New report on murder of Gerard (16) 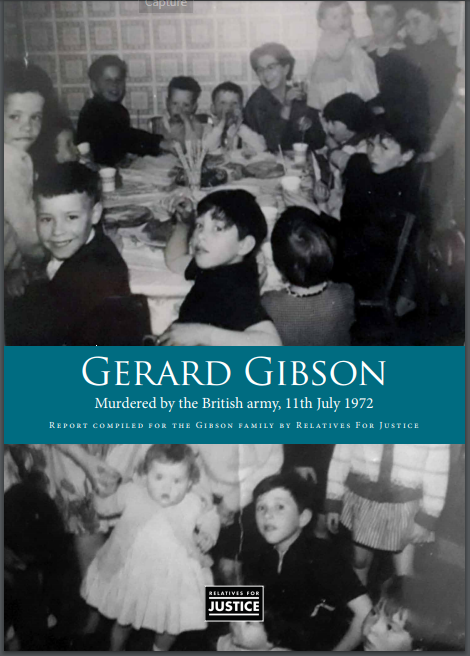 THE FAMILY of a murdered Lenadoon teen and victims’ group Relatives for Justice have united to produce a special report into the circumstances of the boy’s shooting and the family’s long campaign for accountability.
Gerard Gibson (16) was shot dead by the British army on July 11, 1972. An initial finding by the RUC that he was armed and had been killed by a weapon misfire or a device exploding has always been angrily rejected by his family. The RUC version of events was rubbished and the family vindicated by a recent finding that Gerard had indeed been shot.
The report will be launched on Wednesday, November 14 at an event in Lenadoon where members of the Gibson family and RFJ will speak
Mary McCallan, a case worker at RFJ, explained: “Gerard Gibson, a 16-year-old boy, was shot and killed on the 11th July 1972 at Carrigart Avenue in Lenadoon by the British army. The original investigation by the RUC maintained that Gerard was killed by a misfire or explosion of the weapon he was alleged to have been holding and trying to use.
“The Gibson family has consistently challenged this version of events, and recently received official confirmation that Gerard was indeed shot by the British army. This new report draws together all the available information about the case, setting out how Gerard was murdered, the systematic failures the family have endured in attempting to get an effective investigation in this case, and their battle to hold those responsible accountable. This significant date (the November 14 launch) is Gerard’s birthday, he would have been turning 63 on that date had he been spared.”
Patrick Gibson, Gerard’s brother, appealed for anyone with information about the shooting to come along and speak to the family in confidence at the event.
“It’s 46 years now since he was taken from us,” he said. “You have these gatherings and you never know if it will be just family who attend but we know a lot of people who knew Gerard, and some who even witnessed his death are still living in Lenadoon.
“We especially extend invitations to those people who were there that day, July 11, 1972, to come forward and speak to the family in confidence, and to anyone with any information which could help our case.
“We need your help to get justice for Gerard and his family. It has been 46 years since his murder and the family deserve justice, truth and finally closure.”
The report will be launched at Glen Community Centre on Wednesday, November 14 at 7pm and will be addressed by Margaret Gibson, Gerard’s sister, and Mary McCallan from Relatives for Justice.
Everyone is welcome to attend, particularly those who would have known Gerard and his family from the Lenadoon and Turf Lodge areas. Hard copies of the special report will be available on the night, with light refreshments provided.