NIFL Premiership: Cliftonville come from behind to defeat Carrick Rangers 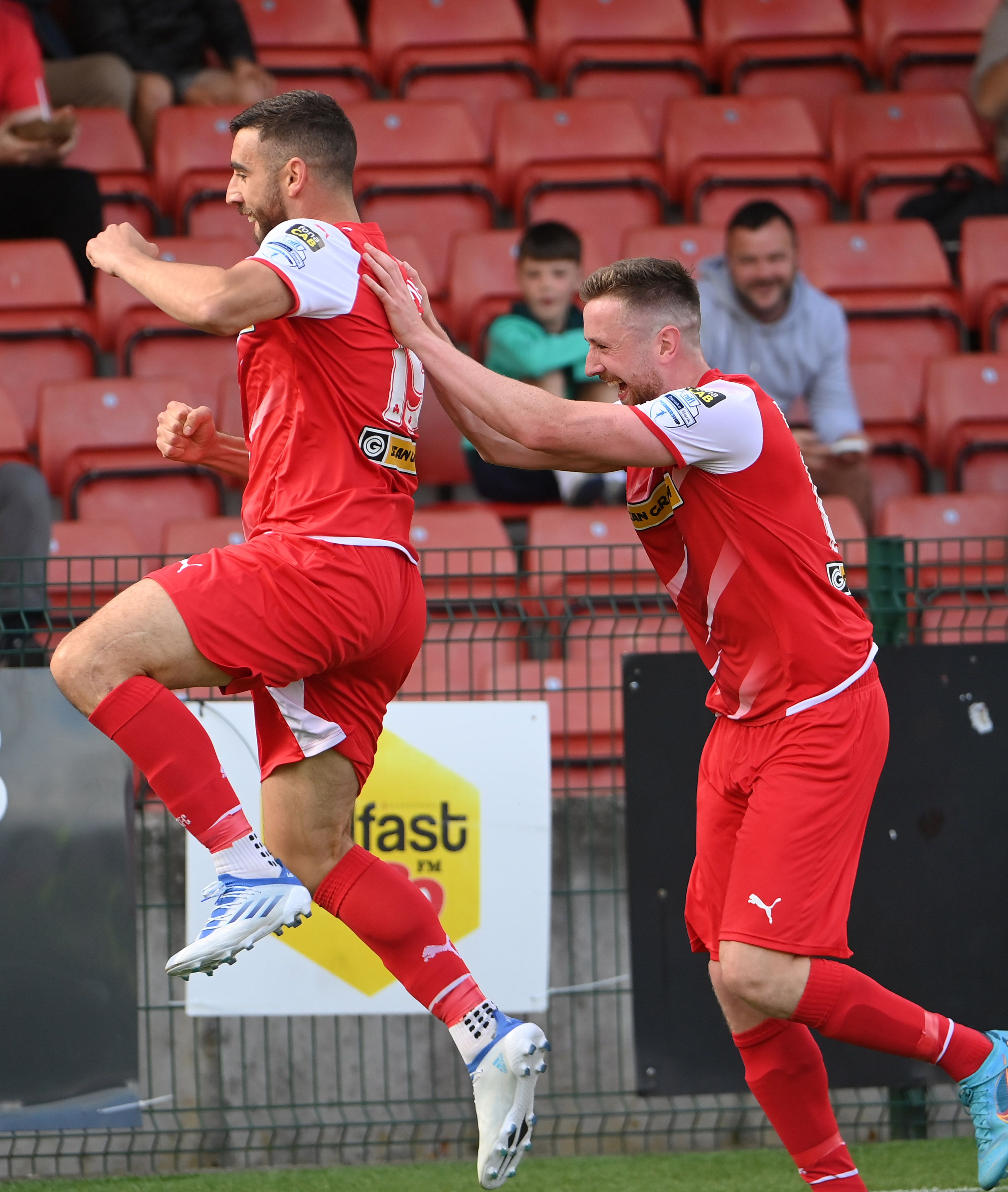 CLIFTONVILLE came from behind at half-time to claim their first win of the season with a 3-2 victory over 10-man Carrick Rangers at Solitude on Saturday afternoon.

Ronan Hale had given the hosts an early lead inside of eight seconds, but despite their domination they were hit with a double sucker-punch at the end of half as Lloyd Anderson levelled and a deflected David Cushley free-kick gave Rangers the lead at midway.

The Reds pulled level through a Ryan Curran penalty early in the second half and the visitors were reduced to 10-men when substitute Mark Surgeneor caught Stephen Mallon with a nasty tackle.

Joe Gormley would come off the bench to seal the win for Paddy McLaughlin’s side as they finished on a the right side of a five-goal thriller.

McLaughlin revealed the goals conceded before the break didn’t alter his half-time team talk and called for more ruthlessness from his side at both ends of the pitch.

“We didn’t really change much of what we were going to tell them,” admitted McLaughlin.

“We were planning on telling them to keep dominating the ball and keep creating chances, so that message didn’t change. The only thing we added in was that we had to be more clinical in both boxes.

“The chances that we were creating, we should have at least taken one or two of them and that would have put the game to bed right and early. The more we missed chances, you’re always going to be suspect to a counterattack or suckerpunch and it happened twice.

In the wake of their disappointing reversal at Coleraine the week before, McLaughlin rang the changes.

Nathan Gartside made his debut in goals, while Colin Coates came into a rearranged back four in the absence of Levi Ives (injury).

Stephen Mallon replaced Jamie McDonagh on the wing and Joe Gormley was forced to settle for a place on the bench as Rory Hale came into the starting 11.

Cliftonville came flying out of the blocks and hit the front inside of nine seconds at Solitude.

Ronan Doherty clipped a high ball forward and whilst Carrick Rangers appealed for an offside flag, Ronan Hale attacked the ball and his hooked over-head kick beat Ross Glendinning to make it 1-0.

The hosts were dominant and Stephen Mallon did well to keep the ball in play and burst down the channel before pulling the ball back to Rory Hale who somehow flashed a shot wide of the target.

Goalscorer Hale then missed the opportunity to double his and Cliftonville’s account from another Doherty through ball, though the striker lifted the ball over the bar.

Just after the midway point in the half, Mallon fizzed in a low cross that Glendinning parried, the loose ball fell invitingly for Luke Turner, but the left-back snatched at the opportunity.

Glendinning was called into action before the half-hour mark, clawing away a Ronan Hale free-kick that looked destined for the top-corner.

The hosts last opportunity in the half fell to Kris Lowe, but he made a mess of a fabulous opportunity, and it was one he would rue.

Carrick Rangers had barely featured in proceedings, though they pulled level on 39 minutes. Curtis Allen drifted inside and clipped in a right footed cross which Lloyd Anderson glanced into the corner of the net past Nathan Gartside to level.

The Amber Army stunned the Reds and hit the front a minute before the break, winning a free-kick on the right. Andrew Mitchell teed up David Cushley whose low effort took a deflection off Ryan Curran and wrong-footed Gartside to make it 2-1 at the break.

Rangers started the second period brightly, but on 53 minutes Cliftonville had the chance to restore parity when Stephen Mallon clipped in a cross from the right and referee Declan Hassan spotted Luke Turner being bundled to ground at the back post and pointed to the spot.

Ryan Curran seized responsibility and made no mistake, firing down the middle past Glendinning to make it 2-2.

Things went from bad to worse for the Gers as first half substitute Mark Surgeneor scythed down Stephen Mallon and referee Hassan didn’t hesitate in producing a red card.

The Reds tried to make the most of their numerical advantage and almost hit the front from Ronan Hale’s corner that was met by Jonny Addis at the back post, but Rangers scrambled it clear.

Stephen Mallon fired in a cross from the right towards Gormley. The ball didn’t fall for him initially, but Gormley poked the ball home at the second time of asking to open his account for the season and complete a turnaround.

Jamie McDonagh almost sealed the win with a fierce snapshot that just rose over the angle of post and crossbar.

At the other end, 10-man Rangers thought they had salvaged a share of the spoils when Ben Tilney rolled the ball past Gartside and into the corner of the net, only to be denied by the offside flag.

Cliftonville thereafter saw out time to claim all three points and open their account for the season. 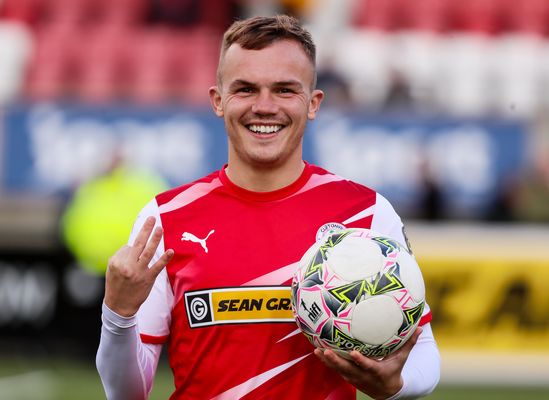 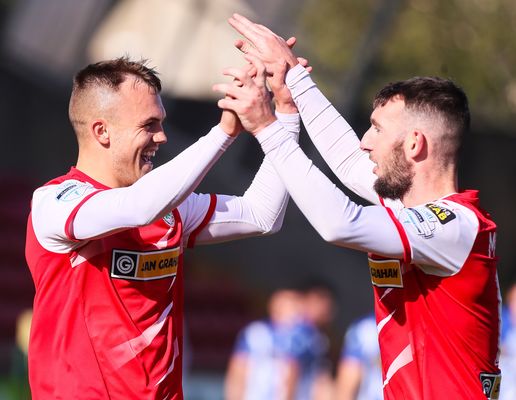 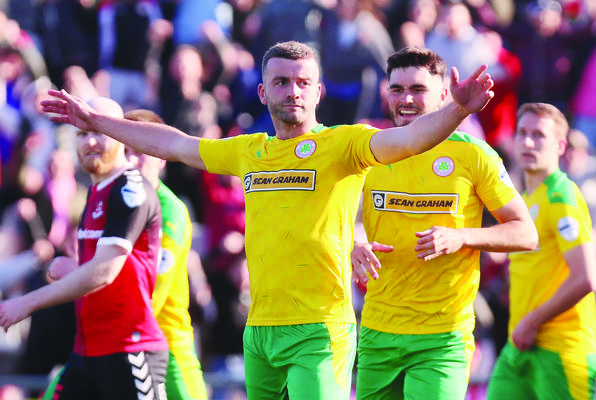