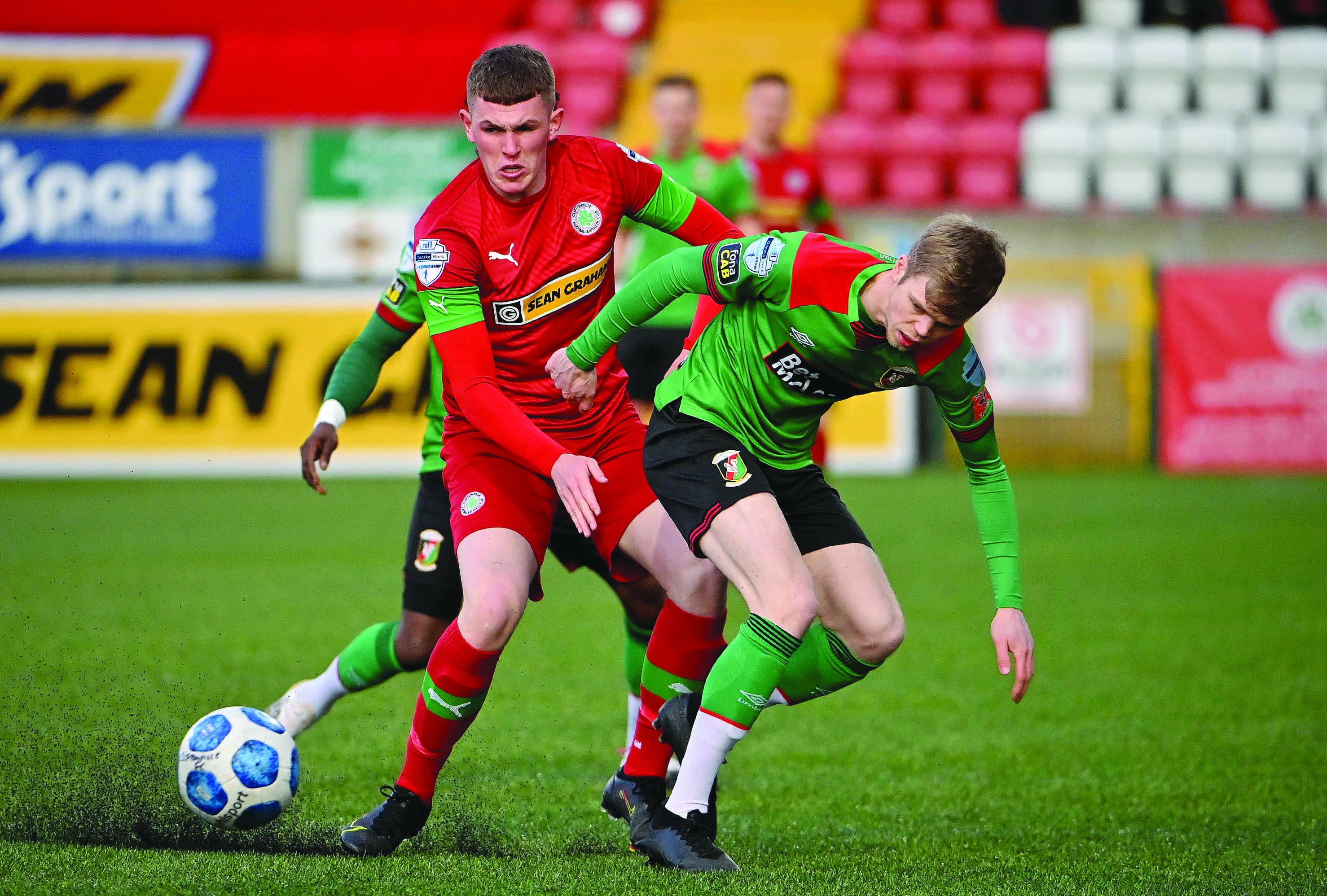 CLIFTONVILLE first team coach Kris Lindsay believes that Carrick Rangers will come to Solitude with no fear on this afternoon.

The East Antrim side travel to Solitude (3pm kick-off) looking to move away from Dungannon Swifts at the foot of the league table.

With no relegation this season the ’Gers could be forgiven for relaxing and seeing the current campaign out, but Lindsay believes there are still a number of factors that will see Niall Currie’s side travel to North Belfast intent on gaining all three points.

“You’ve seen how dangerous that they can be, they beat Crusaders at Seaview and they’ve got results against bigger teams. They’ll come here with no fear and give it a rattle.

“We know it will be difficult and we know that we will have to be on top of our game. I’ve no doubts that we will recover from tonight (Tuesday) and go again and get all three points on the board on Saturday.”

Tuesday night’s 2-0 defeat to Glentoran saw Reds boss Paddy McLaughlin dismissed at the final whistle for complaints surrounding a possible foul on Ronan Doherty in the build-up to the opening goal.

When asked on his view on the incident, Lindsay’s initial reaction was that it was a foul, but he felt his side could have defended better as play developed.

“It looked like there was a foul in the middle of the park in the build-up, I haven’t seen it again, but in real time it looked like the ref had a decision to make and obviously he doesn’t give it,” Lindsay added.

“The first goal was always going to be important in this game, whoever got it - it was going to be a big turning point.

“I thought once Glentoran got the goal they were going to be happy to see it out and didn’t really try to go forward. I know they caught us on the break for the second goal because we were pushing at that stage. The first goal was vitally important and, unfortunately, Glentoran got it.

Defeat also came at a cost with Ryan O’Reilly needing to be subbed at half-time and further knocks sustained by Aaron McCarey and Daire O’Connor.

Lindsay stressed the importance of squad depth in the coming weeks and has called on players to step up and take the opportunity when it arrives.

“That’s the difficulty that are there a lot of games now,” said Lindsay.

“We had our run post-Christmas with the number of games, but we’ve still had a hell of a lot of games recently. With the run of form we’ve been on it’s pretty much the same players playing week-in, week-out.

“Unfortunately we’ve picked up a couple of niggles and it’s impacted the game. Those things happen and it’s important that we recover properly and move-on.

“This is where squads come in, we are a part-time club and it’s a little bit easier for the full-timers because they can recover and they can do things properly, while our lads our out working.

“We’ve got to deal with it and squad will have to be utilised and that’s why the players are at the club.

“They’re good players and there will be opportunities  for everyone between now and the end of season and it’s up to boys to go and perform and no doubt that they will be able to.”

Lindsay is also adamant that they won’t push the panic button in response to a first defeat in seven games and predicts there will be further twists and turns in the coming weeks as the race for Europe hots up.

“It was a disappointing result, but it’s our first defeat in seven games,” Lindsay admits.

“The players are frustrated, they’re disappointed of course they are, they want to win games of football matches and that’s a good thing.

“What’s important is that we pick ourselves up and go again on Saturday against Carrick for another difficult game, but another game that we’ll be targeting three points.”

“There are six league games left and there is going to be plenty of twists and turns left in this league.

“You look at the games on Saturday, we play Carrick which will be difficult, Glentoran play Larne and Ballymena play Coleraine. Teams are going to take points off each other.

“Our season is still building, we want to finish as high as we can, whether that be automatic European qualification or as high up as we can to get a home tie in the play-off at the end of the season.”