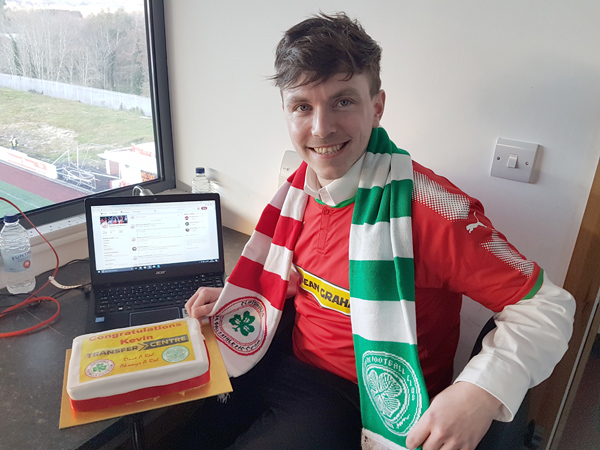 ON THE MOVE: Cliftonville fan Kevin Kelly will take up a new media role with Celtic FC

A CLIFTONVILLE Football Club social media guru is set for a big transfer to Glasgow after landing a job with Scottish football giants Celtic.

Cookstown native Kevin Kelly, who assisted with the popular ‘Reds By The Minute’ Twitter account landed the role where he will record and create content for the Celtic’s website, social media and in-house subscription channel, Celtic TV.
The 26-year-old oversaw his last Reds game last weekend as they suffered a 2-1 defeat to rivals Linfield at Solitude.

As well as helping provide matchday updates for supporters across the globe this season, Kevin was also on hand to capture behind-the-scenes imagery, transfer developments and footage from official club functions.

Kevin – a massive Celtic fan – is relishing the switch to Glasgow to take up a similar role with the Scottish champions, starting in March.

“I wasn’t really looking for a job but I saw it advertised on Twitter and I thought I would send my CV in and see what happens,” he explained.

“Being a Celtic fan, it was obviously appealing and once I got a second interview, I thought there might be something in it for me.

“I will be recording and creating content for the web, social media and Celtic TV.
“I wouldn’t have got the job if it wasn’t for volunteering and doing Reds By The Minute on a Saturday. It gave me the experience I wouldn’t have got anywhere else and I am sure it is what got me the job in the end.

“I owe a lot of gratitude to Cliftonville and I will use my experience with Celtic to report back to them and try help them out in any way I can.”

A spokesperson for Cliftonville FC said: “Everyone at Solitude wishes Kevin well at Celtic Park and we extend an invitation for any fans interested in becoming part of Cliftonville FC’s social media team to get in contact by emailing web@cliftonvillefc.net.”

Follow @RedsByTheMinute for minute-by-minute text commentary on all Cliftonville’s home and away matches.