Return of the native as a pine martin is spotted 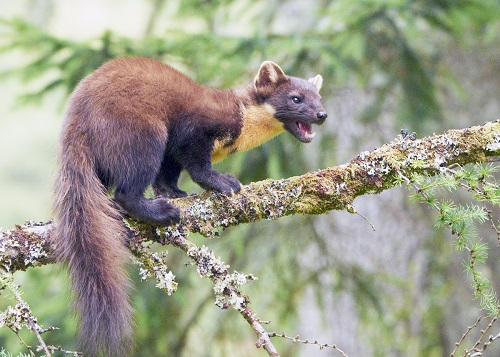 Dúlra’s heart missed a beat when he got the anonymous text from a reader – “I saw a pine martin in Colin Glen – have video”.

The pine martin is perhaps Ireland’s rarest animal. It was going the way of extinction like the Irish wolf, the lynx or the boar but just managed to cling on in some of our remotest, most inhospitable glens and mountainsides along the west coast.

We can guess that around 50 years ago, there would have been no more than a couple of hundred. It’s a guess because this animal is rarely seen. It likes to hunt at night and keeps a safe distance from people – and for good reason.

It had the misfortune of having a beautiful coat and for hundreds of years, people craved that fur. And so it was hunted down and killed in every Irish county. And gamekeepers in big estates also had a zero tolerance approach to it, trapping, poisoning and shooting pine martins as soon as they appeared because they targeted birds.

But finally, in 1976, the pine martin’s fortunes suddenly changed. A law was brought in in the Republic banning their prosecution, and it’s incredible the effect official protection had.

It wasn’t a sudden explosion in population. After all, this animal doesn’t breed until it is aged three for a male and two for a female. And it has just two or three young each year. But today, it seems we are witnessing a sea change that has even brought this wonderful, secretive animal to the borders of west Belfast.

Dúlra’s never had the privilege of seeing one, and he doubts he ever will. He’s seen stoats on Colin Mountain and a mink in Donegal, but they are all small beer compared to the pine martin. Its Irish name gives us a clue about its size – the cat crainn, or tree cat. Because this animal is huge compared to the common stoat.

Its return to our countryside is a lesson on the benefits of what is being called rewilding, where the countryside is returned to nature and extinct species are reintroduced.

Environmentalists happened by accident upon an unexpected benefit of the expanding range of the pine martin in the Midlands when they realised grey squirrels were vanishing and the native reds making a comeback from the brink of annihilation.

Harmony
Despite millions of pounds being spent, largely futilely, on trying to eradicate the American grey squirrel from Ireland, nature in the guise of the pine martin was doing the job for them.

Pine martins and red squirrels had lived successfully side by side, if not in harmony, for thousands of years in Ireland. The greys didn’t know what hit them when they were attacked by these tree-climbing predators. They were naive and paid the ultimate price, while the native Irish reds were much more streetwise and the pine martins couldn’t do as much damage to them.

And so, if the report of a pine martin in Colin Glen is correct – and Dúlra has yet to see the video – it could also mean that the red squirrel will be hot on its heels.

Now, reader, what about that video? If it’s true, you’ve just made Dúlra's Christmas.

Ann, Beechmount: I saw the picture of the snow bunting on your page a few weeks back. I realised it was just like the bird I saw at my garden table. The water I left out was frozen and it flew away. I changed the water but it never came back. Could it have been a snow bunting?

Dúlra writes: It’s possible Ann, but I have to say unlikely as snow buntings prefer our freezing mountain tops to our friendly bird tables. Keep your camera handy and if it returns, take a picture. Dúlra is occasionally wrong!