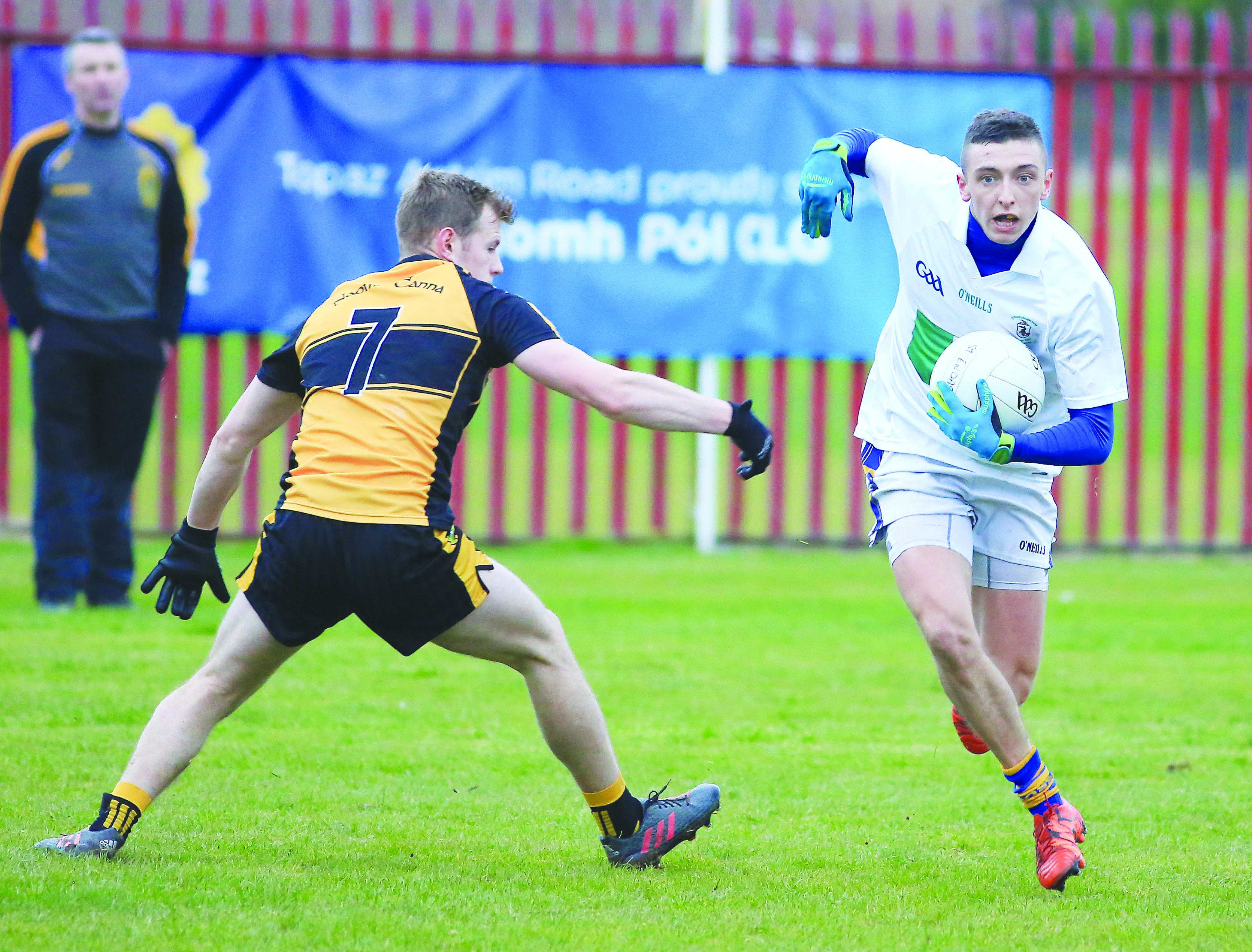 Rossa’s Sean Pat Donnelly gets away from St Enda’s defender Peter Healy during the U21 Football Championship semi-final between the sides last month. Both players are among 14 debutants included in Antrim’s panel for the forthcoming Dr McKenna Cup

ANTRIM will run their eye over a host of new players during the forthcoming Dr McKenna Cup with over a dozen debutants included in the squad.

Last week’s draw in Belfast’s Fitzwilliam Hotel pitted the Saffrons against Monaghan, Fermanagh and St Mary’s in Section B of the pre-season competition.

Recently-crowned U21 champions Aghagallon have been rewarded for a fine 2016 campaign which also saw them plunder the Intermediate Football Championship and the Division Two title with four call-ups – namely Pat Brannigan, Oisin Lenehan, Eunan Walsh and Ruairi McCann.

A number of established stars from Cargin won’t feature in the McKenna Cup following their extended double-winning season which ended with a five-point defeat to Killyclogher in the Ulster Club Championship.

“This is the time of the year to get fellas into the squad to get a look at them,” said Fitzsimons.

“There are a lot of fresh faces in the squad.

“The lads from Cargin were disappointed with how their season ended. I expected them to go far further in Ulster myself to be honest.

“When you lose games like that, it is hard to take so they will be taking a good rest.

“We will hopefully get those guys back in towards the end of the McKenna Cup but we have a lot of players to look at in the meantime.”

Fitzsimons and Adams trawled the county in search of fresh talent as Antrim aim to build on a promising 2016 season which saw them gain promotion from Division Four.

A lack of scoring power up front seemed to limit Antrim’s ability during the Championship as they suffered defeats to Fermanagh and Limerick.

This is something which the management duo have sought to rectify over the winter months and Fitzsimons is relishing getting another chance to defeat the Ernemen.

“It is a tough draw. We owe them one – more than one. Fermanagh are a great team,” added the Antrim boss.

“They have been playing really well over the last few years.

“We have been looking at a lot of players during the Championship and we have brought in some good scoring forwards – Seamus McGarry from Aldergrove is as good a finisher as there is. Sean Pat Donnelly (Rossa) is another one.

“There is a lot of good, young and exciting talent in the county at the minute. I think this is a good time to blood young lads and see if they want it. We have had a great reaction from the players – they want to play for the county and that’s want you want.”

Antrim will also be without the services of a number of university players including Matthew Fitzpatrick (St Mary’s) and Ulster University duo, Niall McKeever and Ricky Johnston.

Fitzsimons added that he hoped Glenavy’s Owen Gallagher, who is currently studying at NUI Galway, would be available at some point in the 2017 season.

Antrim will open their new campaign against the students of St Mary’s on Sunday, January 8 at Corrigan Park.

One week later, they will host Monaghan at the same venue before ending with a trip to Brewster Park to take on Fermanagh on Wednesday, January 18.

Meanwhile a motion from St John’s to extend the Antrim hurling leagues to three 10-team divisions was defeated at Monday night’s county convention at Dunsilly.

The remaining four motions were deferred. Sarsfield’s clubman Paul Molloy was elected unopposed to the position of development officer after Jim Murray stepped down last week.