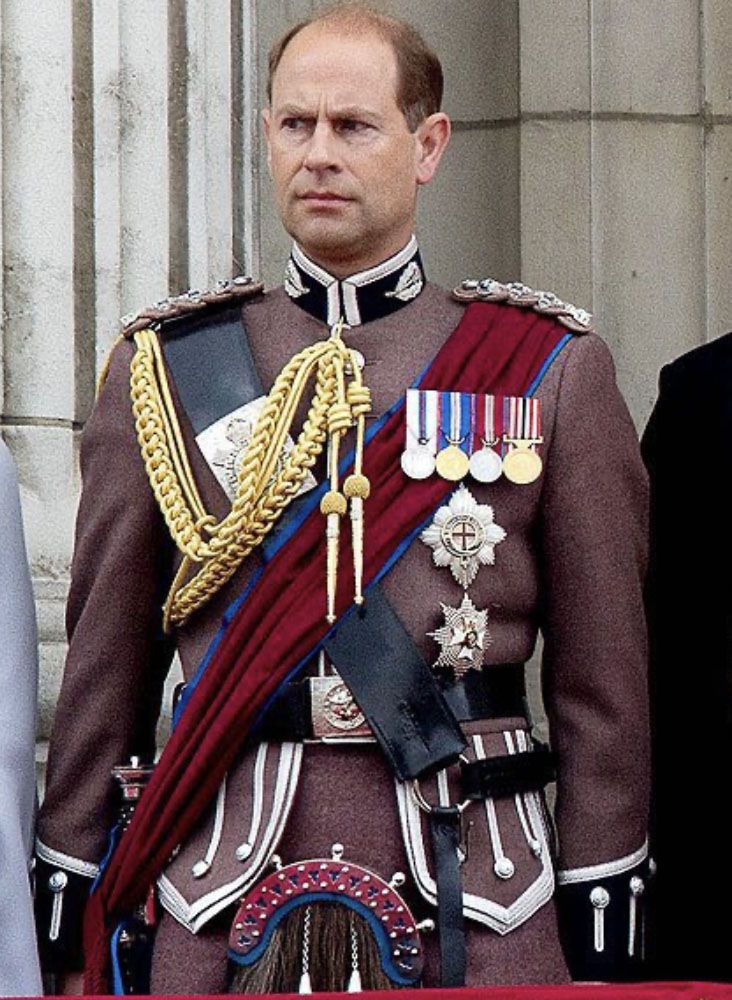 HERO: Edward got these splendid medals for... two weeks in the Marines

Elite remembrancing has swept across the kingdom

ACROSS the realm other examples of elite-level mourning were to be seen.  Outside the Palace of Westminster police swooped to remove a woman armed with a Panama hat and a cardboard sign reading ‘Not My King’. Five officers displayed commendable mournfulising by shifting her away from the Palace out of  the gaze of the thousands likely to be left devastated by her sickeningly graphic placard.

The English Premier League, the Scottish Premier League and the Northern Ireland Premier League tripped over each other to be first to call off matches – with loyal Ulster thrillingly winning the race by announcing the sold-out Cliftonville-Glentoran game was off two hours before most of us knew the queen was dead.  Why rugby, golf and cricket went ahead is anybody’s guess. Even horse-racing – the only sport which the queen took anything to do with – cracked on after a short acknowledgment on Saturday.  It was the minute’s silence, wasn’t it? That’s the best guess. The rugby, cricket, golf and St Leger toffs were always going to observe a silence immaculately, but since soccer is a sport that attracts the wrong kind of crowd, who knows what’s going to happen when the stadia riff-raff are asked to fall silent?

Big shout-out to Norwich Council, which banned bicycles from the town centre, and those hospitals which have called off cancer operations on the day of the funeral. It’s what Her Maj would have wanted.

The most wince-worthy job of the week was that given to the flunky who was asked to write a statement on behalf of Royal Parks (ie some of the land William the Lionheart or Edward the Conqueror stole off somebody once). The statement asked the public to stop leaving Paddington Bear cuddly toys at places of remembrance; it also requested that the people stop leaving marmalade sandwiches too, although it pulled up short of suggesting that they give food to food banks instead of a recently deceased billionaire.

Hello! Could you maybe deliver those marmalade sandwiches to people who need them rather than leaving them outside a palace? Thanks.

We’ve seen already how Prince Andrew was banned by the terms of his Royal Exclusion Order from wearing a uniform in the royal procession through Edinburgh and we know that he will similarly be required to wear his Savile Row suit of arrows at the funeral while everyone around him is dressed like a Ruritanian general. But an exception is to be made to allow Andy to wear a uniform during the vigils in Edinburgh and London. No such exception is to be made for Prince Harry, who is banned from wearing a uniform at all times during the remembrancing marathon.

So to recap: man who got £12 million from the Balmoral Credit Union to make underage sex charges go away is given temporary permission to dress up like a Battle of Waterloo commander; man who left the royal family because they refused to do anything to protect the mental health of his wife is allowed no such consideration. Meanwhile, Edward, who ran home to Mama after two weeks in the Marines, has the most splendid uniform of all. Nice.

Finally, another GB News presenter, another example of opinion incontinence. Darren Grimes, the highly excitable pet northerner of the right wing of the Tory right wing has been inconsolable in the past few days. He tweeted re King Charles: “‘May flights of angels sing thee to thy rest,’ says His Majesty the King,  quoting Shakespeare, as he bids his mother, Her Majesty the Queen, a final farewell. It sent shivers up my spine and placed tears in my eyes.”

Darren’s affection for Charlie goes back a long way. As far back as July, matter of fact, when he wrote a piece for the GB News website, which while not as eloquent or grand as Shakespeare’s flights of singing angels, spoke volumes about the esteeem in which he holds the new king.

“But I must tell you, folks, in my eyes, His Royal Highness The Prince of Wales, Prince Charles to most, is less Crown Prince and more Clown Prince.”
God save the King!

A dead bigot, a Catholic and a BBC presenter walk into a bar...


“I, Charles the Third, by the Grace of God of the United Kingdom of Great Britain and Northern Ireland and of My other Realms and Territories, King, Defender of the Faith, do faithfully promise and swear that I shall inviolably maintain and preserve the Settlement of the true Protestant Religion as established by the Laws made in Scotland in prosecution of the Claim of Right and particularly by an Act intituled “An Act for securing the Protestant Religion and Presbyterian Church Government” and by the Acts passed in the Parliament of both Kingdoms for Union of the two Kingdoms, together with the Government, Worship, Discipline, Rights and Privileges of the Church of Scotland. So help me God.”

HAVING solemnly sworn to uphold the ancient royal family tradition of not having a Taig about the place. King Charles with his family accompanied the queen’s coffin to St Giles’ Cathedral in Edinburgh for a service of remembrance.The BBC, doing solemn and respectful as only the BBC can do, followed the convoy as it made its way from the Highlands to the Scottish capital and the presenter and two guests treated the viewers to some fascinating insights into the history of the cathedral – and the current state of the BBC.

Have @BBC & @BBCScotland issued an explanation & apology for this? They do for much lesser things.

"John Knox of course being your great Scottish Protestant reformer. Who cleared the Catholics out of Scotland." pic.twitter.com/SQGhlUSUIv

“John Knox in there as well,” remarked one pundit, “full of dramatic...”
Another pundit intervened: “John Knox of course being your great Scottish Protestant reformer who cleared the Catholics out of Scotland.”
Pundit 1 rather uncertainly added: “That’s, ah, how history remembers him.”

It must have come as a bit of shock to the Catholics of Scotland to learn that they’d been cleared out in the 16th century, but the historical rigour or otherwise of the contributions wasn’t what was occupying the female presenters. She replied at the end of the exchange: “Ha, Ha,” she said. “Ha, ha, ha,” said pundit 1. “Ha, ha,” said pundit 2. “Ha, ha., ha, ha, ha, ha.” continued the presenter. Not entirely sure what the punchline was here, to be honest. Is there something about the concept of medieval religious cleansing that’s funny and that Squinter has somehow missed? Was it an attempt at Frankie Boyle-style up-yours comedy? Might there be a Friday night BBC2 series to be made out of it? With the management of the BBC infested with Tories, that’s not something that can be ruled.

Anyway, social media was quick to bring the matter to the attention of the Beeb, but whether they’ve done anything about it yet Squinter can’t say. But he will say that the chance of swift action might have been a little bit higher if the presenter had been Naga Munchetty.


PRINCE Andrew is pictured above following the coffin of his mother along the Royal Mile in Edinburgh. To his right a young man has his hands cupped round his mouth and is shouting: “Andrew, you’re a sick old man!” As Edward insults go, this was decidedly tame.

After all, the eighth in line to the throne (or is it ninth?) just got twelve million quid from the Balmoral Credit Union which he paid in an out-of-court settlement to make a woman who accused him of child sex trafficking and rape go away. You’ll notice that Andy’s the only old geezer in this line-up who’s not wearing a Gilbert and Sullivan comic opera uniform. That’s because, as the BBC helpfully but coyly informed us, he’s no longer a “working royal”. And he’s no longer a working royal because – all together now! – the women whose coffin he’s following decided he’s too disgraced and damaged to be allowed out in public.

BREAKING: A man has been arrested after a protester shouted at the procession accompanying the Queen’s coffin up the Royal Mile in Edinburgh.pic.twitter.com/xBphyRT3Nq

With the possible exception of Edinburgh, where it appears that Britain’s best-known and best-spoken nonce remains a stand-up guy. You might have thought that somebody pointing out that there’s a nonce just yards away from a crowd of children would deserve the thanks of the onlookers, but Edinburgh didn’t see it that way. Two rather burly chaps, determined to allow Andy to continue his walk without further awkward reminders, hauled the young man unceremoniously away and hurled him backwards towards waiting policemen, who duly took him away and handcuffed him. What the charge or charges will be is anyone’s guess. Telling the truth in a public place? Pointing out the bleedin’ obvious in a way that causes alarm or distress?

GB News presenter Dan Wootton was so broken up about the death of the queen that he decided to get away from the wobbly, ill-lit studio for a while and go do some world-class respecting (right). “I wanted to return to Buckingham Palace today for some quiet reflection and lay my own tribute,” he wrote on Twitter. “Crowds, young old, from all ethnicities and backgrounds. Truly the best of British doing her justice.”

In order best to effect his quiet reflection he brought along someone to film it for him. Nothing wrong with that – pictures of people signing books of condolences and performatively mourning in countless other ways have been the order of the day. But wait. What’s this? Why it’s a Dant tweet from November 2020 about Prince Harry and Meghan Markle. (Heads-up: Dan’s bitter obsessing about Meghan makes Piers Morgan look positively restrained.) The royal couple were pictured placing wreaths in a cemetery on Remembrance Sunday – a bit of Dan-like quiet reflection, you might say.

I wanted to return to Buckingham Palace today for some quiet reflection and lay my own tribute.
Crowds young, old, from all ethnicities and backgrounds.
Truly the best of British doing her justice. pic.twitter.com/Uz8Vok3YN2

But Dan didn’t see it quite like that. “How lucky,” he tweeted in response to the picture, “that a photographer happened to be here to capture this deeply personal moment.” Indeed. Clearly the emotion had so got to the Kiwi frontman that he forgot that he’d hauled someone along with him to film his deeply private moment of quiet reflection. NB: Dan ‘Four Takes’ Wootton hates ‘virtue signalling’ almost as much as he hates Meghan.