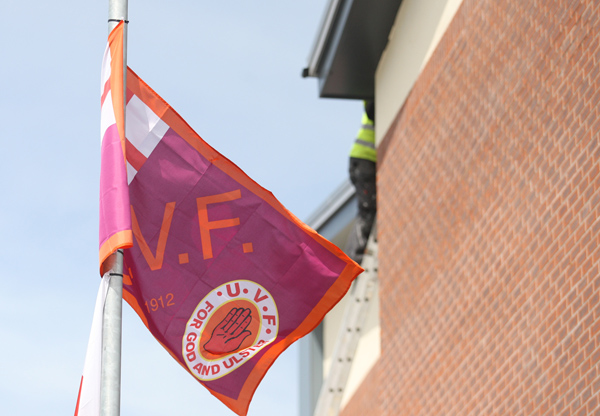 FACING her first controversy after being elected the new MP for South Belfast, the DUP’s Emma Little Pengelly has responded to the erection of UVF flags at a mixed housing estate in the Cregagh/Ravenhill area by saying she has found no demand for them to be removed.

The UVF flags and various union flags were erected in recent days in Cantrell Close and Global Crescent where homes were built as part of the Together: Building a United Community initiative of the Executive Office, designed to increase social cohesion and address the problem of divided communities across the north..

In a statement issued after a visit to homes in the area on Monday, Mrs Little Pengelly said: “After being asked to comment on a public story in relation to flags, I felt it was important to speak to as many residents as possible to ask what they wanted me to do. I did this with an open mind, cognisant that the people who are most important in this are the residents of the development. I spent somce considerable time speaking to many people, not only on this issue, but on a range of matters.

“There were a wide range of views within that community. The overwhelming majority wanted me to work with the housing association, residents and others on a range of issues and did not want this issue to be escalated in the public forum. I will be respecting their wishes and will continue to work for them on these matters. I also emphasised that no person should feel intimidated and to speak to me confidentially at any time for help and support.”

Mrs Little Pengelly later told the BBC in a radio interview: “There were some people who were very supportive of the flags, people who felt very much it was part of the tradition of the local area and the wider area. The majority of people said to me, ‘We understand that the flags have gone up, but we also understand that they will come back down again.’ Really they didn't want a public fuss around this matter.

“And there were some who had concerns around this, who would prefer for the flags not to be there. The way I would put this is that it was a much more complex picture than I was imagining.

“There were some concerns raised. I reassured those individuals that I would be here to support them as well, I would represent their views to the housing association.”

The PSNI say the flags are not a matter for police. Inspector Duncan McBain said: “Issues surrounding flags are best addressed through dialogue and engagement between agencies, including local police. Police action on its own is not sufficient -–we all need to work together.

“The removal of flags is not an issue for the PSNI. Police will only act to remove flags if there are substantial risks to public safety. We work with communities and partners to respond to any issue where there is a concern for public safety or where a criminal offence has occurred.”