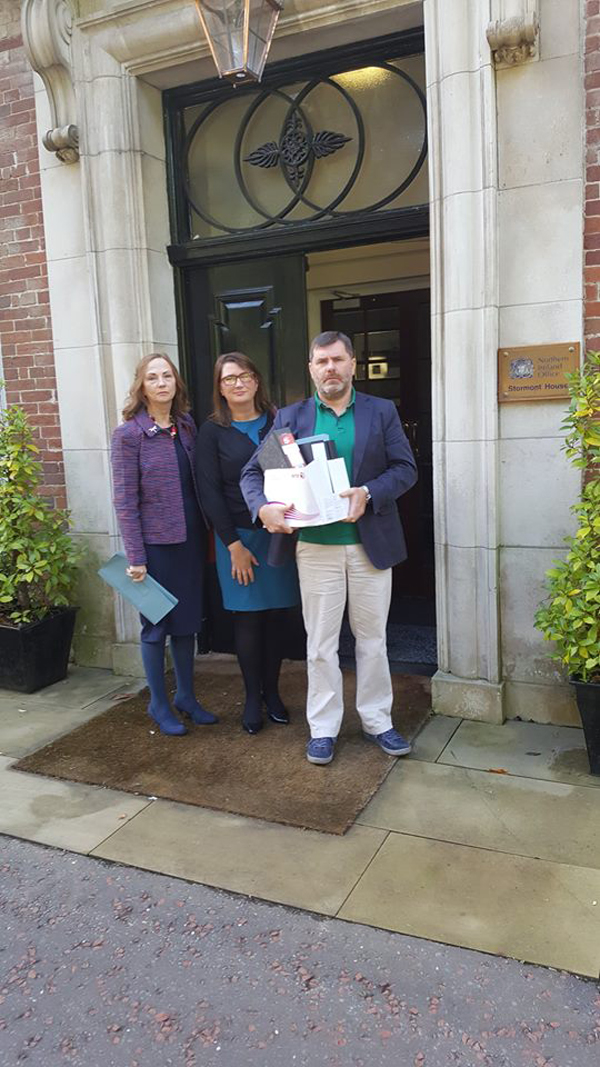 Carmel Quinn, Andrée Murphy and Mark Thompson with RFJ’s collusion report, the de Silva review of the murder of Pat Finucane, John Stevens’ third report on collusion and the Cory reports on collusion, which they presented to the British Secretary of State

REPRESENTATIVES from victims’ support group Relatives for Justice (RFJ) have told the new British Secretary of State that the immediate release of funds to enable legacy inquests to take place would create “a positive momentum” to move forward the Stormont House Agreement.

Following a meeting with James Brokenshire at Stormont House on Monday, RFJ Director Mark Thompson said the organisation stressed the importance of implementing the agreed mechanisms within the SHA.

“Despite the position of the Secretary of State that his intentions are to ‘persuade and encourage a positive environment on the past’ we argued that the families of state violence and collusion witness the intent of the UK government in courts every week through continual processes of denial and delay, the failure to disclose information, the failure to trace soldiers and policemen involved in killings, and the destruction of evidence,” said Mr Thompson. “This, we said, was the ‘national security’ experience.’

“We also raised the matter of a statement of acknowledgement for the victims of state violence and collusion. Republicans and loyalists have issued statements to this effect to those they harmed during the conflict. The UK government has yet to make a statement acknowledging the hundreds of killings its police, military and intelligence agencies were involved in. This could form part of the ‘positive start’ that he talked about –notwithstanding current cover-up.

“In response to public statements by the SoS at the recent Conservative Party conference, that he would not allow ‘history to be rewritten’, we strongly pointed out that the narrative in respect of state killings and collusion remains covered up and untold. Our job, we said, was to ensure that this truth is told and fully accounted for.”