When the Rabbie Burns of Ulster marched with the United Irishmen 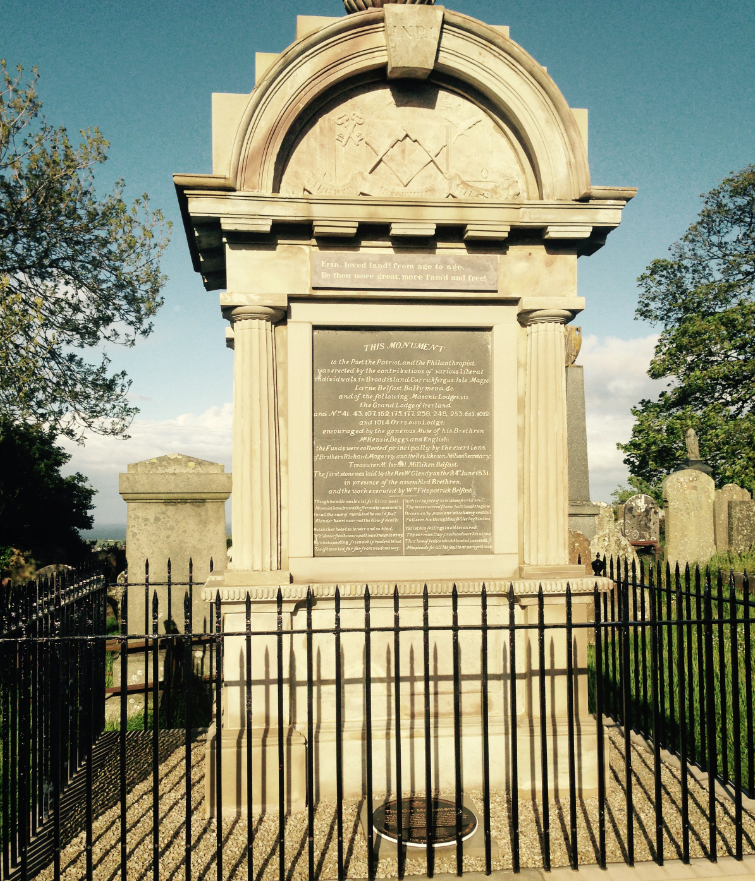 They say you don’t go through Ballycarry, you go to it. Situated between Larne and Carrickfergus, this village might be seen as something of a backwoods but it has an illustrious past and was home to one of the most talented rhyming weavers who flourished in Antrim and Down in the nineteenth century.

Known as the Bard of Ballycarry, James Orr was a contemporary of the great literary idol Robert Burns. Almost two centuries later John Hewitt has argued that Orr was a better poet than Burns, yet he published just one book in his lifetime. Unlike Burns, who was an Excise officer and a member of the Dumfries Volunteers, Orr was fired with patriotic zeal. He was born in 1770 and would have listened to stories of the French invasion in 1760 when three French men o’ war dropped anchor at nearby Kilroot and landed a force of 800 men who attacked the town of Carrickfergus and took over the castle. Their intention had been to take Belfast but a change of plan saw them haul up anchors just a week later to set sail for France only to be intercepted by three heavily armed warships which had set sail from Dublin and routed the French off the Isle of Man, killing over three hundred of them. Orr would also have learned of the formation of the Volunteers some twenty years later. James

Orr never spent a day in school. He was the only son of an elderly couple and he was kept at home as he regarded as “delicate.” His father was a weaver and as well as teaching James his trade he gave him a good education.

As one rhymer wrote:

As I of learning scarce know aught

Nor never have been grammar taught.

Many of the small towns and villages had book clubs at this time and Ballycarry was no exception. The Ballycarry Reading Society had a big collection of “volumes and pamphlets.” Orr has a poem to a rural reading society which names among its collection of books Gibbon, Hume, Dr Johnson and biographies of Washington and Captain Cooke. His father’s membership of the club brought many useful books to his attention as a small boy.

Many of the book clubs were reputed to have been centres of radical thought and sedition and were believed to have contributed to the militancy of ideas which led to the 1798 Rebellion. Some of the clubs were wrecked by the yeomanry and the books burned. The clubs were also places for recreation in story and ballads.

Freemasonry played an important role in the lives of the rural males. James Orr became Worshipful Master of the Lodge which in turn promoted the work of the bards by helping with printing costs. Ballycarry, like many similar villages, had a sense of identity which no longer exists today.

The kirk, the hand loom in the house, the singing sessions, the crossroads meetings, churning the milk and co-operation in farming tasks gave a sense of self containment which has long vanished. The introduction of National Schools whipped away any literary talents which might have surfaced while the introduction of railways, improved roads, cinema, radio and television drained away the peculiarities of such communities and replaced them with a monotonous standardisation.

Orr thrived in his surroundings and became well known and respected for his work. His poems were published in the Northern Star, the Belfast published paper of the United Irishmen, the Belfast Monthly Magazine and The News Letter.

James Orr joined the United Irishmen. The local group were known as the ‘Braid-Islan Corps’ (the parish was called Broad Island) and on June 6, 1798 they marched to Larne where trouble had broken out and the following day to Ballynure and on to the Hill of Donegore outside Antrim town. By the time they had reached Donegore the battle was over and the United Irishmen were in disarray and retreat. They made their way back to Ballycarry . One of the corps, William Nielson, aged just 16, was hanged for his part in the rising and is known as the Ballycarry Martyr. Orr went into hiding. He was known as a ‘fifty pounder’, ie there was a hefty reward of £50 for his arrest. He fled to America but returned in 1802 under an amnesty. However, when he tried to join the local yeomanry a couple of years later he was refused as it was thought he still had republican leanings.

His father died shortly after his return and he carried on the work of the small farm alongside the weaving. He never married and remained a member of the Masonic Lodge. He divided his time between it and the public house. Shortly before he died he asked friends to publish his work and give the profits to the poor of the parish. He died in 1816 at the age of 46 and was buried in the family grave in the churchyard of Templecorran on the edge of the village. ‘The Posthumous Works of James Orr of Ballycarry’ was published a year after his death. Some years later the Masonic lodge erected an imposing monument over the grave with verses composed in his honour by his fellow bard McDowell. There is only one other such Masonic monument in the north of Ireland. Larne Council refurbished the monument last year. Orr was ‘the Burns of Ulster’. His love for Ballycarry was intense.

Farewell to the village, the best on the plain

My poor auld frail folk an’ my lassie sae fair.

The kirk where I promised wi’ folly to part

An’ the inn that ensnared me I lea without smart.

But ach! How the sons of the lodge can I lea

An’ gae to my lang hame – the cauld house of clay.