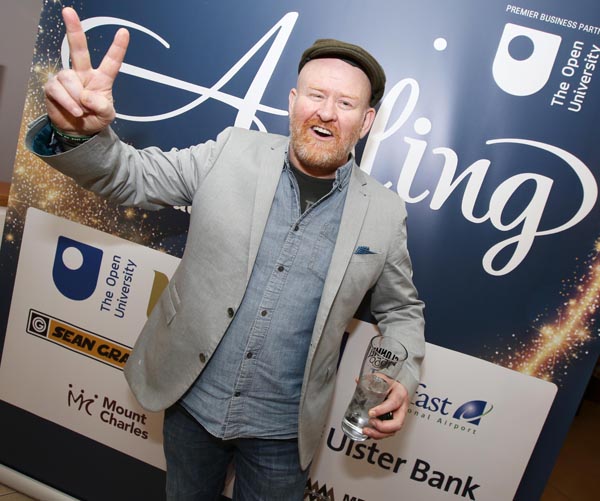 WEST Belfast singer songwriter Joby Fox says he is “completely over the moon” after the big-hearted founder of a local jewellery chain store donated £10,000 towards his Refugee Rescue charity.
The magnificent contribution from Argento founder Pete Boyle came after the prominent businessman learned about Joby’s relief efforts to help Syrian refugees fleeing from their homeland during the annual Aisling Awards gala celebration night.
Joby, who was added to the prestigious Aisling Awards Roll of Honour recipients list for his humanitarian work, addressed the audience on Friday evening telling them of his work, along with other volunteers, to help refugees on the island of Lesbos in Greece since October 2015. Audience members heard how Joby and others from Refugee Rescue had been operating from Lesbos since the refugee crisis broke.
The team has been operating in collaboration with local Greek boats providing skilled sea rescue volunteers from Ireland. In a recently screened BBCNI documentary entitled ‘True North: The Crossing’ Joby explained what drove him to travel to Greece to help the refugees. “Once you are exposed to something like this you feel a responsibility to these human beings, and ultimately that’s what it is about. I am a human being, they are human beings, they need me. Children never asked for this, you know, so that’s my motivation… simple.”
Speaking to the Andersonstown News Joby said that he was “very grateful” for the donation.
“Myself, along with the other volunteers, are just delighted. I mean we are over the moon by Pete’s generosity. At the minute it is costing between €15,000 and €20,000 a month to operate our boat, around €50/60 every half an hour for petrol and the boat is out six hours at a time so that gives you some idea of the costs.
“This donation will help with our operational costs. We project three months ahead at a time and have £20,000 in our bank account at the moment so this will really help us through until at least January 2018,” he said.
On being inducted into the Roll of Honour Joby simply said: “It’s nice to be appreciated for the work that we do. The award is to be shared with the Refugee Rescue team that includes Jude Bennett, Richard Heard, Michael Cecil and of course my partner Sophie.”
Argento founder Pete Boyle explained how he had felt very moved by listening to Joby and the work that Refugee Rescue carry out “and as a company we could help directly by giving financial assistance”.
The Aisling Award winner for Best Business said the Syrian refugee crisis was a subject he felt “strongly about”.
“It’s not like we can just get up and go to help and it was fantastic to hear Joby talk of the work that has been carried out so far and how he and the team are doing something about it. I’m delighted to make the donation on behalf of the company and our employees.”