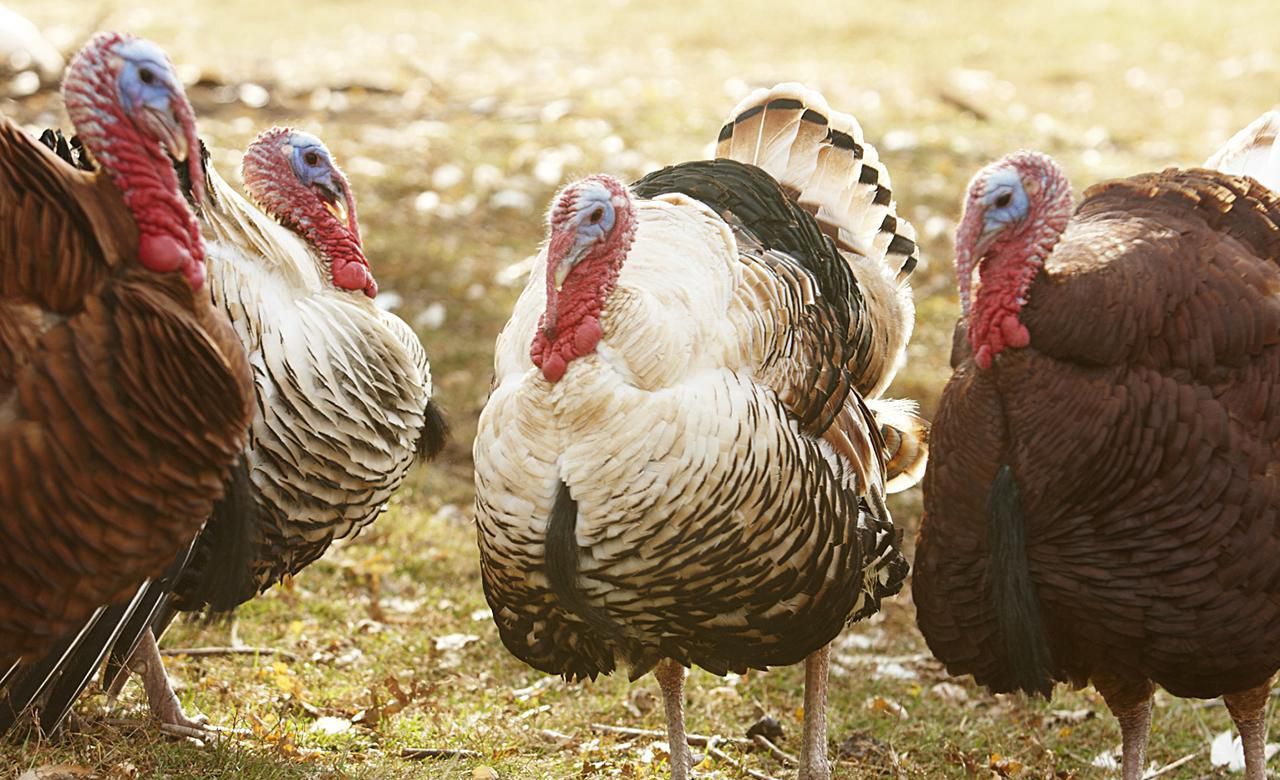 CLUCKING THICK: The turkey is not renowned for its intelligence

THE turkey is an outstandingly stupid bird. Not many people know that. Compared to a turkey, Edwin Poots is Einstein.

I know this because we kept turkeys when I was a child, and they literally hadn’t the intelligence to come in out of the rain. At the first drop, I was sent to shoosh them into an outhouse; left to themselves they’d have stood looking at each other, wondering what this wet stuff was. In the run-up to Christmas my mother sold them all, except for one bad-luck bird which was reserved for our table. If you’re of a nervous disposition, maybe turn away now.

His neck was wrung – not always easy – and he was plucked. Then his corpse was hung upside down for a couple of days. There are few things more naked than a plucked turkey.

In fact we used shoes, not stockings: ten polished pairs side by side on the kitchen floor. As we slept, Santy was downstairs drinking his milk and eating his biscuits before leaving our presents beside or on top of our shoes.

Then, a day or two before Christmas,  my mother would lift the bird down, take the oilcloth from the kitchen table and replace it with old newspapers. After that, with a bucket on the floor beside her, she’d behead and de-claw the turkey, dropping the bits in the bucket. Then she’d slice an aperture where the turkey’s bum had been and shove her hand well up, bringing out fistful after fistful of innards.  Know this:  a turkey in your oven or on your Christmas Day table smells much, much nicer than a turkey that’s having its guts removed by a strong countrywoman’s fist.  When all was done,  the blood-soaked newspapers and the bucket of gleaming giblets were removed, and the table scrubbed and the oilcloth restored.  One person with whom I’ve shared this memory has declared it’s a metaphor for our own north-eastern corner over the past forty years: a lot of blood and guts ending in an unrecognisable, hollowed-out shadow of its former self.

Our family didn’t do Christmas stockings, so I had to lie a lot at school in the weeks before Christmas – certainly I had a stocking, certainly I hung it up. In fact we used shoes, not stockings: ten polished pairs side by side on the kitchen floor. As we slept, Santy was downstairs drinking his milk and eating his biscuits before leaving our presents beside or on top of our shoes. In the morning we could look but we better not touch. First, we must make our way to  Mass in Omagh.

Or Masses. Because on Christmas Day, the priest was allowed to say not one but three Masses in a row. My father, a cattle-dealer with an eye for a bargain, stayed for all three and so did we. If you want to know what boredom is, picture a priest descending the altar steps at the end of Mass, pivoting on his heel and starting again: “Introibo ad altare Dei.” Three in all.

Finally, heavy-eyed with tedium and weak with hunger, we got home and unwrapped our presents. Santy never seemed to have left the bike or the scooter I’d asked for. Instead there’d be a tin whistle and maybe a Radio Fun Annual, which was better than nothing but poor reward for being as good as I’d been all year. The DUP probably had a similar sour feeling when Boris rewarded their loyalty with an Irish Sea border.

After what seemed like ten hours but was actually less than three, the cry went up: “Dinner’s ready!” The turkey, well-tanned and smelling amazingly good,  was divided out according to age. My father and oldest brothers got the legs and wings, my mother and sisters got bits of breast, and I got what was left.

But my plate was heavy with lashings of poundies and baked spuds and gravy and cranberry sauce and brussels sprouts, plus a huge jug of orange juice in the middle of the table to help wash it down. Followed by plum pudding with brandy butter and trifle and mince pies, until  you felt so full, you creaked when you moved.

Then my father fell asleep by the fire and my mother and sisters washed the mountain of dishes, while my brothers went for a walk and  I sat and watched ‘High Noon’ on the black-and-white TV, with Gary Cooper and a delicious Grace Kelly, and ‘Do Not Forsake Me, O My Darlin’ from Frankie Laine. That film was always shown on Christmas Day, it seemed. As was Queen Elizabeth’s message to her subjects, but my mother insisted the TV remain switched off during dinner so we always missed her wise words.

As darkness crept in, cups of tea and slabs of Christmas cake, all marzipan and icing and raisins, were served, and the box of Black Magic was passed around, followed by a tin of Quality Street for balance. Tempers then began to fray and my sisters muttered resentfully about feeling bloated, as if someone had forced them to gorge themselves.  Not wanting to be caught in the cross-fire, I would slip off to my bedroom,  to play with toys or read my Radio Fun Annual or just stare moodily out the window.

An hour earlier than usual, my father’s voice would sound throughout the house, calling that that was another Christmas got over,  it was time we said the rosary and up to our beds. For once he kept the trimmings short.

Our bodies stuffed with rich food, our souls stuffed with three-Mass piety, we fell asleep, our dreams a wild mixture of  headless, amputated turkeys, High Noon shoot-outs and guts in a bucket.