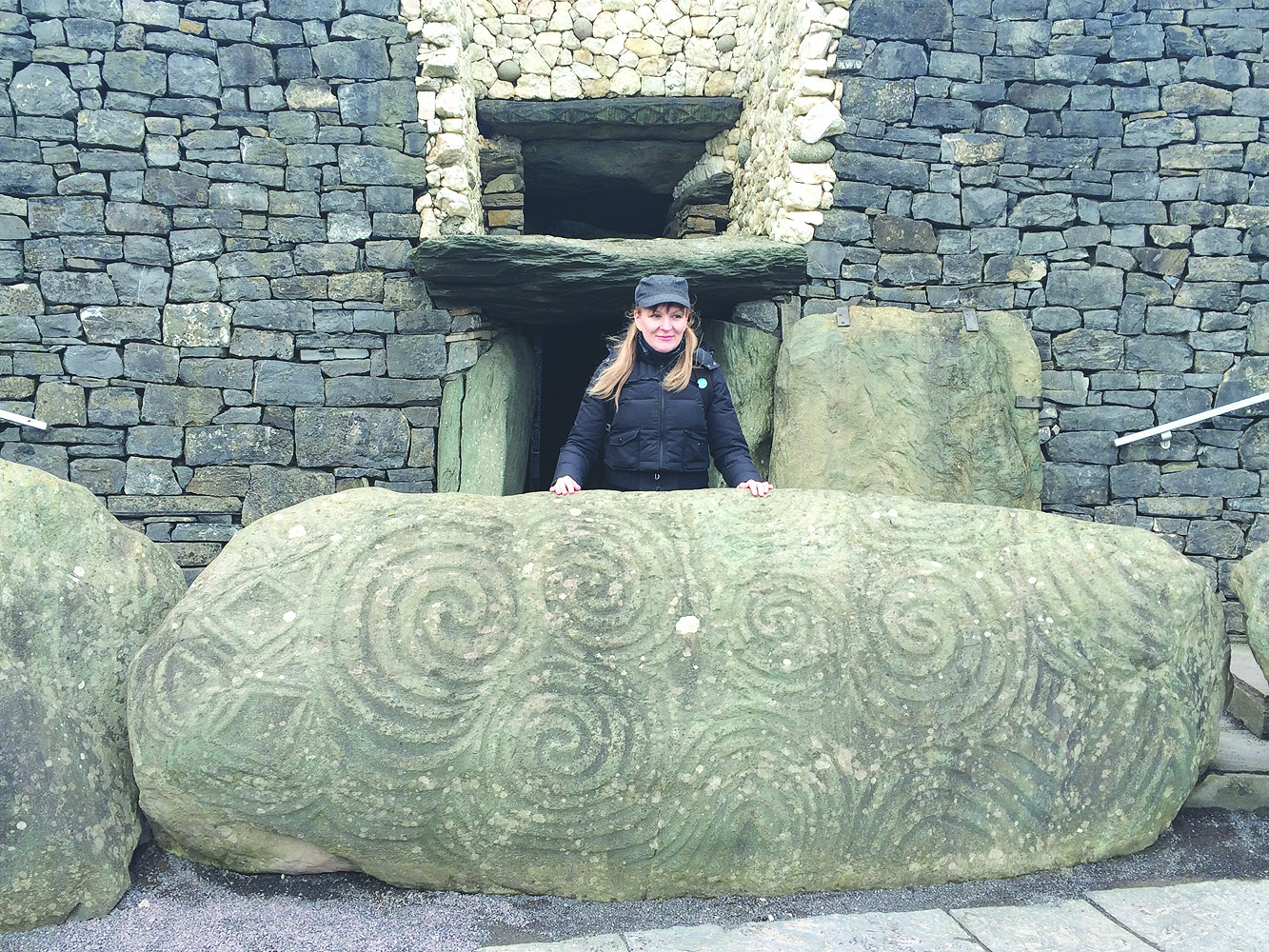 It’s a regular occurrence at the mound on the hill: the arrival of busloads of chattering schoolchildren more interested in a day off than the Neolithic monument, which has, for millennia, confounded antiquarians, unnerved locals and sparked debate.

Is it a tomb, an astronomical observatory, home of pagan gods, a passage between worlds?

For centuries, it has been viewed by locals with suspicion and fear, a monument shrouded in darkness that echoed of death, the dwelling place of the all-powerful Tuatha de Danann (later the Sí or fairies) that ruled Ireland before the coming of the Celts.

Children were warned away. Even if those who didn’t believe in the Sí knew there was something strange about Newgrange.

Today, it’s a fully restored UNESCO World Heritage Site, part of one of the most important Megalithic sites in Europe, with 200,000 visitors a year flocking to witness the secret of its light.

On this particular morning, little school buses navigate their way toward the white quartz façade that belies the darkness within.

Glinting in the rarely seen sunlight, the 5,000-year-old drum-shaped mound soon emerges over the scraggy bushes lining the small muddy roads of the Boyne Valley. The guides have seen it all before: the “dossers and dawdlers”; the contemptuous indifference of boys with smart comments at the ready; toddlers leaning into their parents, overwhelmed by the racket and the freezing wind; teenagers studying art for their Leaving Cert, disengaging from the crowd to eye up a good place to squat for the morning.

Being told to turn off their phones and not take Neolithic selfies didn't start the day on a good foot. Nevertheless, the guide launches into the remarkable tale of how the ancient Irish managed to transport – no-one knows how – these massive rocks for up to 50 miles to build a mound 40 feet high and 260 feet wide surrounded by 97 kerbstones that weigh a ton, literally. And all this 1,000 years before the Egyptian pyramids, and even Stonehenge, were built.

“Why would he do that?” the guide asks.

“He wouldn’t be bothered,” a boy shrugs.

The monument is no stranger to the indifference of the modern world. For millennia, it was lost to history, a hill of rubble overgrown with grass. In 1699, almost a hundred years after the Battle of Kinsale – an event that saw the final defeat of the Irish chieftains at the hands of the Tudors and the mass confiscation of the land for English settlers – Newgrange was accidentally rediscovered. Needing to build a wall, the new Anglo-Irish landowner, Charles Campbell, sent his workmen to gather rocks from his fields, and on discovering a narrow passageway beneath the rubble, Campbell sent for Welsh antiquarian Edward Lhwyd.

After creeping through the darkness of the 17-foot long passageway into a 20-foot high “cave” surrounded by three alcoves with carved granite bowls (“barbarous sculpture” Lhwyd called them with “bones of beasts”), the Welshman deduced it was a tomb, a theory supported by Sir Thomas Molyneaux, then “Professor of Physick in the University of Dublin”, who traipsed up to allegedly find “two bodies entire.” Newgrange was thus consigned to history as a place of death or “of sacrifice of the ancient Irish.”

Yet its construction was attributed to the Danes, Phoenicians, Egyptians, anyone it seemed except the native Irish, which incensed antiquarian George Petrie who advocated “to allow the ancient Irish the honour of erecting a work of such vast labour and grandeur.” The confusion was inevitable.

The new visitors were of Anglo-Irish rather than Gaelic heritage. To understand Newgrange was to understand the Irish imagination captured in Irish mythology, which told this was the place where “three times fifty sons of kings abode,” where the great mythical hero Cúchulainn was conceived, and where Diarmiud was brought upon his untimely death by his godfather Oengus of the Sí, so it would “put an aerial life into him so that he will talk to me every day.”

Mythology held it to be a home of the gods and a passage between worlds, but it was the artwork suggesting sun worship that tipped later antiquarians to the possibility that Newgrange wasn’t a tomb, or at least not just a tomb. George Coffee found “Rayed suns and wheel-like figures are plentiful,” and Sir William Wilde noticed a “false lintel” or roofbox over the entrance stone, “beautifully carved in spirals and volutes.” But then no-one understood the significance of Wilde’s finding.

When the discussion turns to art, the Leaving Cert students perk up. After all, this is the largest collection of Neolithic art in Europe.

“What do you think is the significance of the tri-spiral carved into the stones?” the guide asks.

“Life, death and rebirth,” ventures one.

Everyone laughs, but on second glance, the two big spirals on the top could been seen as mouse ears in a child’s world, a fact bolstered by the proto-graffiti inside that reads “Disney 1822.”

“Do you think you could draw like this?” the guide asks.

Other boys just jostle and tease him, so he won’t answer. But, 30 minutes later, as the children are led into what was to them a “hidey hole,” the boy was outside, sitting by himself, his foot in the gravel, drawing spirals with his heel. Inside, in the dark, the children line up on either side of the tight chamber as they’re told, tall ones to the back, small ones to the front, with a gap of two feet down the middle. The guide turns out the electric light to squeals and giggles, and eventually an uneasy silence. It was in this darkness that Professor Michael J. O'Kelly sat at the break of day on the winter solstice of 1967, testing modern theories of why the construct was astronomically oriented toward the rising sun; the reason a Neolithic builder had watched the sun break on the horizon on the shortest day of the year and carefully marked the ground with pegs to follow its rise and fall, then outlined a chamber and calculated the correct height for the inimitable roofbox.

In the 5,000 years since, the monument had stood misunderstood, a miracle of Neolithic engineering, a triumph of the human spirit to honour the gods, life, death, and rebirth, and a testament to Neolithic man’s commitment to something greater than himself. This morning, as it did in 1967, and in 3200BC, and for a thousand years after, a narrow ray of light pours through the roofbox, breaking the darkness, steadily advancing along the passage floor, and stretching back to illuminate the farthest alcove. The sunlight would only last only 17 minutes before retreating, and it would do this only for a few days before and after each winter solstice, to promise rebirth on the shortest day of the dark days of winter.

For the children, the stories of ancient miracles of engineering and fairies and magic and antiquarians are forgotten, if they were ever heard at all. A couple of yelps sound as two children crack heads leaning into the light. Then a little hand reaches into the sunbeam, and another and another, drawing spirals in the light.

Karen F McCarthy, a Dublin native and New York-based author and journalist, is the author of ‘The Other Irish’, an account of Ulster Irish settling of the early American frontier.