GERRY ADAMS: Afghanistan tragedy a familiar one to students of imperial history 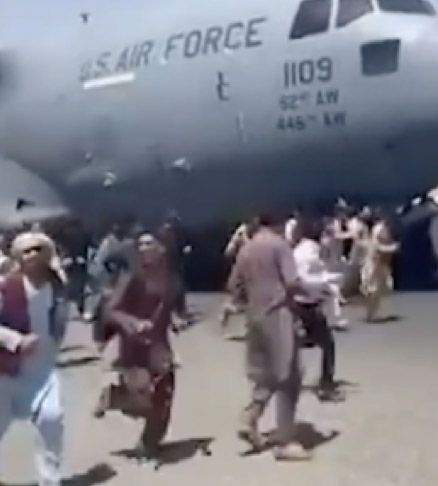 PULL-OUT: Chaos at Kabul Airport as the US flees Afghanistan

ALMOST exactly 20 years ago, the USA and Britain invaded Afghanistan. On Monday past the Taliban returned to Kabul amid scenes of chaos as thousands tried to flee. The British pulled their Army out of Afghanistan in 2014 after losing 457 soldiers and spending some £37 billion there. This week, like the fall of Saigon in another era, they are pulling out their citizens and Embassy staff.

The future for the people of Afghanistan is less certain. But a look at the Iraqi situation gives a sense of the stupidity of these adventures.

Like the decision to go to war in Iraq the human consequences of the political/military strategy of western states in that region have proven to be catastrophic. Hundreds of thousands have died, millions have been displaced, and the political and economic instability created by the western wars in Iraq and Afghanistan have been disastrous.

Under the grand title of ‘Operation Enduring Freedom’ British and US forces invaded Afghanistan in October 2001. Sinn Féin spoke out against the decision. While we opposed the policies of the Taliban government we were convinced that a military invasion would only make a bad situation worse.

The following year, in the course of Sinn Féin’s negotiations with British Prime Minister Tony Blair, both Martin McGuinness and I repeatedly raised with him the intense speculation then circulating about a possible invasion of Iraq by British forces.  We reminded Mr Blair that British military adventures overseas never end well, but especially for the people who have been the target of the invasion. Military occupation always leads to confrontation with local communities and the imposition of special powers to maintain control. We pointed to the decades of conflict in Ireland following British soldiers coming back on to our streets in 1969 as evidence of this.

During that first occasion in Blair’s office in Downing Street, we very bluntly told him and Jonathan Powell, his Chief of Staff, that invading Iraq would be disastrous for Britain and especially for the people of Iraq. We put this to him again on a number of subsequent occasions. To be frank, both Martin and I were convinced, even before a public decision to invade was announced, that Mr. Blair was already committed to invasion.

Tens of thousands have fled their homes in Afghanistan, here are 5 facts you should know about the humanitarian emergency in the country. pic.twitter.com/B2b5OH5WwU

With military forces in both Afghanistan and Iraq the techniques of occupation, of interrogation and torture, of population control and manipulation of the media, which had been used extensively in the North of Ireland, all came to the fore. The handling of the media was particularly crucial in covering up or distracting from the killing of civilians and the many accusations of torture.

The publication by WikiLeaks of 90,000 US military files in July 2010 revealed the depth to which these techniques were used in Afghanistan between 2004 and 2009. The WikiLeaks documents provided evidence of previously unreported actions in which Afghan civilians were killed or wounded. In 144 incidents detailed, almost 200 civilians were killed and hundreds more injured. This was almost certainly a serious underestimation of the true scale of civilian casualties.

Human Rights Watch, which reported on the war in the North of Ireland, said at that time: “These files bring to light what’s been a consistent trend by US and NATO forces: the concealment of civilian deaths.”  The files also revealed the existence of Taskforce 373 – a covert operations unit whose task is to ‘remove’ the enemy. All of this was evidence of another dirty war using old strategies and techniques, and once again failing.

When asked if the publication of the battlefield and intelligence documents by WikiLeaks would make a difference, the then British Foreign Secretary William Hague, said: “None.”

Six years later, in June 2016, the Chilcot Report into the Iraq War was published. Chilcot accused Tony Blair of invading Iraq before all “peaceful options for disarmament had been exhausted. Military action at that time was not a last resort.” What also emerged from Chilcot’s two and a half million words is evidence of a British government that had not prepared its military for the invasion. It had no long-term political strategy. It didn’t even have the right military equipment essential to an invasion.

Afghanistan and Iraq are examples of western powers thinking they still have the right to do what they like, when they like and against whomever they like. Their national interests, however short-term, are all that matters. The end result is chaos and calamity for the peoples they invade.

The stupidity and incompetence of the British political, military and bureaucratic establishment, which fought a war in this part of Ireland for almost 30 years, is underlined by the nonsense claim of Colonel Richard Kemp in 2010. Kemp worked to the British Cabinet between 2001 and 2006 during which time he was a senior strategist and commander in Afghanistan. In the summer of 2010 he claimed that the British Army won the war in Ireland. Writing in the Guardian newspaper in August 2010 I said: “If Kemp could get it so wrong in our country, why should anyone expect him to get it right in Afghanistan? And if he and William Hague are reflective of British thinking today, then the British are destined to make the same mistakes in that part of the world they made here.”

Almost exactly 20 years after the invasion of Afghanistan in October 2001 and my prediction in 2010, it would appear that successive British governments opted to make the same mistakes. The thing about the lessons of history is that imperial governments rarely learn thm – instead they ignore them.

RECENTLY my column focused on the British Labour Party and the approach of its current leader Keir Starmer toward Ireland. The internal decision-making processes of that party and the leadership style of Mr Starmer are obviously a matter for it and for him. My concern is for its Irish policy and in particular the Labour leader’s stated willingness to stand on the side of Unionists in any debate on Irish unity.

His stance is in direct contradiction to the principles of the Good Friday Agreement which state that it is for the people the island of Ireland alone to determine our own future. Regrettably, the news that Ken Loach, film producer, director and writer, has been expelled from the Labour Party has reinforced my concerns.

'Starmer and his clique will never lead a party of the people. We are many, they are few. Solidarity.' KL

Ken Loach has long been a friend of Ireland. The 85-year-old is widely respected, with an impressive international reputation as a filmmaker. His style of filmingmaking is described as “socially critical” and he makes no secret of his belief in socialism. His films have tackled issues of poverty and homelessness (Kathy Come Home), of workers’  rights, the Spanish Civil War and the power of the state against the unemployed. The first episode of his powerful 1974 television series Days of Hope showed British soldiers in Ireland during the Tan War and in one memorable scene Tríona Ní Dhomhnaill sings The Bold Fenian Men to British soldiers who have taken over her family farm.

Loach’s 1990 film Hidden Agenda tackled the issue of shoot-to-kill and Britain’s dirty war in Ireland and The Wind that Shakes the Barley, about the Irish Civil War, and I, Daniel Blake both won the Palme d'Or at the Cannes Film Festival, making him one of only nine filmmakers to win the award twice.

And now he has been expelled from the Labour Party. Loach has reportedly said that his expulsion is because he would “not disown those already expelled”. The move follows closely on reports that Keir Starmer is preparing a purge of members supportive of Jeremy Corbyn.

Whatever the truth of this, Ken Loach is someone who has stood up for the downtrodden all of his life. His expulsion is a significant loss to the British Labour movement.

WELL done Féile an Phobail and of the staff who plan and prepare Féile. Many thanks to all those volunteers who work around the clock every August to make it all come together. This was Féile’s 33rd year and despite the pandemic and all of the restrictions, Féile an Phobail was another wonderful August extravaganza.

The Fight Night was extraordinary and from earlier that day there was a buzz on the road. The 80s music night and the Wolfe Tones concert were amazing. Well done to the Wolfe Tones who gave a shout out to the efforts of the Moore Street Preservation Trust to preserve and protect the historic 1916 battlefield site. This is a hugely important campaign that deserves the support of everyone. The free night for young people – the Féile Dance Night – was absolutely super.

The hybrid model of real gigs, limited quite rightly in size, being streamed or zoomed across social media, is a mark of the ingenuity, creativity and sheer expertise of the Féile team. And of the living, loving, singing,dancing, acting-the-eejit, generous, outward-looking. artistic community which Féile represents.

Thanks also to Féile for hosting the launch of my latest book, Black Mountain And Other Stories. Harry Connolly, Féile Chair, was very kind and Timothy O-Grady travelled from Poland to be with us. He too was very kind. He also did the foreword to Black Mountain. Thanks to them all, and to the Felons who hosted the event.

The following Saturday I was in Derry for another book launch as part of the Gas Yard Féile. Thanks for the invite and to all of those who came along to listen to me read extracts from my books and to ask me some questions. Both launches were very enjoyable. So too was Scribes at the Rock where I joined Seamus Carabine and Tadhg Hickey. Their contributions were much funnier than mine. But I enjoyed reading again from my book. Thank you one and all.