Antrim drawn against Dublin on their return to Liam MacCarthy Cup 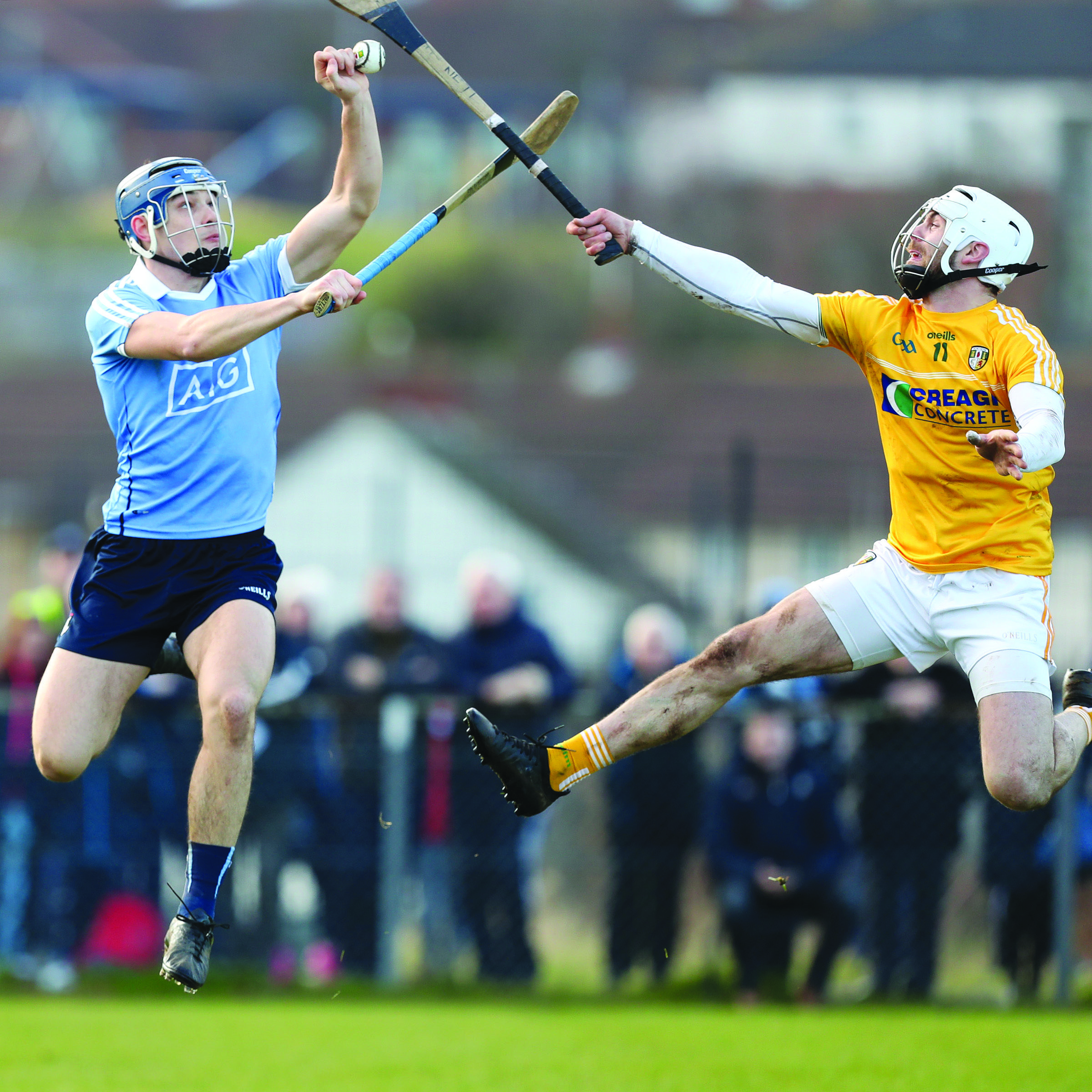 Antrim’s Neill McManus and Dublin’s Eoghan O’Donnell (above left) fight for possession during the last competitive meeting between the sides at Corrigan Park in 2018 and they’ll clash again in the quarter-final of the Leinster SHC later in the year.

ANTRIM senior hurlers have been pitted against Dublin on their return to the Liam MacCarthy Cup while the Saffron footballers face a difficult trip to Armagh in the Ulster SFC following Tuesday’s Championship draws.

The various provincial draws took place across Monday and Tuesday with the Leinster Senior Hurling Championship draw taking place on Tuesday morning before the draw for the Ulster SFC.

Antrim last competed in the Leinster SHC back in 2015 when they finished bottom of the Qualifier group and were subsequently relegated to the Christy Ring Cup (the-then second tier).

Last year, under the guidance of Darren Gleeson, Antrim regained senior status by virtue of winning the Joe McDonagh Cup thanks to a 0-22 to 1-17 win over Kerry in Croke Park.

In terms of their Championship opposition, Dublin weren’t the toughest or the easiest team Antrim could have faced in the quarter-finals.  They would have preferred Laois, but will be relieved to have avoided Davy Fitzgerald’s Wexford with those two counties meeting in the second semi-final.

Antrim suffered a last-gasp league defeat to Dublin in Corrigan Park back in 2018 before suffering relegation from Division One.

The winners of Antrim versus Dublin will progress to face Galway in the Leinster SHC semi-final with Kilkenny awaiting either Wexford or Laois.  The quarter-final losers will then go into a preliminary round Qualifier tie which will double up as a relegation play-off.

Gleeson’s men will be hoping to retain their Division One status following their promotion from Division 2A last season.

The Allianz Hurling League is scheduled to begin on the weekend of May 8-9. While the full list of fixtures isn’t known, it is understood that Antrim will begin their Division 1B with a home fixture against Munster side Clare.

The three-time Tyrone All-Ireland winner had many battles with the Orchard County over a distinguished inter-county career and he’ll be hoping he can lead Antrim to a long-overdue win in the Ulster SFC.

The Saffrons are without a victory in the provincial series since 2014’s quarter-final success over Fermanagh in Brewster Park.  Last season, Antrim lost out to eventual Ulster champions Cavan in the quarter-final last November in Kingspan Breffni Park.  The game marked the end of Lenny Harbinson’s three-year tenure as Antrim senior football manager with McGinley taking over.

While Championship meetings between Antrim and Antrim have been few and far between in recent times (they last met in the Ulster semi-final of 1982), the last league meeting between the sides was a tempestuous affair back in 2017.

CJ McGourty’s penalty miss proved costly as the Saffrons went down to a narrow 1-12 to 0-13 loss in the Athletic Grounds and they suffered relegation from Division Three following their subsequent draw at home to Longford.

The game also led to a controversial 48-week ban for former Antrim star Matthew Fitzpatrick, although the St John’s clubman had his suspension overturned on appeal.

With the Orchard County now up into Division One, they’ll be seen as strong favourites to progress to the semi-finals with the winner of Armagh and Antrim facing either Monaghan or Fermanagh in the last four.

The draw for the 2021 Ulster Senior Football Championship! 🏆🏐#Ulster2021 pic.twitter.com/CdKYy6rW1m

On the other side of the draw, Down host Donegal in the preliminary round with the winners taking on Derry in the quarter-final.  The last quarter-final sees new Tyrone managers Feargal Logan and Brian Dooher host defending Ulster champions Cavan in Healy Park.

The opening round of games are scheduled for the weekend of June 26 with the Ulster final set to take place on Saturday, July 31 or Sunday, August 1.

As was the case in 2020, the 2021 football Championship will be a straight knock-out with the Tier 2 Tailteann Cup shelved for another year.