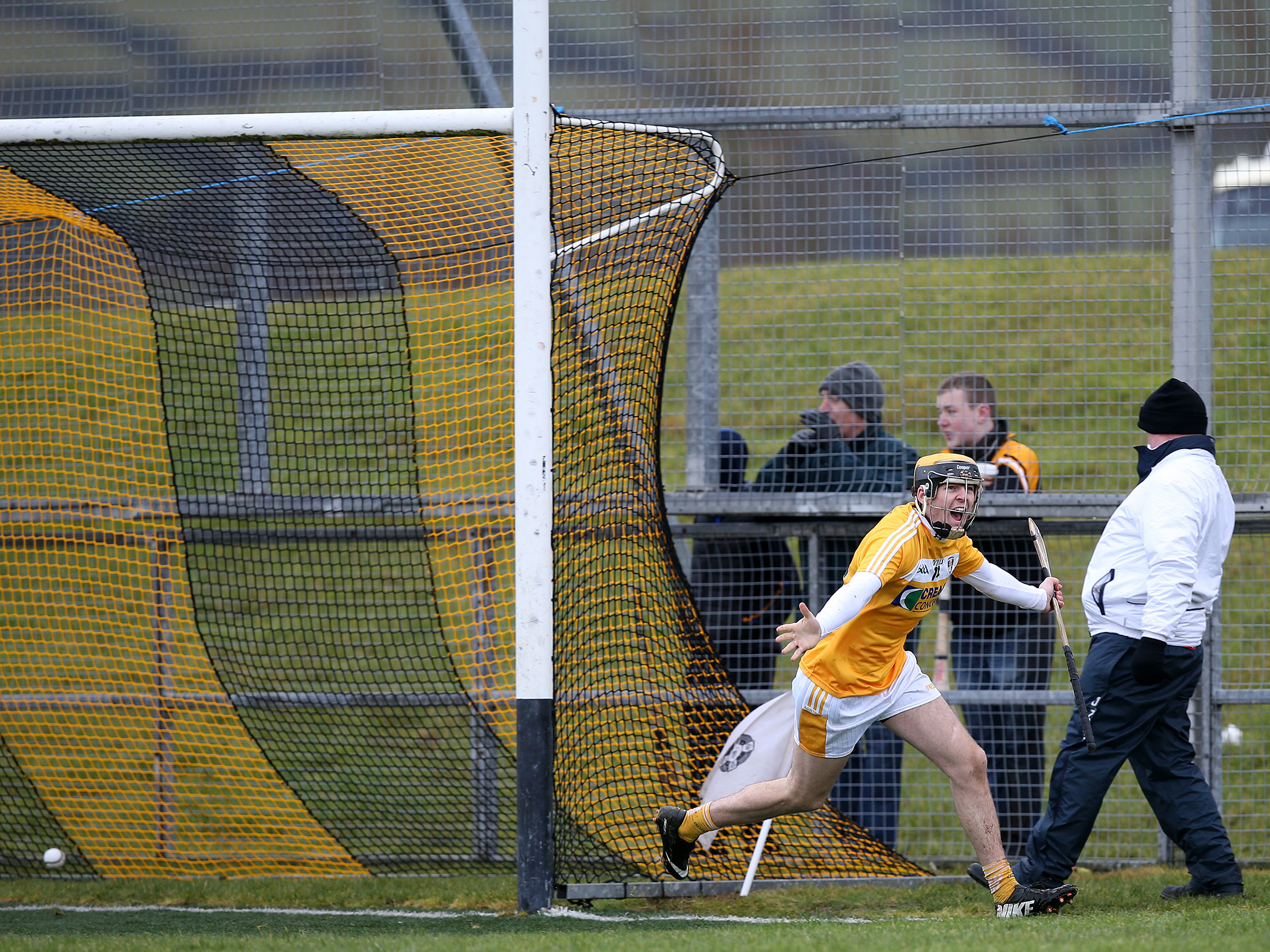 Antrim's Saul McCaughan wheels away to celebrate after the second of his two goals against Kildare Pic by John McIwaine, Press Eye

DAVID Mohan in Ballycastle writes: Antrim hurlers claimed their second win in as many games at Ballycastle on Sunday when PJ O’Mullan’s men produced a mixed performance to defeat Kildare.

The Saffrons hit an impressive 3-25 with the full-forward line of Conor Johnston, Saul McCaughan and Ciaran Clarke contributing 3-13 of this total, but in defence they looked shaky and conceded three preventable goals – something they’ll need to work on going forward.

After the early exchanges, Antrim made use of the wind advantage with the impressive Kevin McKernan opening their account before McCaughan and Clarke (two) got in on the act.

Kildare were certainly not here to make up the numbers and their star man, Gerry Keegan, got them on the board before Philip Cocoman intercepted the subsequent puck-out to split the posts.

Conor Johnston and Martin Fitzgerald traded scores before the visitors hit the first goal of the game when a mistake from Conor McKinley allowed Jack Sheridan the opportunity to gather, race in on goal and finish to the net to give Kildare a 1-3 to 0-5 lead on 13 minutes.

Antrim were soon back in front, however, as McKernan hit a couple of points and, while Niall Ó Muineacháin levelled soon after, when Eddie McCloskey restored the advantage for the home side, they were to hold this lead until the final whistle.

Antrim hit something of a purple patch after that McCloskey score, going on a run of 1-7, the goal coming on 23 minutes when McCaughan produced a delightful flick to make space before burying it in the net.

By the time Kildare added to their tally with a Fitzgerald free on 29 minutes, they trailed by nine and this remained the gap at the half with Antrim leading by 1-15 to 1-6.

Antrim continued to push on after the break with Niall McKenna hitting a couple of scores and Ciaran Clarke also pointing, but Kildare continued to battle and they were rewarded on 47 minutes when Ó Muineacháin went on a powerful run and passed to Sheridan, who cracked home his second goal of the day.

McKenna hit back with a point immediately and on 50 minutes McCaughan rose superbly to fetch McKenna's dropping shot and fire into the net.

However, Kildare cancelled this goal out straight away as a long and seemingly harmless ball was missed by Gabriel McTaggart in the Antrim goal and Gerry Keegan nipped in to whip the ball home.

Keegan then hit a point to trim the gap back to nine, but any notions of an unlikely comeback were put to bed on 55 minutes when Ciaran Clarke hit Antrim's goal after a run in from the left.

The sides were to hit four scores apiece in the closing stages, but the result was settled well before the end as Antrim collected another two points to leave them level with Westmeath at the top of the 2A table ahead of their trip to Mullingar in two weeks time.