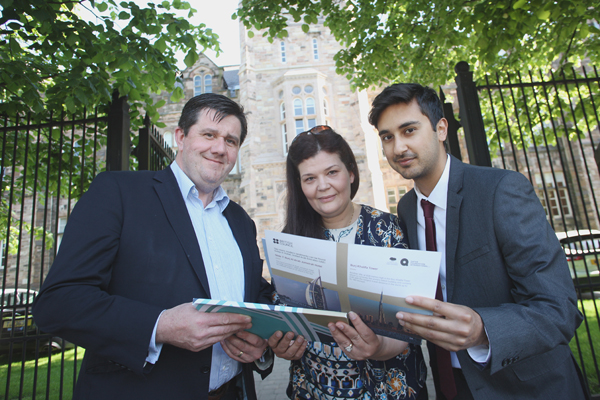 STUDENTS from a North Belfast school are being taught Arabic in preparation for a possible career in business.
At a conference, held at Belfast Royal Academy on Wednesday morning, an audience was told of the importance of the Arabic language for business opportunities.

Pupils at BRA have been offered the opportunity to learn the language as well as Arabic culture and art for the last two years.
Speaking at the event, Paul Porter, Head of Modern Languages at the school, said that the promotion of Arabic as a language was important in the local community and for the future.

“We’re trying to promote Arabic as a language in our local community, especially for the promotion of jobs,” he said. “It’s almost forward thinking in a way, teaching Arabic in preparation for the future. We are into our second year of teaching Arabic and the school is heavily involved in helping people from other schools in Northern Ireland to teach and promote the language.
“The students are enjoying it as it’s something very different. There has been a lot of negative publicity with Arabic in the media with the language synonymous with a negative viewpoint in the world. We are not about that and we believe the language, art and culture is not confined to negative views and I believe Arabic will be hugely positive in years to come.”

A recent report by the European Commission underlined the importance of new and diverse language learning and ranked Arabic in second place of the most important languages for business over the next 15 years after Spanish and before French and Chinese.
Rym Akhonzada, from Interlingua School of Languages, said: “This conference is to highlight the importance of the Arabic language and to start encouraging schools to offer Arabic as a language for both primary and post-primary.
“Arabic is spoken by 300 million people in 22 countries and is the fourth most spoken language in the world.

“There are benefits for diversity and business in particular, with many Northern Ireland businesses exporting to the Middle East,” he said.
Belfast Royal Academy is leading the way in its teaching of Arabic with a number of other schools going in the same direction including Methodist College, Victoria College and St Malachy’s College involved in the Arabic initiative.