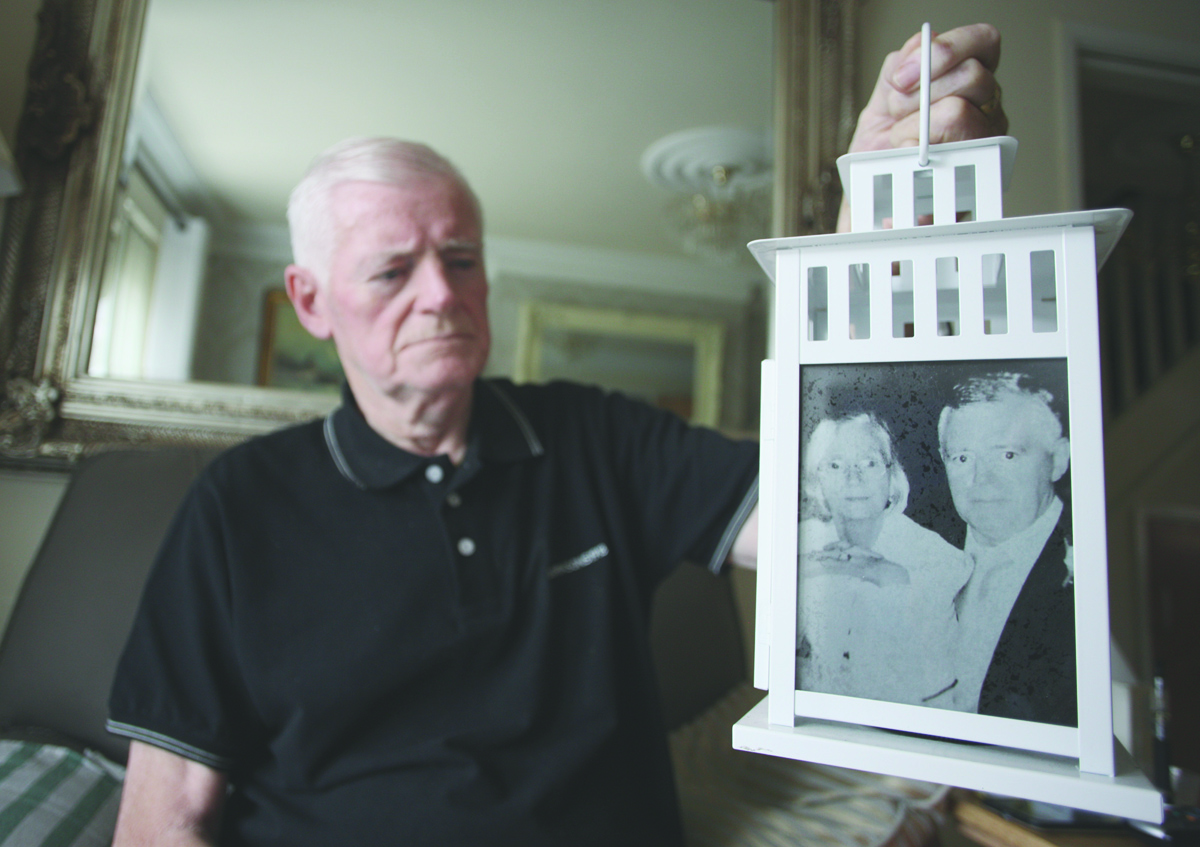 CLAIM: Daniel Howard Mulcahy looking at a photo of himself and his late wife Patricia

A CARRICK HILL resident is calling for an inquiry into a link between deaths of local people from exposure to deadly asbestos over the years in the area.
Daniel Howard Mulcahy has lived in Carrick Hill for over 50 years and believes there is a strong link between the ‘silent killer’ disease and a large number of cancer-related deaths in Carrick Hill.
Exposure to asbestos can lead to a number of serious illnesses including asbestosis and lung and breast cancers.
The 79-year-old, who lost his wife Patricia last year and brother-in-law three years earlier to cancer, says residents in Carrick Hill are paying the price for a lack of health and safety around asbestos.
“I used to live in one of the old three-bedroom houses in Stanhope Street before moving to one of the houses facing the flats.
“After a few years, they decided to build new houses and demolish the existing dwellings. This is where the danger lay because not one resident was informed that this dangerous asbestos was waiting to be unleashed on the people of the estate.
“There was asbestos on the porch and under the windows. People should not have been living there.
“We were never told as residents about the risk of asbestos. We just lived through it. I think part of the problem lies with a lack of knowledge about asbestos.
“My wife died last year from cancer which spread all over her lungs and other parts of her body. I nursed her until she stopped breathing and then watched her die. Her younger brother died three years earlier.”
Daniel Howard believes there is a strong link between asbestos exposure in Carrick Hill and a large number of young deaths.
“Too many people in Carrick Hill have died in there 40s and 50s with cancers. I don’t think it was by chance,” he added.
“I put it down to this deadly disease because once asbestos is interrupted, the dust enters your lungs and lies dormant for years then raises its ugly head to kill.
“One morning recently, my daughter was getting her two kids ready in her flat for school when there was a knock on the door from two men covered head to toe in white suits.
“She was informed they were there to remove a panel under her window as there was asbestos.
“A friend of mine in his 50s died last week from cancer. He lived in Carrick Hill all his life and is just the latest person to fall victim to this deadly disease. It is just too many deaths in such a small estate.
“I believe the residents of Carrick Hill should demand an inquiry into why so many of their loved ones had to die such a horrible death which could have been avoided.”