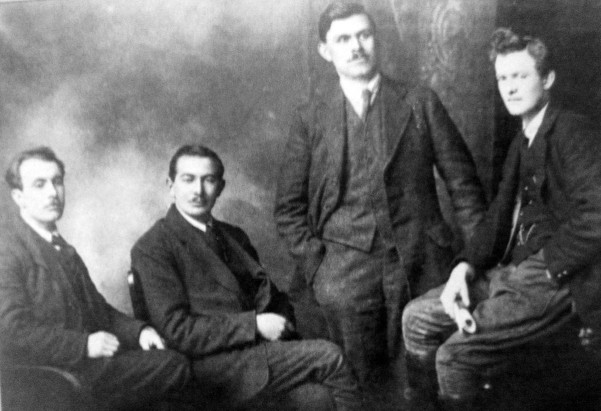 COMRADES IN ARMS : Seamus Robinson, Sean Treacy, Dan Breen and Michael Brennan all gained fame in the fight for Irish freedom - but some more than others

On Easter Saturday 1916 the Belfast Volunteers travelled to Coalisland to link up with the Tyrone contingent. Daniel Braniff, a native of Dromara now domiciled in Belfast, expected to travel to Coalisland on the Saturday. However, he received orders from Denis McCullough to stay in Belfast. Braniff had spent several years in Scotland actively working to recruit for the republican cause – he was the Scottish representative on the Supreme Council of the IRB for two years – before being advised to leave the country in February 1916 as he was under observation from detectives. McCullough instructed Braniff to meet the boat from Ardrossan when it docked in Belfast and to bring the Scottish contingent to the railway station where they would proceed to Portadown. He had a number of rail tickets which had been purchased earlier in the week by the Connolly sisters. In the event nobody came off the boat because the Scottish Volunteers, now bereft of leadership, decided to go directly to Dublin. Earlier in the year, the leadership of the Fianna in Dublin requested that their Glasgow counterparts should send a group of Volunteers to Dublin for further training. The night before a group set off for Dublin earlier in the year the two top men, Joe Robinson from Belfast and Seamus Reader, were arrested and held in prison in Glasgow before being sent in May to Reading Gaol to join those sent there from Dublin after the Easter Rising. Among them were Joe’s brother Seamus, Arthur Griffith, Herbert Moore-Pim, Cathal O’Shannon and Eamonn Ó Duibhir from Tipperary.

Among those who travelled in January from Glasgow to Dublin was Seamus Robinson who would serve with distinction during the Easter Rising. The Scottish group joined others from Manchester, Liverpool and London at Kimmage and for the next two months they made ammunition, grenades, pikes etcetera using materials which they had sent over for the Dublin Brigade. On Easter Monday morning George Plunkett put Robinson in charge of a section of men. As he marched towards the GPO he was handed an order signed by James Connolly telling him to take over Hopkins & Hopkins, a burglar-proof jewellers shop at O’Connell Bridge. Robinson and his men held their position until Thursday, the last outpost, when they crossed over to the GPO. He was in action in Moore Street on the Saturday when the rebels surrendered. He was brought to Richmond Barracks and a week later shipped to England, ending up in Reading Gaol.

Eamonn Ó Duibhir was head of the Volunteers in South Tipperary. He attempted to reach Dublin on Easter Monday but was arrested. He and Seamus Robinson became firm friends in Reading Gaol. Under Ginger O’Connell, a former colonel in the US army, they studied military techniques. Ó Duibhir recognised that Robinson had great potential. He invited him to go to Tipperary when they were released. In December 1916 Ó Duibhir headed home to a hero’s welcome and he announced that he had invited Robinson to reorganise the Volunteers. Robinson arrived and gave a lecture on his exploits in Dublin during Easter Week 1916. Arrested for drilling in April 1918, he and Ó Duibhir were sentenced to six months in prison. They were brought to Crumlin Road Gaol and under the command of Austin Stack they smashed up their wing. Released in October 1918, Robinson was elected Brigade O/C; Sean Treacy Vice Commandant; Maurice Crowe Adjutant; and Dan Breen Quartermaster. By this time the Brigade had acquired a moderate supply of arms. Robinson was keen to have some action before the first Dáil was to meet on January 19, 1919.

He wrote: “My mind was occupied with these thoughts when, during the Christmas of 1918, Sean Treacy, my Vice O/C, came to O’Dwyer’s. Treacy informed me that some gelignite was soon to be taken to a quarry near Tipperary town. He was not sure of the exact date and added that anything from two to six police would be guarding it. He wanted to know should we capture it.”
Robinson assured Treacy that there was no need to inform GHQ in Dublin as it might take weeks for a reply to come through. He stated that he would take full responsibility as long as he was present in the ambush. The ambush at Soloheadbeg took place on the day that the Dáil first met. There had been other shootings and raids before but there had never been a follow-through. There was outrage among the establishment since two RIC constables were shot dead. One of the participants in the raid, Sean Hogan, was arrested shortly afterwards at a dance. Robinson, Treacy and Breen organised his rescue at Knocklong railway station during which Sean Treacy was wounded in the neck while Dan Breen was shot through a lung. He received the last rites but pulled through. After Knocklong, Robinson, Treacy, Breen and Hogan relocated to Dublin where they participated with Dublin Volunteers in a number of attacks. Robinson returned to Tipperary at the end of 1919 to resume his role. He established the first flying columns. In 1921, Robinson was elected to Dáil Éireann as a Sinn Féin TD for Waterford-Tipperary East. He opposed the Treaty. When the Civil War broke out Robinson took the anti-Treaty side.

In 1928 Robinson was elected to Seanad Éireann as a Fianna Fáil Senator. In 1947 he was appointed one of the five founder members of the Bureau of Military History which logged the history of the independence movement 1913-21. Robinson died on December 8, 1961.

Attempts have been made to airbrush Robinson from history. Not being a native of Tipperary his name doesn’t feature in ballads. In 1924 Talbot Press published My Fight for Irish Freedom by Dan Breen. Breen portrays himself as the elected commandant and claims he was present during most of the major incidents. No-one took much notice of the book but it caught the imagination when republished in 1950 and serialised by the Sunday Press. It has now been established that Breen was recuperating in Dublin for long periods when he claimed to be on active service. In fact, he didn’t write the book. It was written by Mrs Seamus O’Doherty.

In a letter to the Sunday Press (unpublished through ‘lack of space’) Kathleen Keating, whose Dublin home had been a safe house for Tipperary men from 1916 to 1922 (Sean Treacy left there on the morning he was shot in Talbot Street), wrote: “I have said that the Volunteers of Scotland and of Dublin have not forgotten Séumas Robinson. But the men of South Tipperary seem to have forgotten him, or, what is worse, ignored him. Why? Surely it could not be because Séumas Robinson hails from the same part of Ireland as Seán an Daoimhis, Roger Casement, Jemmy Hope, Henry Joy McCracken, Willie Orr, General Monroe, Betsy Gray, Joe McKelvey and many others. Tipperary men are ashamed to acknowledge Séumas Robinson as the man solely responsible for starting ‘the racket’ at Soloheadbeg and leading South Tipperary all through the long fighting, that Séumas Robinson was the originating and directing brain behind the fight in South Tipperary.”

Belfast should be proud of him.