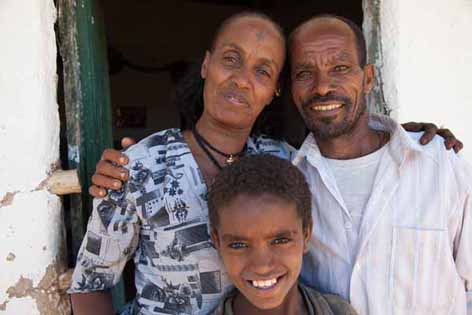 Readers will have read throughout Lent about the problems facing a huge amount of people in Ethiopia. With most of the 90 million population relying on rain-fed crops to feed themselves and their families, the effects of climate change on the weather is having a devastating impact on their ability to cope.

Because of the generosity of people here at home, Trócaire has been able to support many thousands of people in the face of these challenges in two very tangible ways.

Firstly there is the support for farmers that will enable them to grow food despite a lack of rainfall. This can be through the provision of irrigation systems which mean when the rains don’t fall people can still grow food through the supply of drought-resistant seeds that are much hardier than normal.

I saw several irrigation projects when I was in Ethiopia. Just a few miles from the community that features on the Trócaire box and which is suffering from increased drought, I visited the village of Ruwaksa. This remote settlement of 3,000 people tucked away in the Ethiopian highlands was facing exactly the same problems from a lack of rainfall.

Then in 2010 Trócaire funded the construction of a 2km-long irrigation channel from a spring in the mountains. The villagers invested their time and labour to complete the project and the scheme is now directly helping 1,500 people. The valley is now like the Garden of Eden. One of the farmers, Berhe Hailu, and his wife Mulu, told me that their lives have been transformed.

“The irrigation scheme means we are not totally dependent on the weather,” Berhe told me. “We are able to use land that was never used before and we can harvest two or three times a year. We have also received training, tools, seeds, fruit tree saplings – we never had any of these things before.”

Mulu said that previously they were only able to grow hops used in brewing. “Now look – all of the fruit trees, vegetable gardens and coffee are new. We are growing bananas, avocados, coffee, apples, limes, oranges, lettuce, cabbage, onions, garlic and tomatoes. We are eating a lot better and now we are able to sell our excess produce and can afford to provide an education and other things for our children.”

The second form of support that Trócaire provides enables people to become less dependent on the land for their survival. I saw many different types of projects when I was in Ethiopia, from bee-keeping to weaving, breeding goats to keeping chickens.

I met a lady called Mihret Atsebeha in the town of Sebeya. Mihret and her three children used to live over the border in Eritrea. Thirteen years ago during the war between Eritrea and Ethiopia, they had to flee from their home because of the fighting. They were on their own and she hasn’t seen her husband since – she doesn’t know if he is alive or dead. They came to Ethiopia with absolutely nothing.

For years Mihret worked on various government schemes just to feed her family. These ‘food for work’ schemes saw her toiling on construction projects for just 45kg of wheat a month. She said it was the only way she could feed her children.

Two years ago, Mihret was selected by community leaders to become involved in a Trócaire-supported project. She was given a small loan of 5000 birr (£170) and she used this to open a small shop in the main town square. She sells spices like fenugreek and cumin, as well as vegetables and household items. She also sells at a stall in the market on a Saturday.

This incredibly hard-working woman has managed to already pay back the first of three instalments on her loan, has used profits from the shop to buy sheep and chickens which she breeds and sells and has even managed to build a small house for her family.

Mihret told me: “If we had not been helped I think we would be dead. We are very happy now. Life is very different from before. The children are at school and I hope they will be able to go to university. If they don’t then I will help them open their own shops.”

Mihret’s story is proof indeed that a hand-up really is much more effective than a hand-out. My trip to Ethiopia showed me how important the donations to Trócaire are and how even a small amount of money can make a life-changing difference in some of the world’s poorest countries. The people of Belfast can be very proud of the work they have supported in the past and which they will, I have no doubt, support in the future.

This Lent, the UK government will match, pound for pound, donations made by the public in Northern Ireland to Trócaire’s Lenten campaign so that thousands more families can be supported. To find out more log on to trocaire.org/lent or call 0800 912 1200 to make a donation.