Belfast’s peace walls could be brought tumbling down within hours, says expert on city living 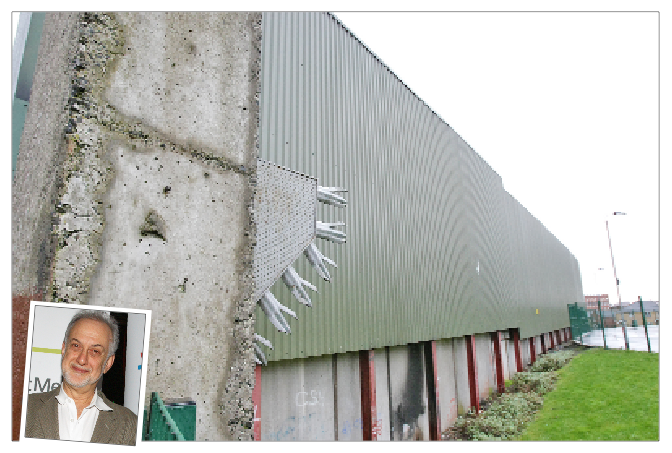 One of the world's leading urbanists has said Belfast's peace walls could be erased "in an afternoon".

Addressing the New York launch of 'Belfast: Toward a City Without Walls' by Vicky Cosstick,  the first-ever book on the steel and concrete barriers that criss-cross Belfast, Professor Michael Sorkin cautioned their removal would require "both wisdom and generosity".

But he says the walls are taking on a new purpose in the city as it moves from conflict to peace.

"I’ve spent a lot of time in cities and territories divided by walls – Jerusalem, Nicosia, Gaza, Berlin, the U.S./Mexican border, the Korean DMZ – and all have assimilated the apparatus of division into their local economies one way or another," he said. "During my trip to Belfast, the walls and sectarian murals had long since begun to morph from forms of hostility and aggression into sites of attraction, into destinations.  Indeed, our Taxitrax tour – conducted by a rich-brogued veteran – was surely a highlight of our stay. This is not to trivialise this style of merging observation and consumption, rather to assert that objects are always mnemonic and that, as memories change, so does the meaning of the things that hold and fix them.  The 'peace' walls of Belfast were always seen differently by those who built them and those who confronted them and now they can only be seen more differently still.  How then to assimilate them to the city of today, the city of tomorrow? What is to be the appearance of a well-healed wound? The surgeon presumably prefers invisibility but the patient, the object of suffering and suture, may want the scar, the emblem of pain and sacrifice."

While wishing for the speedy demolition of the 'peace lines', Professor Sorkin accepts change will be slow.

"The idea of setting a date nearly a decade hence – 2023 in the 2013 promise of First Ministers Peter Robinson and Martin McGuinness – for the final disappearance of the walls seems, and well beyond first blush, dilatory, even perverse. Why not eliminate them tomorrow? That would certainly be my wish but a big constituency in Belfast prefers otherwise, and the idea of the walls as a slowly disappearing phenomenon might well reflect a needed style of healing and an acknowledgement of the fact that the memory of the Troubles is still plastic, still fixing itself for the generation that lived through them and still contested as a legacy for those to come."

He added: "Belfast’s walls must never become invisible but must still disappear. How and when this paradox will be solved is not clear but I, for one, believe the sooner the better. Their physical erasure could be accomplished in an afternoon. But I also know that their demise will require both wisdom and generosity. Vicky Cosstick’s superb book exemplifies both."

Belfast: Toward a City Without Walls by Vicky Cosstick will receive its Belfast launch tonight at 6:30pm in the Red Barn Gallery, Rosemary Street.