BOOKS: Searching for a place for Protestants in our unsettled land 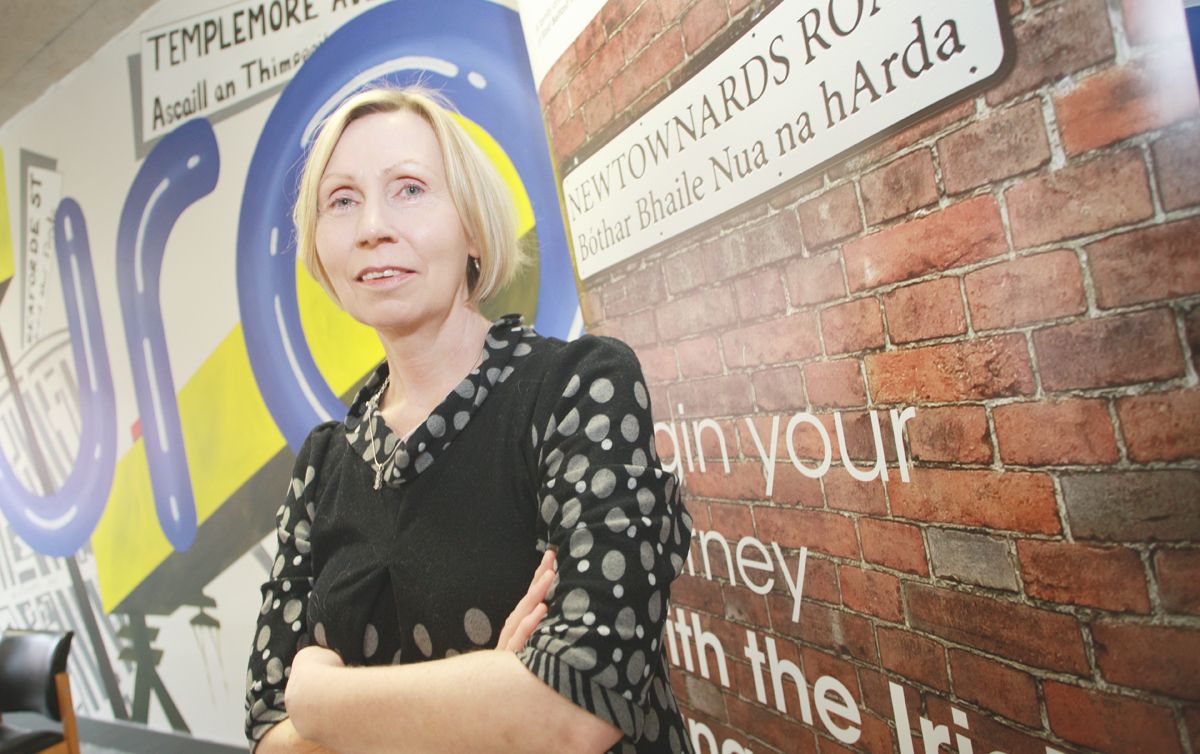 OTHER VOICES: Linda Ervine of the groundbreaking Turas Irish language Project on the Newtownards Road is among the unionists interviewed by Susan McKay.

Susan McKay is no stranger to trauma. Growing up in Derry as the Troubles broke out, she later became a founder member of the Belfast Rape Crisis Centre. A social affairs journalist for over 30 years, she understands the pain and grief inflicted by the North’s long conflict, as demonstrated most notably her 2008 book 'Bear in Mind These Dead'.

Her insight and empathy is put to good use in her latest work 'Northern Protestants: On Shifting Ground'. In the course of almost 100 interviews, McKay brings together a rich mix of ages, backgrounds, identities, genders and beliefs. Each person recounts their individual stories, but the unifying thread that weaves its way through the narrative is the enduring trauma that pervades our society.

Two decades have passed since the Good Friday Agreement yet we still encounter the paramilitary-run estates in Larne, Carrick and Belfast. It is a story of declining prosperity, lack of amenity, and educational under-achievement. There has been no peace dividend in these forgotten places with a “tinpot mafia” controlling communities and carving out their drug dealing fiefs. Several contributors suggest Protestants in these areas now fear their own side more than the other.

The new Irish Sea border is a disaster and a betrayal | Belfast News Letter https://t.co/AUxFDDKKWw

McKay gives a platform to many alternative voices but the sense of uncertainty and fear is ubiquitous, going far beyond the loyalist estates. Compromise and negotiation should be the foundation of a healthy democracy, but in many unionist communities this is the language of betrayal. The awareness that they cannot fully trust the UK government, combined with an enduring fear of nationalism, has accentuated a nihilistic philosophy.

With nowhere else to turn, the re-introduction of violence into the political narrative is increasingly considered an acceptable response. Even everyday initiatives, such as moves to create a shared society, are condemned as appeasement. “Sectarianism is deepening, and views are getting entrenched”, observes Tim Cairns, “There is a sense that things are going backwards.”

Many contributors reflect their disappointment that unionism has failed to articulate a progressive vision. This is a movement that suffers a perpetual sense of threat and instinctively returns to its roots. And there is no greater threat than the Protestant who challenges the narrative. Even Mervyn Gibson ruefully acknowledges, “the first thing unionists do is look for the Lundy in the room.” The narrow ground of politics, articulated by ATQ Stewart in the 1970s, expanded only modestly in the wake of peace and appears to be retrenching once more.

The undercurrent of trauma goes well beyond the political sphere, as stories from the LGBT+ community confirm. We meet Anton, a gay man, and a church-goer, living in a society where his sexual orientation is openly condemned as “an abomination".

Alan McBride, whose wife, and father-in-law were killed in the Shankill bomb, used to chase Gerry Adams round the world with protest placards. He came to realise that “we live in a society that is so abnormal” and that republicans had struggled to adapt too.

His teenage experiences led to serious mental health problems. Fortunately, the acceptance of his Christian Aunt, a welcoming church and a shared love of place rescued him. But Anton knows other young men or women, rejected by their families and communities, who fell into addiction or took their own lives. We can only hope that the homophobia openly expressed by several senior personalities in the book holds a mirror to our society that leads to lasting change.

Just finished this absolute beast of a read. So much to think about and fuel for many conversations to come. Thanks for all the hard work you put into this book @SusanMcKay15 pic.twitter.com/6SSBTIXftu

But it is perhaps the women’s experiences that are most vividly drawn. The heart-rending story of Chrissy Quinn, still traumatised after the shocking sectarian murder of her children; the courage of Toni Ogle, standing up against paramilitaries who executed her daddy; or the determination of Dawn Purvis to change the loyalist mind-set. But anti-female attitudes also endure. Clare Sugden experiences “a growing rage from men” as she attends to her political duties while a female manager in mid-Ulster keeps a low profile, “it’s not good for women to be seen to be doing well”. Yet women refuse to be victims, and some are pioneering new ways of living. Stacey Gregg has spent her life, “emancipating myself from restrictions arising from shame".

And there are wider stories that are inspiring change. Hope McCauley returned to the North to set up a successful creative industry business; Lee Robb is working towards systems change with Positive Carrickfergus; and Mark Langhammer has rewritten the sectarian script to reach out across communities at Crusaders football club. New forms of identity and political expression are emerging from the grassroots with many young people moving beyond tired debates to focus on issues like climate change and resilient mental health.

Some of the stories delightfully reflect the rhythm of the North, which indigenous people will immediately recognise. The childhood pleasure of visiting a favourite aunt and being rewarded with tea and a bun. Unbroken attendance at Sunday school which was acknowledged with the gift of a new Bible. The iconic carvery where people “take away mountains of steaming meat, dodging collisions with the envious unfed, as they weave their way back to their tables".

In some respects, the language stretches beyond journalism into the best of Irish literature. There are surely echoes of Dubliners, with its unvarnished descriptions and everyday diction that allow us to experience the gritty realism of ordinary lives. Yet the narrative has been flipped. Instead of using Catholics to portray the cultural decline of nationalist Dublin, McKay has used Protestants to record the paralysis, entrapment, and disillusionment of the unionist North.

But while Joyce described a society in stasis, McKay is reflecting a society on shifting ground. Brexit has dramatically changed the economic landscape but most unionists feel it has also undermined their identity. Several business leaders regret the lost opportunity of May’s original offer but highlight the sea border is here to stay: “scrapping the protocol would make things ten times worse” remarks the owner of one prominent haulage business. There is demographic change, with new forms of identity that no longer accept old labels. Nor do they accept a religious dogma that imposes social and moral rules that are increasingly seen as outdated and illegitimate.

The inability of traditional Protestant culture to adapt is quietly creating a momentum for change. Alan McBride, whose wife, and father-in-law were killed in the Shankill bomb, used to chase Gerry Adams round the world with protest placards. He came to realise that “we live in a society that is so abnormal” and that republicans had struggled to adapt too.

Although still a unionist he acknowledges that “if Northern Ireland is not flourishing, and the Republic is, why would you not want to be part of that?” An ex-RUC officer is not averse to a United Ireland if there is justice. Sammy Douglas, the former DUP MLA, is more worried about the journey of a United Ireland then the destination where “you could probably live quite peacefully.” Several others accept there may be change in 15 or 20 years and are prepared to discuss what that might mean.

But to many northern Protestants, dialogue about a re-imagined future is the action of a Lundy. It is no coincidence that the arch-unionist traitor is ritually burned each year, as if in warning to those seeking a new narrative. McKay tackles this oppressive mental model by humanising the cultural artistry and owning the label, refusing to be cowed by a nameless, unreasoning, and unjustified terror which paralyses our efforts to advance.

'Northern Protestants: On Shifting Ground' provides an important analysis for future debate. As a society we urgently need to address the trauma that still pervades the North, with new investment and a holistic approach. But the social and economic context in which we live has forever changed and will continue to evolve. Acceptance of our shared democratic values and a rejection of the culture of fear may yet provide a platform that supports respectful dialogue, and an enduring solution for our unsettled land.