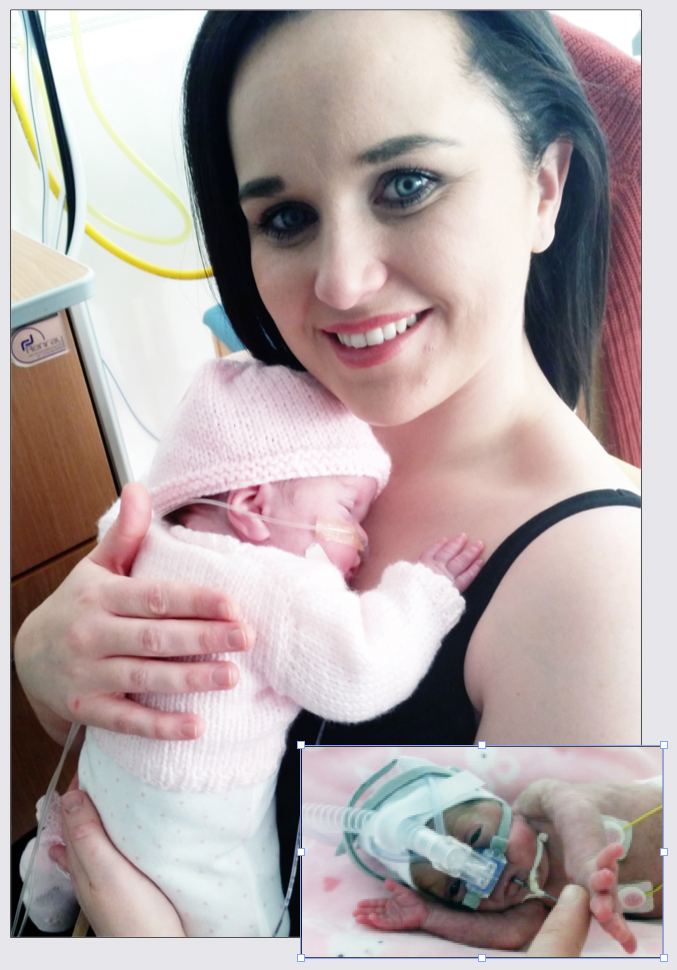 Fionnuala with little Meabh and, inset, the tiny girl battling for her life in hospital

A BELFAST baby who was given between zero and one per cent chance of surviving after being born four months premature is about to come home with her proud mum.

Fionnuala McArdle’s due date was February 2, but little Meabh made her appearance on October 9, weighing just over a pound. The wee fighter has been in the expert and tender care of the RVH neonatal intensive care unit since, where she’s battled all she’s been put through – including heart surgery..

Having come through the darkest days, little Meabh is on the home straight and should be back at her Bingnian home with mum Fionnuala by the end of next month. To thank them for their lifesaving work, Fionnuala is now pulling out all the stops to raise money for the neonatal unit that cared so wonderfully for her fragile daughter.

“My baby was due on February 2 but arrived on October 9 when I was just 23 weeks pregnant,” the 28-year-old told Daily Belfast this week. “In the lead-up to it, I kept getting out of breath and I knew something was up. I didn’t think it was a big deal because I had just had my 20-week scan a few weeks before and all was fine, but on the midwife’s advice I went to the hospital for a check-up.

“I was with my sister and we were in good form and having a laugh, thinking all would be okay. Then the doctor checked me over and told me I was three centimetres dilated due to bulging membranes. My sister got upset but I still wasn’t catching on to the seriousness of it all. Then they told me they would need to stitch me up to stop labour and I would need to be on bed rest to get me to 24 weeks.”

But Fionnuala didn’t make it to the 24-week mark as Meabh was born on October 9, sparking months of frantic worry as her family waited to see if the baby would survive.

“I went into labour and my baby was born weighing one pound and half an ounce – she was the size of my hand,” explained Fionnaula. “I was told it was too early and that my baby would not survive, I told them if there was any sign of life they must work with her. They used powerful injections but were still not convinced she would survive, I just kept asking them to please save her and do what they can.

“Meabh had to face heart surgery and eye surgery and she has come through it all. She is now out of intensive care and in a high dependency unit. She is on the home run and I can’t put into words how thrilled I am.

“This week she weighs five pounds and four ounces and I’m hoping that in five or six weeks she will be able to come home. She may come home on oxygen but it will only be temporary and I can deal with that.”

Fionnuala, who miscarried three times before conceiving Meabh, said her precious baby is the miracle she always hoped for.

“I can’t believe she is here. Every day I look at her and think the same thing: she truly is a miracle. Even the doctors are mesmerised by her and what she has come through and survived. They agree she is a miracle. She is just fantastic and I love her so much.”

Fionnuala has organised a family fun day to raise money for the neonatal unit that cared for her baby so well. On April 2 at Whiterock Leisure Centre, there will be bouncy castles, face painters, Irish and hip hop dancers and much more. Everyone is invited to come along and join the fun for a hugely worthy cause. Over £2,500 has already been raised online and donations are still welcome at https://crowd funding.justgiving.com/miracle-meabh