Businesses still in the dark one month on 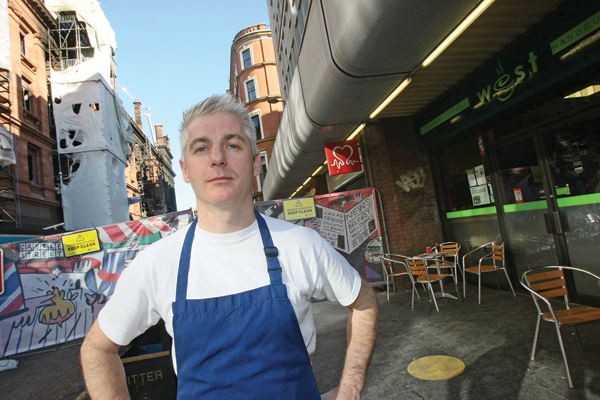 A MONTH on from the devastating Primark fire Castle Street traders remain uncertain as to whether or not their businesses will survive.
The gateway to the city centre for many West Belfast commuters, remains in parts inaccessible as a cordon, erected for health and safety purposes, is still in place from the front and side entrance of Primark to parts of Fountain Street. The cordon is likely to be in place for at least four months, which would result in the busy thoroughfare closed off until early 2019.
Two of the 14 businesses that still remain within the safety cordon, DV8 and Abacus Beads, are in the process of relocating to Castle Court and Queen’s Arcade.
It is understood Primark is to move into fashion retailer New Look’s premises at Fountain House in Donegall Place within the coming weeks.
Several signs have been erected around the Castle Street area proclaiming ‘business as usual’ while construction workers file in and out of the newly built Primark extension as the clean-up continues. Security remains at the safety cordon 24/7.
Proprietor of the popular City Picnic, which has remained closed since the fire having been within the safety cordon, Arthur McAnerney said he was “actively looking for new premises, talking to prospective landlords”.
"It's not easy having lost what we did in the fall-out from the fire but we are in the process of securing new premises and hope to keep all our team together and employed for Christmas,” he said.
Owner of West sandwich bar Paul Donaghy told the Andersonstown News that business had been “absolutely awful” and that a walkway was urgently needed to reconnect the city centre.
“People are having to walk the length of the whole town to get in here. Once the bad weather comes in they won’t be bothered, they aren’t going to do it.
“We were closed for a week when the fire happened. Business is not good, it’s getting worse actually. The more the bad weather comes in the more it is going to kill us,” he said. “Christmas is our busiest time of year, when it’s cold, snowing, people aren’t going to walk around here to get their lunch.
“We’ve been told the barrier will be up for the next four months, I don’t think any of the businesses will survive it. Either we are going to have to relocate as our other business is within the safety cordon and remains closed.
“We have been here 17 years. We opened here when all the units were empty in the street and then all the units started to fill up. We were looking forward to the Primark extension opening as they have been working on it for the past three years and then the fire happened but it’s not a good situation for anybody. Something needs to be opened quick.
“We have been offered rates relief for the premises that is closed next door but as for this unit we have to prove that our footfall is down, you just have to look at it to see it.”
Belfast City Council recently announced that it was to contribute £1.25 million to help towards the recovery of the city centre in the wake of the Bank Buildings fire after Primark pledged £500,000. Paul said that no money has been awarded as of yet.
“Our rent is due, our VAT is due. Trying to get our deliveries to the business is a nightmare and we have had parking attendants trying to issue our drivers with tickets.”
Tony Magennis, owner of Fruiterama Greengrocers, said business has been “very poor”.
“There is nobody telling us anything. You get the odd update from City Council but other than that no-one is telling us anything. Anything we have heard has just been on the news. We have been here 20 years. With the technology nowadays you would think they would have put up some walkway, that it would’ve happened by now.
“The whole town is crying out for it. North, South, East and West, that is the centre of the town at the top of the street and it’s heart-rending standing here.
“Our stock is perishable and we are trying to keep on top of that,” he said.
“Takings are 50-60 per cent down. Footfall is down nearly 100 per cent. We are an impulse shop and rely on people walking by. I think Halloween is cancelled this year for us.”
Manager of the Oxfam shop in Castle Street, Tra Walls, told the Andersonstown News that business hadn’t improved since she and staff last spoke to us in the wake of the blaze.
“I can’t see it picking up but maybe it could with the students moving into the newly built accommodation in Queen’s Street.
“We are going to stick some posters up to let the students know that we are here, that we have a sale on. Our sales are down by up to 50 per cent and business hasn’t improved.”