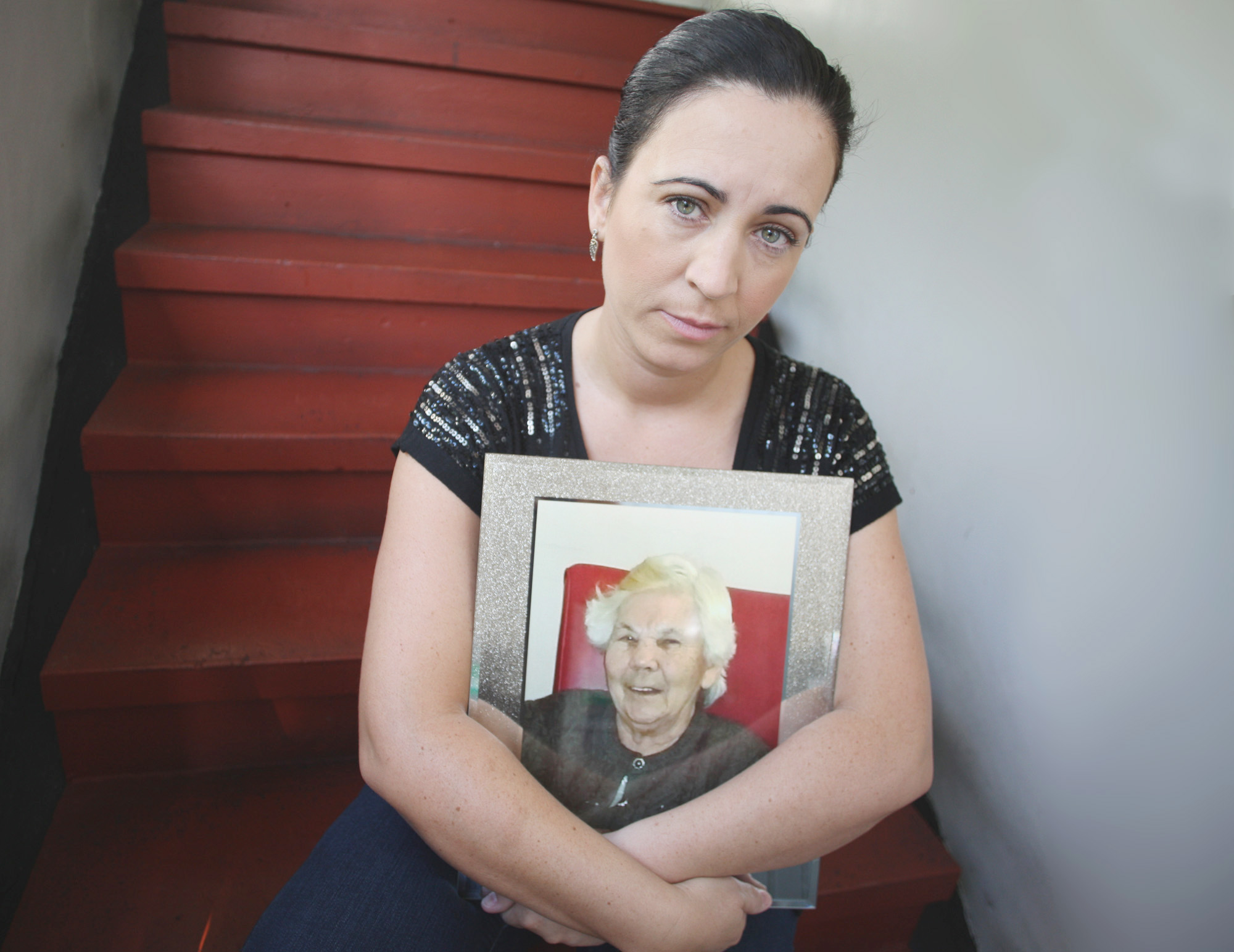 DEVASTATED: Julieann with a treasured portrait of granny Annier

POLEGLASS woman Julieann McNally has become the face of those seeking justice for their loved ones after last week’s damning report into the mistreatment of residents in Dunmurry Manor.
Julieann and her family first spoke with the Andersonstown News in November 2016 regarding their concerns about the South Belfast care home.
Speaking out after the shocking COPNI report was released last week, Julieann said: “Family was everything to my granny Annie (McCourt), first and foremost, family was the centre of her universe, I think that’s what pushes us on, we need to get justice for her because she would have done anything for us. Granny had ten kids, she was born in 49 Mary Street in December 1926. She was everyone’s granny, not just ours, everyone called her granny Annie, she loved life, she was a woman of great faith, a decent, kind, loving woman, she lived a good life, she did everything right.
“She was a caring human being and that same care wasn’t afforded to her towards the end of her life.”
On December 26, 2015 Annie McCourt was admitted to the Down Dementia Unit where she was assessed and her family were advised that she was no longer able to live alone. They then made the heartbreaking decision with advice from the dementia unit that a care home would be the best option for her.
Julieann said: “Granny came out of the dementia unit on January 14th 2016 and went into Dunmurry Manor. Her dementia journey in Dunmurry Manor didn’t last too long, however, as she left by ambulance on June 19th of the same year, she passed away on November 13th at my mummy’s Glenbawn home.”
It was after just six weeks in the home that Annie McNally’s family began to question the standard of care she was receiving.
“Within a matter of weeks, maybe six, that’s when we noticed things weren’t right in the care home,” said Julieann.
“Standards had began to slip. Initially there were missed meals, then we noticed a decline in granny’s personal hygiene, her bed was being made up by the staff while it was soaked with urine and covered in faeces.”
On June 19, 2016 at 3.30pm Julieann received a phone call from Dunmurry Manor to say that her grandmother ha been found sitting on the floor.
Julieann said: “The care home told me granny Annie had been found sitting on the floor, which I found very odd. They said they thought she had a urinary tract infection and wanted to give her an antibiotic. I immediately gathered my sisters and cousins and we drove up.
“When I opened her room door she was sitting on a high backed chair with her head slumped, she was mumbling and couldn’t speak, she was burning up and her hair was very sweaty. She had vomit down the right hand side of her clothes.
“We asked the home to get an ambulance and the carer came in and asked if that was necessary, we told them yes. I went to pack a hospital bag for her only to find that all her belongings were missing, I was brought up into the dining room and told to go through all the boxes, that ‘Her stuff should be in there somewhere.’ When the ambulance arrived they questioned the care workers as to why they didn’t see fit to call one earlier. They said they thought she was okay. When we got her to hospital we discovered she had kidney failure, pneumonia, e coli, septicemia, hypocalcemia and she was dehydrated. We were devastated.”
Julieann continued: “She stayed in the RVH for a while before being transferred to the City. It was while she was in the City that we thought she was going to die. The hospital kept insisting that she must have had a fall due to her kidney injury. We found out at a meeting two months later with the South Eastern Trust and Runwood Homes that granny Annie been found face down lying on the floor and that it was ten hours later that the family were contacted. She could have had a head injury, we don’t know, we were never given the full facts.
“She came out of hospital on the 15th July with a full care package and was brought to live in my mummy’s, we knew she was coming home to die but we didn’t know how long she had left.”
Describing her reaction to the COPNI report Julieann said: “It makes for horrific reading, we expected it to be bad but not for one minute did we imagine it would be that bad. We are so hurt and angry. The report was sixteen months in the waiting, granny Annie’s accident was almost two years to the day of it coming out.”
Discussing what’s next Julieann said: “We currently have civil proceedings in place and we have written to the coroner with regards to an inquest. Six of the families met KRW Law in Belfast City Centre where we were told Joe McVeigh and KRW Law are considering the report with a view to possible criminal liability and the role of all statutory agencies. After last week’s report was published we asked Pat Sheehan and Mary McArdle from his office to arrange a meeting with some of the agencies that were discussed in it, especially RQIA, their lack of empathy through the entire process, especially after the report was published has been horrific. Their CEO came out and said they didn’t get it wrong and they don’t agree with COPNI’s findings, there’s no accountability there at all.”
Families of Dunmurry Manor residents and their supporters will stage a protest outside the RQIA offices in Lanyon Place on Friday at 11am.