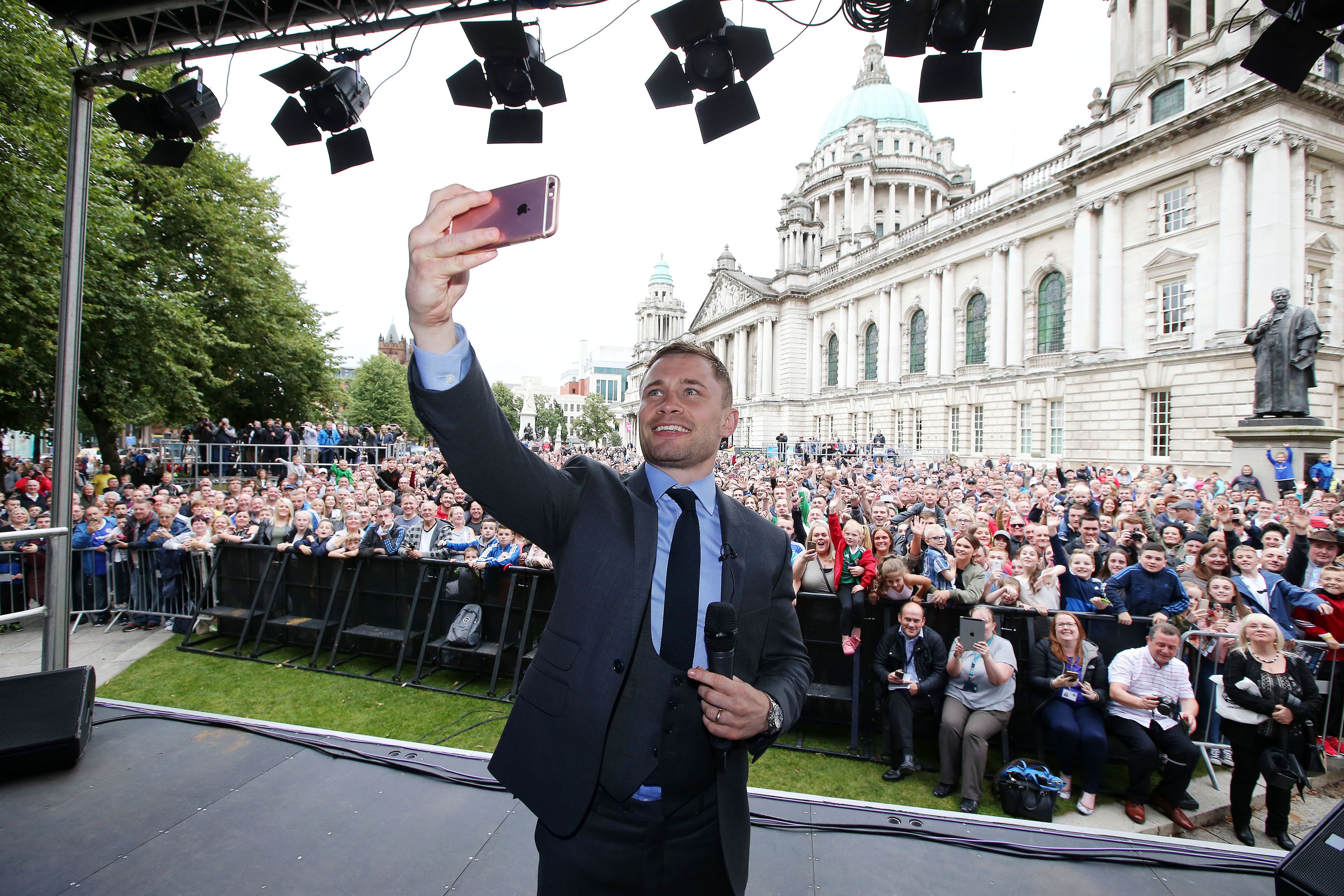 'The Jackal' may have found Jamel Herring a step too far, but his legacy is secure as he exits the sport leaving fans with a lifetime of glorious memories

GLORIOUS farewells are few and far between in the most brutal of businesses and Carl Frampton's swan song did not get the happy ending he and his legions of fans had craved in Dubai on Saturday night.

The old magic that brought him to the very top of the sport was a distant memory as his 34-year-old body just couldn't replicate what the head and heart wanted so badly, as Jamel Herring decisively retained his WBO super-featherweight title in the sixth round.

There is no hiding place in the squared circle. The spotlights lay bare the harshest of truths and it was apparent from an early stage that Frampton's daring bid to claim a world title in a third weight division just wasn't going to come.

He tried everything, but conceding so many glaring advantages to the New Yorker left him exposed to a finish that mercifully came with cornerman Jamie Moore launching the towel to save Frampton from himself. This was not how it was supposed to be, but boxing doesn't do sentiment.

"Everything I felt I needed to do in the fight I was doing in the gym, so it's really strange," he reflected.

"Herring was good on the inside, keeping it long, sharp shooting...

"I'm disappointed with how it ended with Jamie throwing the towel in, but it was probably the right decision. As a coach, it's his decision and he has to look after the fighter's safety.

"I'd have fought there until I was carried out. I don't know how bad it was looking towards the end, but I would have always kept fighting."

Frampton will now return to a home and life that he earned through hard work, built with his fists.

Emotional at the end, he had hoped that he could have paid the most perfect of tributes to his late amateur coach, Billy McKee, who passed away in February. But his mentor will have looked down with pride, as should Frampton, for what he achieved inside and just as importantly, outside the ring has left a glorious legacy that showed the best of Belfast.

Back in 2010 when he claimed his first professional title in a second round stoppage over Gavin Reid for the Celtic strap, those who had been in attendance at the Ulster Hall walked out into a freezing cold night sure they had something very special on their hands.

Frampton didn't let anyone down. The Odyssey Arena was where he won the Commonwealth title against Mark Quon on a Paul McCloskey undercard, but the venue would soon be his. 'The Jackal's Den' as it became colloquially known, was home to some of the great nights.

The European title victory over Kiko Martinez saw every seat in the house filled as the secret was now out: Frampton was a star attraction and delivered performances to match.

It was another night for the thermals at Titanic Slipways in September 2014 when he repeated his victory over the Spaniard, this time for the IBF super-bantamweight world title, as 16,000 fans danced and sang into the following day. All back to The Europa for a party.

Scott Quigg and he circled one another for several years before they finally collided in February 2016 at the Manchester Arena in a world title unification clash.

The Bury man may have been just a few miles from home, but Frampton was the crowd favourite as the same number who watched him win his first world title took over Manchester with 'The Jackal' victorious to settle a rivalry and become the first Irish boxer to unify world titles.

That in itself would have been enough to cement a legacy, but there was much more to come.

Featherweight was next and a clash with an earthquake called Leo Santa Cruz at the Barclays Centre in Brooklyn. On a hot summer night in the Big Apple, Frampton was on fire as he scored what must rank as one of the greatest ever away victories for a fighter from the Emerald Isle as he tore up the script to send shockwaves through the sport, claiming a world title in a second weight class and securing the prestigious Ring Magazine's Fighter of the Year award for 2016.

While the traveling fans may have been fewer due to emptying the piggy banks for that summer's European Championships in France, the support was just as strong with New York's Irish Americans taking him to their hearts. How could they not? Indeed, Westchester County Executive Robert J Astorino declared July 12 'Carl Frampton Appreciation Day' in recognition of their temporary resident.

He lost a rematch with the Mexican in February of 2017 when Las Vegas became a little corner of Belfast for the weekend, but gracious in defeat as he had been in victory, he spent the Sunday with fans in the Nine Fine Irishmen bar where he, and not for the first time, put his hand into his pocket to buy a drink for everyone who was there to commiserate but also celebrate.

The Santa Cruz trilogy fight didn't materialise but it wasn't for the lack of trying.
Instead, with a new team following a split with the McGuigans it was time to rebuild back at the venue he made his own.

Horacio Garcia arrived in town with Saul 'Canelo' Alvarez as support but Frampton took the win before victory over a true great in Nonito Donaire - one that perhaps hasn't got the credit it deserves.

A lifetime ambition to fight at Windsor Park would be realised as he packed out the stadium for a win over Luke Jackson - a fight that probably didn't deserve such a stage but this was about much more as it proved to be a last dance on home soil.

Defeat to Josh Warrington in an IBF featherweight clash in Manchester just days before Christmas in 2018 seemed to be the end and for a time it was, but the lure of winning in a third weight division was too tempting to turn down.

Bad luck would play a part in the aftermath with a pillar crashing down on his hand in a Philadelphia hotel lobby just days out of a planned fight with Emmanuel Dominguez in the summer of 2019 that would prove an omen.

There were a few routine wins after, but the planned return to Windsor Park in 2020 for the big one against Herring would not materialise with Covid-19 putting all of life's plans on hold.

They eventually did throw down in Dubai on Saturday, but it was just a step too far for a man who tried to do something that he could never have imagined when first pulling on the eight ounce gloves back in June 2009.

"It will probably take a bit more time to reflect on the things I've done after I get over this defeat.

"I'm proud of what I've done. If you'd have asked me at the start of my pro career, I wouldn't have imagined doing what I've done so I'm very proud.

"I wanted to go one step further and be a three-weight world champion but it just wasn't to be. I just didn't have it anymore."

Frampton may not have made that piece of history, but he retires with his legacy fully secure. The tributes poured in from fans and fellow boxers on social media after he confirmed this was it.

Already there have been calls for the wee man from 'T-Bay' to have a statue erected in his honour. It's the least that should be done.

For Frampton's career was about much more than his ring accomplishments, as the fans came from every corner of a city that is easier to divide than unite.

A fight week in Belfast was always special; the anticipation and build-up was simply incredible. The fight was more than just a sporting fixture, it was a life event with everyone engaged in their own way.

There will be sadness it's over, but pride that it happened, and we have been so fortunate to have him. He has given us everything, but now it's time for him to enjoy the fruits of his labour and put his beloved wife Christine, plus children Carla and Rossa first.

"Boxing has been so good to me but bad too," he added.

"I've missed so much of my kids growing up. There are times when my wife has had to raise the kids, my kids, on her own because I've been away so long.

"I've missed important things I shouldn't have missed, but it changed recently. The first part of my career was all about boxing so I was just a bit of an asshole really, but now I'm just looking forward to dedicating the rest of my life to my wife and kids.

"I was fully confident I was going to win this fight, but it wasn't to be, so that's it - I'm done now. I'm proud of my career and what I've done, but realistically there is probably no way for me to win a world title again, so that's it."

This is it; the day had to come. On Saturday night we raised a glass in his honour and will likely do so again.

It feels strange writing these last few words on the career of a man who transcended a sport in which he achieved greatness, whose career helped forge lifetime friendships. A fighter, a father, a husband, a son, a gentleman, a hero and yes, a legend. Thank you for the memories.