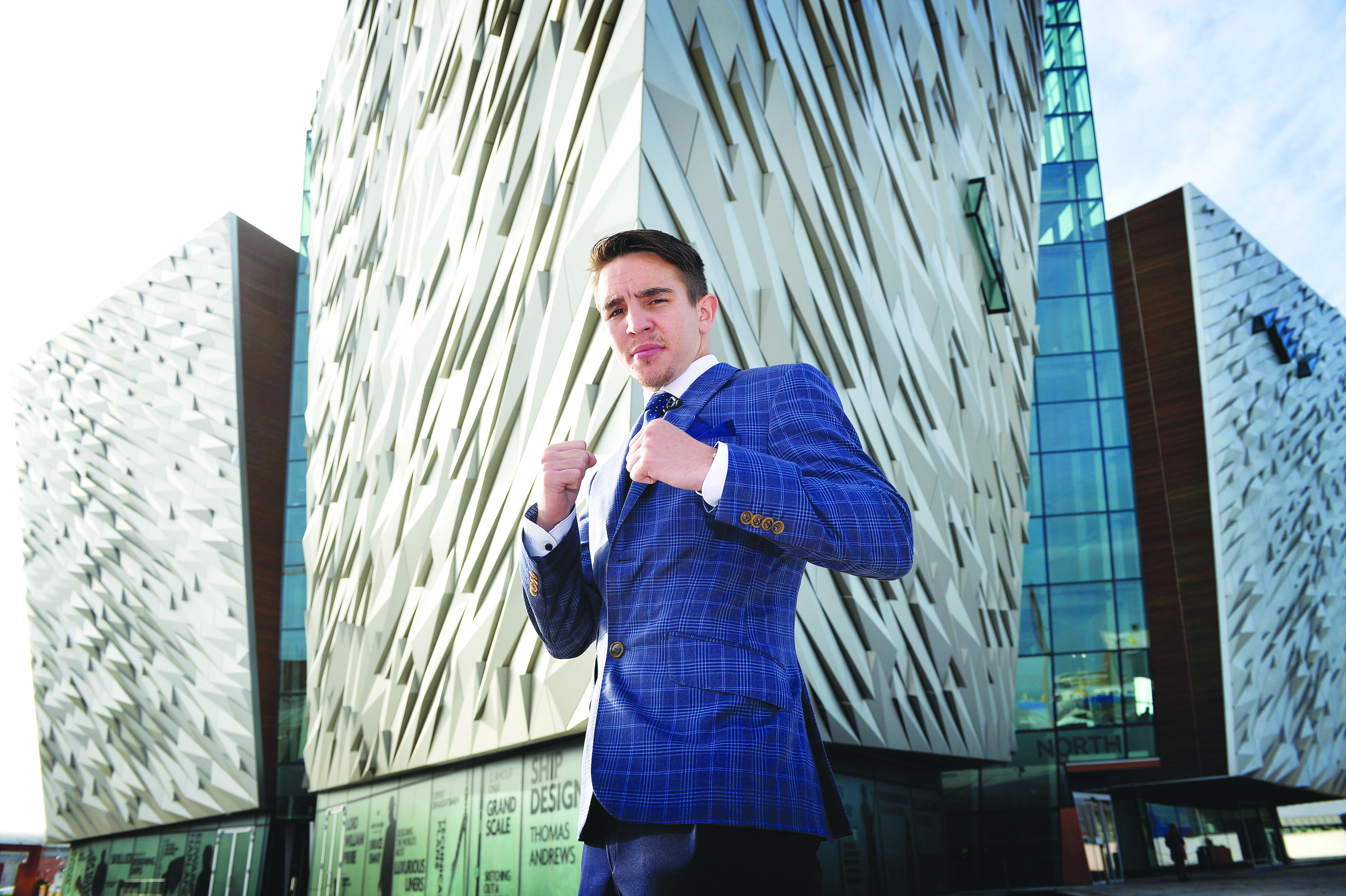 FIGHTING for or defending a world title in a revamped Casement Park is the ultimate dream for Michael Conlan who will begin his professional journey at Madison Square Garden, New York on St Patrick’s Day.

The 24 year-old launched his trans-Atlantic journey at Titanic Belfast last Friday as media, fellow boxers, friends, family and fans gathered to listen to the West Belfast man who was joined by his manager, Matthew Macklin and Todd duBoef – president of Conlan’s promoters, Top Rank.

There will be no rushing the career of the world amateur champion who enjoyed a glittering career with the vest, but his ambitions in the paid ranks are great and while he will be based primarily in the United States, West Belfast will always be home and it is here where he wants to bring the big nights to in future.

“I have always said Casement Park would be a great place to fight because it's in West Belfast and it is my home stadium,” said the Falls man who will campaign initially at super-bantamweight.

“I thought that would always be a great place to fight and now it has enough seats. It looks like a mini Aviva Stadium and it's somewhere I would dream of fighting in, just 10 minutes from home.”

Given his good relationship with Macklin who also manages his older brother, Jamie, inking a deal with MGM was far from a surprise for Conlan, but his promotional tie-up with a giant in the sport like Top Rank was a huge move.

The Las Vegas-based outfit already promote some of the biggest names in boxing such as Manny Pacquiao, Vasyl Lomachenko and Terence Crawford with a reputation of guiding former amateur standouts to the top of the tree as professionals, so the signing made sense for both parties and has come at the right time according to Conlan.

“If I had gone pro after London it would have been too soon,” he opined.

“I think I have turned over at the right time with the best team in MGM and Top Rank. There's not a better set-up for me to be a part of and I'm delighted to be on this journey with these people who have brought people from Olympic level to world champions.

“Top Rank do it time and time again. When I started working with Matthew he told me that Top Rank always help people achieve and become world champions, so for me it was an easy decision to make.”

Conlan will travel to Los Angeles next week with Macklin to meet trainer, Manny Robles who also looks after another former Irish amateur star, Jason Quigley. Having the Donegal man there will of course help with the move that becomes permanent in January when Conlan will be joined by his fiancé, Shauna and daughter Luisne as they embark on their new life in California.

“Going to America is a big change for me so I want to make sure I'm 100 per cent comfortable with the team around me and who I'm working with,” he explained.

“Me and Matt are heading out on November 10 to do some training with Manny Robles to see if I gel with him. If I do then that's how I will be with.

“I want to have a look around and figure out where I'm going to live because me and Shauna are going to move out on January 8 at the latest because I want to have an eight-week camp for the first fight. The camps will get longer, but with this being a six rounder, eight weeks should be enough.

“I spoke to Manny. He is excited and has been speaking to me over the last year because he was involved with a WSB team, liking my videos and things like that.

“I have seen videos of him working with Jason and I like how he does his padwork. As a coach I asked Jason what he was like because Jason is a box-fighter like me, not just a brawler and he said he was perfect for us because he's all about defence. I'm a mixture of both so someone who looks at both defence and attack is perfect for me.”

Getting settled is vitally important for Conlan as he embarks upon his career that he believes can lead to great things.

There is no doubting his boxing pedigree given his impressive amateur medal haul and feels just some slight adjustments are needed in terms of sitting down on shots and adapting to the increase in rounds.

“I don't expect much to change with my style, just to add a bit more stamina for the longer rounds and to sit down on my shots a bit more,” he said.

“But for me I feel I have been training like a professional over the last lot of years with the Irish set-up twice a day, so it will be the same. I will be as dedicated as much as I always have been and I'm aiming for the highest achievement as I can and that's a multi-weight world champion. That's what I believe I'll be.

“Top Rank have the best matchmakers in the business and they will know how fast I can move. We will see after the first fight how things are going, but if we can move quickly then I will.”

Conlan revealed there are plans in place to ensure he fights back at home at least once per year. While the United States will be his main base, he is not turning away from his home country and intends to build a fanbase on both sides of the Atlantic.

“I want the Belfast and Irish public to be part of my journey and I think Top Rank will do that with at least one a year depending on how it goes, so Ireland could well become our second home,” he explained.

“Our big fights will be in America, but we could even have a quarter of them here so Belfast will be a hotspot too.

“I have to have one fight a year in Ireland, whether that's Belfast or Dublin and I would love to fight in Dublin too because that's been my home for the last seven years with the Irish set-up. I love the city and my da's from there so hopefully.”

Those big fights and big nights is where Conlan will create a legacy and his ambition is to become a global superstar in the sport. Given what he has achieved as an amateur, he is rightly confident he can replicate and surpass those achievements as he looks to make his professional bow in New York on St Patrick’s Day.

“I don't just want to win a world title even though that's a great achievement,” he stressed.

“I want to win world titles in different divisions. I know I'm big enough to go through the divisions. I want to be Ireland's greatest ever fighter, but then I want to be remembered as a great the way Hagler, Hearns, Leonard, Mayweather are. I'm not saying I'm going to be better than these guys, but that's how I have to think and in my heart I know I have the ability and dedication to do that.

“I want to be in the limelight and seen as the face of boxing. I think these guys can make that happen.

“I think the image is a guy who has the confidence in himself. I've never trash talked, I just feel like a confident guy, wouldn't think would be cocky, just confident.”