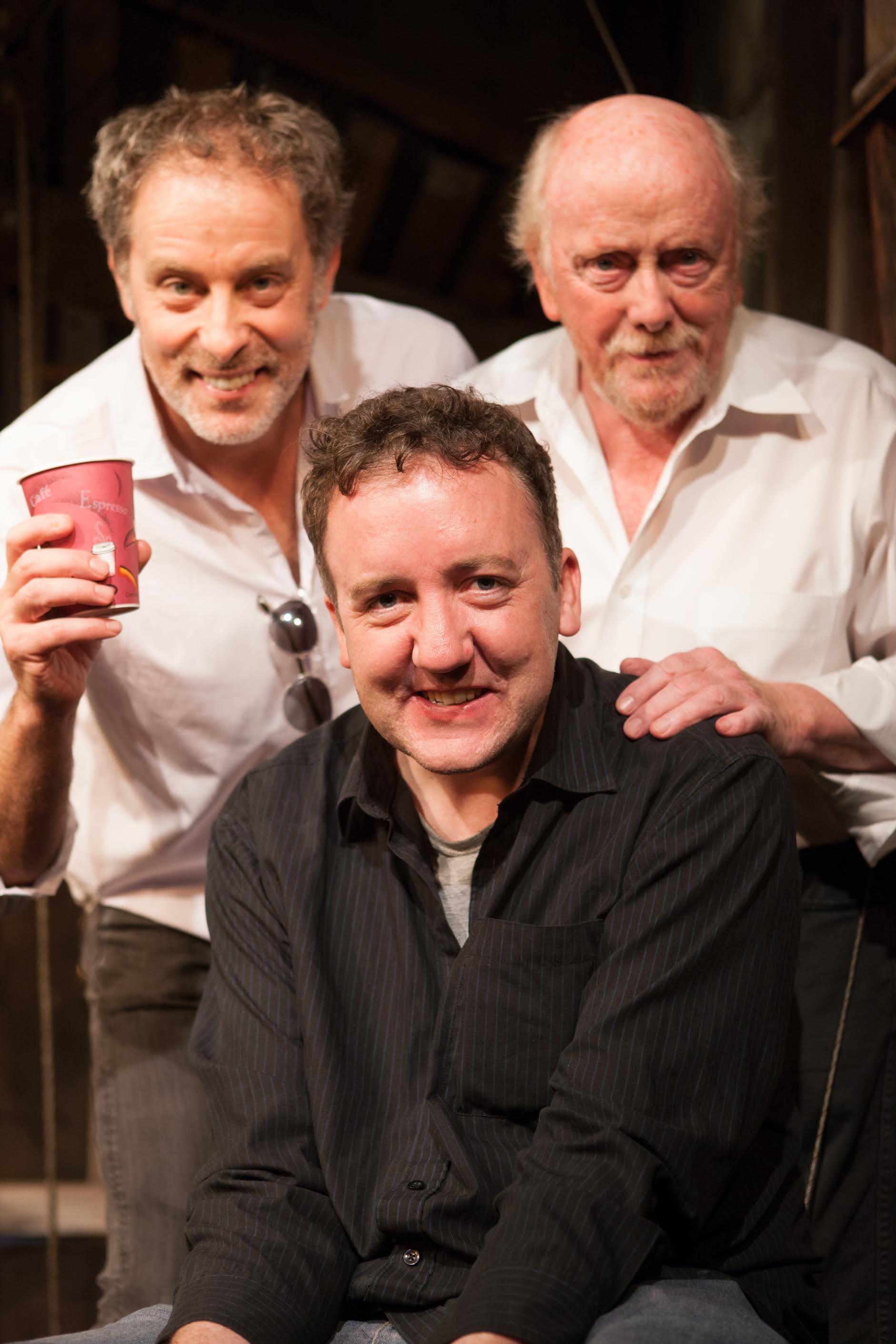 John McManus, front, with the cast of the ‘The Quare Land’, Rufus Collins, left, and Peter Maloney

John McManus is an instantly likeable fella. And it’s not that the writer of the winning play from this year’s 1st Irish festival has what Shakespeare termed the “glib and oily art” of phonies.

Rather, the Cavan man’s honesty is part of his charm. Asked how he chose the one play he planned to see while in New York, he immediately replied: “Simply because she [the actress] is very good looking.”

And how was it that he began writing plays? “My mother made me.”

That was 10 years ago, when McManus, then working as a plasterer with his father, entered a competition to write a radio play for Ireland’s national broadcaster, RTÉ.

He came first of 365 entrants, winning the P.J. O’Connor Award and prompting Mick Lally, legendary actor and late co-founder of the Druid Theatre Company, to urge McManus to write a stage play.

He wrote two – in two weeks – the second of which, ‘The Quare Land’, now is being staged in New York. Not only is McManus having a play produced overseas in America’s only Irish theatre festival, but it is getting a substantial run at a highly regarded Manhattan establishment, the Irish Repertory Theatre.

McManus, now 35, completed the prestigious, invitation-only New Playwrights Programme at Dublin’s Abbey Theatre last year and is working on his fifth play, his third for the stage, ‘Klondike’ (a County Cavan colloquialism for anything worth a fortune, after the Canadian gold-rush mining town).

We spoke on the opening night of ‘The Quare Land’, which earlier in the week won most of Origin’s 1st Irish festival awards based on preview performances. The production stole four of the seven jury awards: best play for McManus; best director for the Rep’s Artistic Director Ciarán O’Reilly; best design for Charlie Corcoran; and a special jury award for Peter Maloney. Peter would be the fella in the bath. The play is about a farmer taking his first bath in four years when a stranger walks in.

The inspiration? “Only because there had never been a play set in a bathroom,” said McManus. “There are thousands set in kitchens.”

And why was it a hit at 1st Irish? “I think it’s just the bathroom, really, honestly I do. If I heard of a play about an aul’ fella taking his first bath in years I’d be inclined to go and see it.”

However, since the stranger has come to try and buy a field from the soaking farmer, McManus added that it does contain, “land, greed, one-upmanship – classic issues.”

After writing his play he learned that ‘The Field’, an epic Irish play and film with similar themes, had a line in it where the wife says her husband hasn’t taken a bath in a year.

McManus has stayed close to the land of Ballyconnell, County Cavan (pop. 1,060 according to the 2011 census). Not only had he not been to the United States before travelling to the Rep for a reading of the play last year, McManus had never left Ireland.

“I had never been on a plane before,” he said, responding to my amazement, in this era of the globetrotting Irish, with a shrug of his large shoulders, an easy laugh, and a deadpan observation. “I had nowhere to go.”

Maybe McManus was a bit like the great writer John McGahern, I ventured. The two came from places just 11 miles apart across the Cavan-Leitrim border. McGahern told me once in an interview that he preferred “to know a small place very well” than to try and acquaint himself with the wide world.

The former plasterer is now writing full time, since, as he said, “I threw in the trowel.”

He went on: “The timing was brilliant. The construction boom was ending and he [McManus’s father] retired and then I was free to write.”

His father is also “a brilliant mechanic”, he said, and having seen the perverse but ingenious beer-cooling system McManus junior envisioned for ‘The Quare Land’, it seems he has touches of the same.

The conversation flows like the Shannon, covering at one point the stereotype McManus refers to as “the mean Cavan bastard thing”.

“That was invented by Niall Tóibín,” McManus said. “He’s married to a Cavan woman so he can get away with it.”

McManus never went to college but his conversation is sprinkled with well-read references.

His path into writing started with the RTÉ contest (in which he was a runner-up in 2008, after winning in 2005).

“I only did it to appease her [McManus’s mother],” he said. “I used to write essays in primary school but I hadn’t written since.”

His approach seems very instinctive. For the first play, he said, “I was out walking the dog and I heard a man cutting down a tree. I thought, ‘there’s a sound effect’ and built the play around that.”

The man from Ballyconnell makes everything seem easier and simpler than it is.