Cecilia moving on after an eventful 15 years 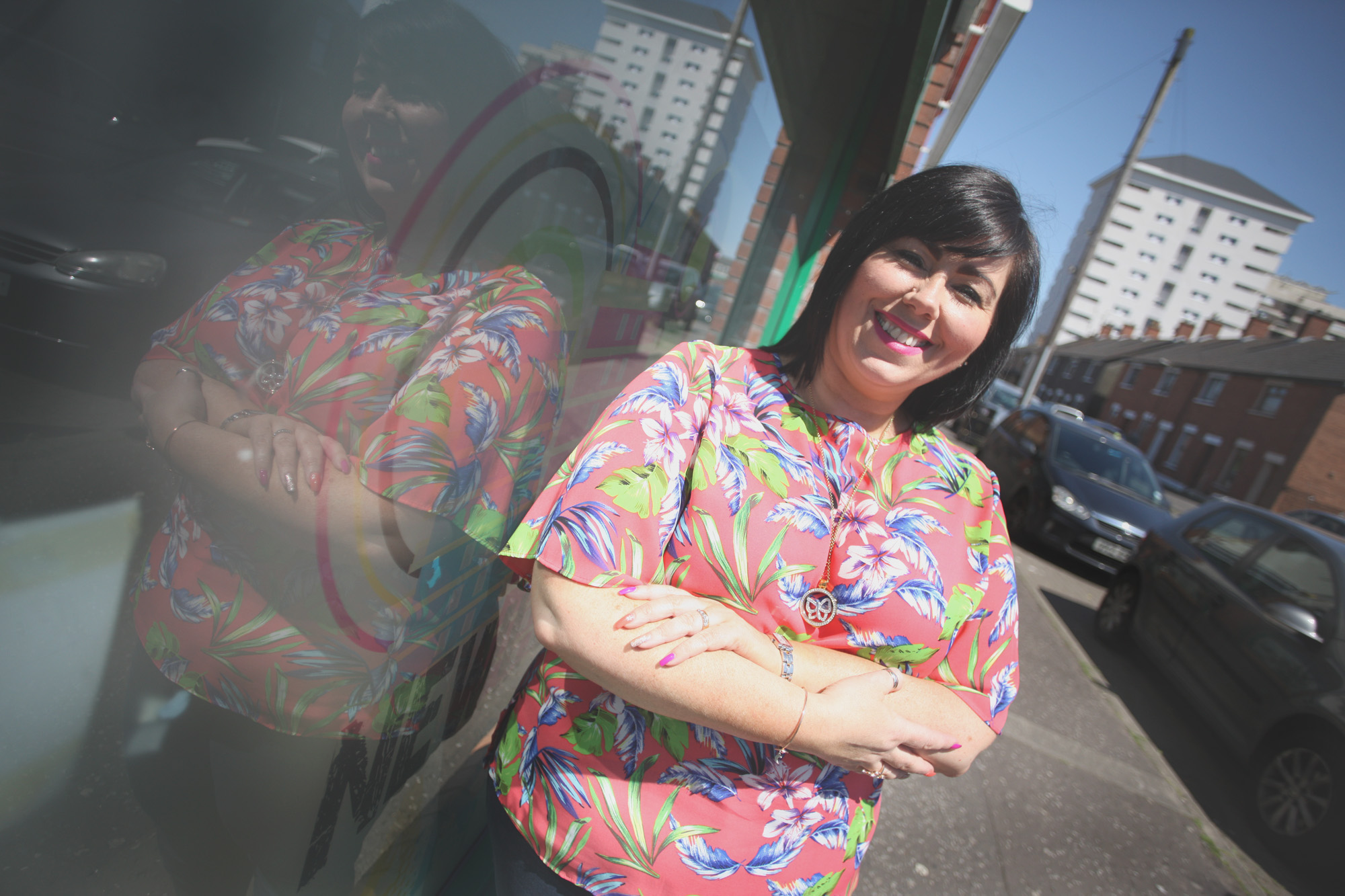 IT is the end of an era at New Lodge Arts and for the wider North Belfast community as Cecilia Herron stepped aside after 15 years of service.
Community stalwart Cecilia has worked in a number of different roles during her time at New Lodge Arts, and had most recently served as a Good Relations Arts Worker, but she can proudly say that she has been there since the beginning.
This week, the North Belfast News caught up with Cecilia to reflect on a decade-and-a-half of invaluable service, and to find out what the future has in store.
“I’m moving to Queen’s University,” Cecilia explained.
“I’m going to be working with students, based mainly in Elms Village and organising events for them and pastoral care programmes. I’ll also be helping to open two new sites in December.
“It will be quite different. It’s a diverse job, and what I loved about my 15 years here is that no two days are ever the same.
“It has provided me with a wide range of contacts across North Belfast and I have made many amazing friends. Those contacts will remain with me and I will keep in touch as much as possible.
“Since I first got the job at New Lodge Arts I have never looked back. It has been amazing for me.
“I have two sons, and when I started here they were in the day care, which is in the same building. I would have walked past the building and looked in to see them. You really felt that it was home from home. We came in together in the mornings and we left together in the evenings. My cousins worked in the day care so it was family minding them.
“The whole community aspect of the Ashton Centre just made it amazing. There was a lot of people I knew from the area working in it too, so I was able to fit in fairly quickly.”
Cecilia’s work has predominantly been about bringing all sections of the community together to work on shared projects and goals, and she insists that building trust has been the key.
“I love a challenge and the job has had its challenges over the years, there’s no doubt about it – but I’m a firm believer that everything can be ironed out,” she said. “If you get people sitting in a room together and working together then you will always get through.
“It’s about relationship building and trust. If people have trust in you, then you can find a bit of a common ground.
“I think New Lodge Arts has had a massive impact on the area. We’re dealing with thousands of young people on an annual basis. It’s growing each year. It was set up for one year and I remember when it was set up that people said it wouldn’t last.
“People didn’t realise that this community was very much embedded in the arts beforehand, because we were having street festivals, we were having pop-up photographic exhibitions, but we didn’t have the same fancy names for it back then, it was just the community coming together
“New Lodge Arts has really put its mark on the area in terms of community spirit. We aim to provide things that are affordable and accessible, and we’re still doing it 15 years later.”
The years have been full of milestones and achievements for New Lodge Arts, and Cecilia has witnessed more than most. On a personal level, she said that her proudest achievement has been the foundation of the annual Lantern Festival – a multi-artistic celebration for the whole community.
“The lantern parade has been a massive achievement,” she enthused.
“It started as a small parade from Duncairn Gardens to the Waterworks, and since then it has grown.
“It has been really diverse and it has set off from a number of different places in North Belfast. The biggest achievement was moving it from the Waterworks to Alexandra Park, which is the only park in Europe to have a peace wall running through it. It’s a brilliant achievement for good relations, and for me it shows that all sections of the community can work together.”
One of the biggest challenges New Lodge Arts has faced came in recent months when the Arts Council announced a number of major budget cuts. Cecilia admits cuts have had a devastating impact on the group, but is hopeful that the arts will continue to flourish in North Belfast.
“Funding is harder to get than ever, so we need partnership work now more than ever,” she said.
“There have been challenges, but I would like to see New Lodge Arts going from strength to strength. We are still here, we aren’t closing, and I would hope that New Lodge arts will remain here for another 15 years at least.”
A new challenge now awaits her, and while she will undoubtedly be sorely missed, Cecilia said that she would continue working with a number of community groups in a more personal capacity.
“I can’t believe I’m leaving, but there are still things that I will keep on,” she said.
“There’s so much that I’m passionate about, and I can’t keep it all on, but it’s hard to walk away when you’ve made such good relationships with people.”
Finally, asked whether she had any parting advice for the New Lodge Arts next Good Relations worker, Cecilia said: “Most of all I would say just enjoy it. You need to get out and meet as many people as possible.
“Going into different community groups, finding out what their needs are and how you can work with them is how you build relationships – that’s the best thing about it.
“It can be complete mayhem at times, but when you look back on it all you think, ‘That was amazing.’”