Championship semi-final berths up for grabs 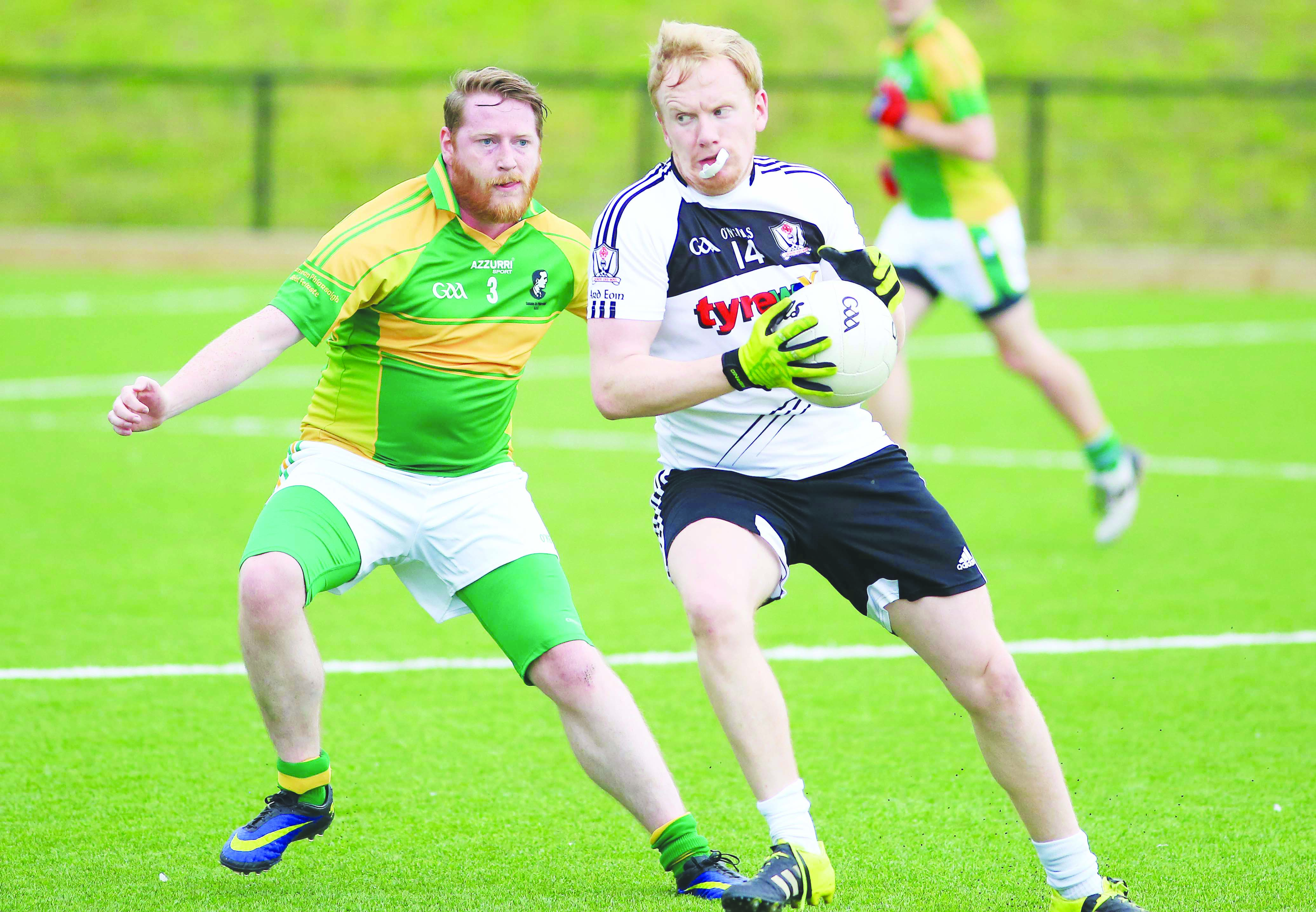 Ardoyne full-forward Ciaran McNeill claims possession ahead of Pearse's full-back Tomas O'Neill during the JFC clash between the sides last Sunday. The Kickhams are back in action this week when they take on Mitchel's for a place in the last four

THE Intermediate and Junior Football Championships will be whittled down to four teams each this weekend with St Paul’s taking on Moneyglass in the pick of the IFC ties.

The Shaws Road side have dropped down from the Senior ranks and will be one of the favourites for Intermediate honours this season, but they face a tough opener against the beaten finalists from 2014.

St Paul’s will make the short journey to Hannahstown (4pm) minus the services of Aaron Traynor and Conor Burns due to soccer commitments and manager Donagh Finnegan has expressed his frustration with the fixture-makers. “We only got notification on Monday that it was a Saturday evening throw-in. We were hoping to have the game played on Sunday,” said Finnegan.

“We are missing a few players now due to soccer commitments. I don’t understand why the fixtures can’t be released earlier.

“I don’t want to make a big thing of it but these guys are getting paid to play. It is a great way for young lads to supplement their wages and they can’t afford to miss it.

“Aside from that, our preparations have been going well. People are free from injury so that compensates for the players we will lose.” St Paul’s finished in the top six in Division Two prior to the spilt and remain in contention for promotion. Moneyglass, in contrast found themselves in Division 2B after the spilt but are unlikely to be dragged into the relegation mire in the final games.

St Ergnat’s have been eliminated in the last two years by the eventual Intermediate winners, Portglenone (2014) and Glenavy (2015), and Finnegan is adamant his side will need to produce a fine performance to progress.

“We have been playing well without playing absolutely top notch,” added the St Paul’s boss. “Moneyglass are an out-and-out Championship team. “Last year, St Brigid’s were running away with the league and Moneyglass turned them over in the Championship.

“Moneyglass ended up in the bottom six but they have real quality throughout the team so we won’t take anything for granted.” Finnegan added that the decision to drop down to Intermediate was just a reflection of where the club stands at present.

However, the Shaws Road side should have enough quality to edge a close affair.

Meanwhile, Éire Óg and manager Seamus McKenna is set for a busy 24 hours as he plots the downfall of St Comgall’s in the JFC on Saturday (Randalstown 5pm). McKenna is also the Antrim ladies’ manager and on Sunday morning he will board a flight with the Saffrons as they travel to Lancashire with a place in the All-Ireland Junior semi-final at stake.

The Derriaghy men have enjoyed a stellar Division Three campaign - bettered only by Ardoyne and St Comgall’s who gained promotion. McKenna admits Éire Óg are probably not ready for Division Two football but is pleased with the progress they have shown.

“The boys have been training hard and they will be full of confidence going into Saturday’s game,” said McKenna.

“We weren’t really expecting it (promotion). We were just hoping to build on last season. Our boys are happy with their progress this year, finishing third and maybe we can push for promotion next year. “I don’t think we are ready for that step yet but hopefully, we will be ready for a real promotion push next year.”

After blowing an eight-point lead during the league meeting between the sides, McKenna knows his side are capable of causing an upset on Saturday and stressed that all the pressure is on the Antrim men.

“We only played St Comgall’s once this year,” added McKenna. “We got a goal early in the second half to put us eight points up and, for whatever reason, we just stopped. “They came back and scored nine in a row and it was a blow to us.

“They are definitely favourites. All the pressure will be on them but we feel we can beat St Comgall’s on Saturday night if we perform to our ability.”

The action gets underway on Friday night with two Junior ties as Ardoyne face Mitchel’s at St Teresa’s (7.15pm) and St Malachy’s play Ballycastle at Creggan (7pm). O’Donnell’s versus Glenravel (2pm) in the JFC preceeds St Paul’s versus Moneyglass at Hannahstown.

Randalstown also hosts a double-header on Saturday with St Comgall’s clashing with Éire Óg at 5pm before the Intermediate Football Championship tie between St Enda’s and Dunloy. The remaining Intermediate quarter-finals will take place at Glenavy on Sunday with Rasharkin and Aldergrove going toe-to-toe at 5.45pm before Aghagallon and Tír na nÓg take to the pitch at 7.15pm.