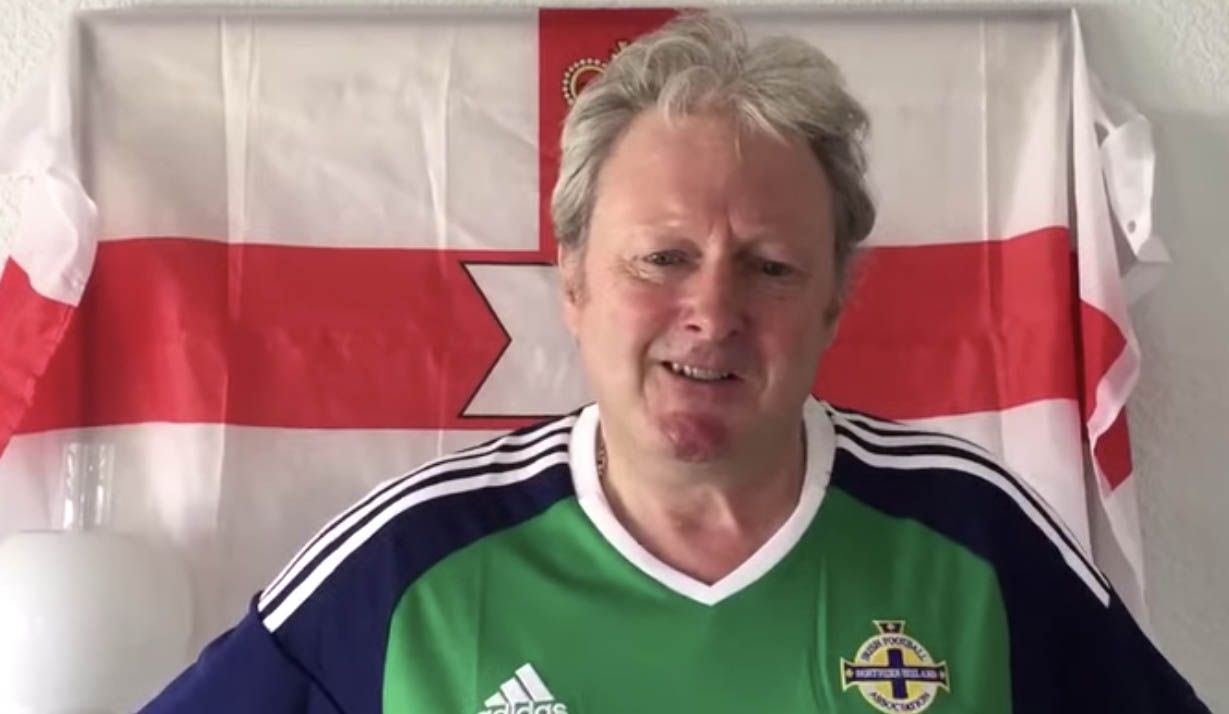 LIVE AND LOVING IT: Charlie Lawson

CHARLIE Lawson is going to co-present GB News’s live coverage of the Twelfth parade in Armagh with Arlene Foster, so he is.

You’ll be aware – or maybe you won’t, so you won’t – that BBC Ulster TV recently announced its decision to scrap its live Twelfth morning programme on the basis that that nobody watches it – and not on the basis that no Catholics are allowed to don the old bowler and white gloves.

It’s an illustration of GB News’ determination to match the BBC in viewing figures that it its live Twelfth coverage is in a morning slot whose audience is usually too small to be measured by audience research companies.

It’s all a bit strange, isn’t it? According to Ormeau Avenue, if more elderly Protestants from up the country were tuning in to hear the Pope getting kicked their live coverage would continue without a thought given to the fact that not one of the thousands of blokes with the sashes and swords is permitted to have the whiff of Mass about them. A senior BBC figure said that the Corporation would be concentrating on its recorded evening compendium to capture the “richness of the cultural event”. Can a cultural event be said to have richness  while excluding over half the population? Fittingly, that suggestion seems to Squinter to be a bit, ah... rich.

Assessing the chemistry be between Arlene and Charlie should make for interesting viewing. Might it be smouldering, given the former DUP leader’s legendary interest in boilers? She’ll be in the studio while Charlie has been given a roving brief which he tells us via Twitter will involve him walking the streets of Armagh with a camera crew. Clearly, Charlie’s not familiar with the production values for which Gammon TV has become famous during its short life, so it falls to Squinter to inform loyal Ulster’s favourite exiled son that his camera crew will most likely consist of a teenage intern with an iPhone.

– Excitement’s building as we head over live now to Armagh, where Charlie Lawson is sampling the atmosphere in the...
– You’ll need to put down that Buckfast before I talk to you, Stewarty.
– Charlie, you’re live.
– And Lil, try and tone down the language a bit before...
– Charlie, you’re on!
– What? Oh, sorry. Ahem. Go ahead, Arlene, girl.
– You’re in the Shambles, I believe.
– Ach, it’s not that bad. Lot of people pissing on gable walls and I’m tripping over beer tins and WKD bottles, but the craic’s 90, so it is.
– No, the Shambles – Armagh’s historic market district.
– Oh, right. Yes, I’m here with Stewarty and Orange Lil, so I am and they are having a whale of a time. What does this day mean to you, Stewarty?
– It means the world, Charlie, so it does.
– That’s my line, son, so you can knock that on the head for a start. Now, Lil, can you just let the viewers have a look at your T-shirt – that’s it. What does it say?
– No Surrender, Four-Day Bender.
– That’s magic, so it is. Can I ask you...
– Charlie?
– Silence.
– Charlie, can you hear me? Well, it seems like we’re having technical difficulties in Armagh, but we hope you’ve enjoyed our first live coverage of the Twelfth. Let us know what you thought of it by text or email. We don’t get many.

IT was back to work on Monday for Squinter’s pals and union colleagues on the Caterpillar picket line after they accepted a pay offer – under considerable duress, let it be said.

In this paper last week, one striking worker said that the factory would be a “powder keg” on the return to work, particularly after workers who crossed the picket received a very nice golden handshake from the company for doing so. And it’s not hard to see why the place won’t be the same.

It’ll doubtless be sausage, chips and beans in the canteen for the strike-breakers, some of them local, some who would describe themselves as socialists and republicans, who will find long after the financial pat on the head they received for being good little workers is spent that workers who suffered during industrial action have long memories. (You can do the sausage, chips and beans word puzzle yourself, by the way.)

Squinter has friends in the Post Office whose enmity towards and resentment of former friends and workmates has only deepened over the years. That relates to a strike which, at a guess, happened over twenty years ago. And it falls to Squinter to point out that there was only one winner in that particular battle – and it’s not the people who keep their heads down all these years later while others continue to hold theirs high.

ARLENE Foster took a break from her GB News Twelfth live coverage rehearsals (see more on facing page) to have a pop at Nicola Sturgeon after the Scottish First Minister welcomed the queen of England to Edinburgh. Nicola bowed as she was introduced to Liz Von Windsor – an act which prompted Arls to vent her displeasure on Twitter.

“Why did’t she curtsy??” she demanded, underlining the urgency of her intervention by spelling a word wrong and illustrating the deep import of her question by including two question marks.

“It was one of the greatest privileges I had as FM of NI to curtsy to members of the royal household including HM the Queen.”

Squinter doesn’t doubt the extent of Arlene’s regard for the royal family, or the burning rage she feels at the disrespect shown by the uppity Scot. But he would simply ask her to remember the best advice available to people in glass houses – or palaces.

When Prince Harry and Meghan Markle got engaged in 2017, before the couple became hate figures for several of Arlene’s GB News ubergammon colleagues, the then Stormont First Minister also raced to Twitter – this time to simper her approval.

“Congratulations to HRH Prince William on his engagement to Megan Markle. Wonderful news this morning!”

Now you could forgive a rebel like Squinter mixing up the royal brothers. And you might even overlook it if he didn’t care enough to spell Meghan’s name right. But you have to reckon it’s pretty embarrassing for a lifelong royalist to get so much wrong in one short tweet (although she later laid the blame on a hapless member of her staff). Some might even say it’s disrespectful – or at least less respectful than choosing to bow instead of curtsy.

Because even Buckingham Palace doesn’t give two hoots about whether a female bows or curtsies to the queen. It points out quite simply that “There are no obligatory codes of behaviour when meeting the queen or any member of the royal family”. In fact, not only is the Palace not hung up about the curtsy, it isn’t too bothered about the bow either. “Other people prefer to shake hands in the usual way.”

Just whyArlene had a got at Nicola Sturgeon in a week when the SNP leader announced her plan for a union-busting second Scottish referendum is anybody’s guess.

Bloomin’ cheek of the bloke

And the first paragraph delivers too: “A 69-year-old gardening enthusiast has slammed world leaders and the media for what he says is selective reporting on the NI Protocol.”

Robin Boyd from Donaghcloney is absolutely rippin’ it after a gardening magazine he subscribes to failed to include the free seeds it offered to GB readers. So he contacted the News Letter. But Squinter’s willing to be that not even Robin thought in his wildest dreams that his seed-based gripe would make a headline, but it did. And the world trembled.

“Yet so many world politicians are lining up to tell us the Protocol is working,” Robin said. “I would love to say to each one: ‘Not for me it ain’t, mate.’”
You got that, Maros? You listening, Mister President?