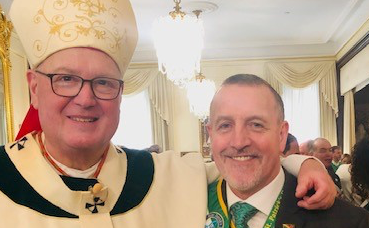 A FORMER INLA prisoner has said he is being “scapegoated” by the Trump Administration as he faces deportation from United States.

Malachy McAllister fled Belfast after a loyalist gun attack on his home in 1988 and now runs a construction business in New Jersey.

He was previously jailed for seven years for two attacks on the RUC officers during the 1981 hunger strikes. However, he was released in 1985 and took no further part in armed activity.

In 1996 Mr McAllister had an application for asylum rejected by the US Immigration and Naturalisation service, which considers his previous activities as “terrorist”.

Despite being a strong advocate of the Good Friday Agreement and having led a peaceful life in the US, the 62-year-old has been fighting deportation for decades.

He had recently been granted a 6-month reprieve, allowing him to stay in the US until June 5 (tomorrow) when he must report to the Department of Homeland Security for deportation.

Our Hibernian oath calls us to action “If a brother should be defamed, or be treated unjustly," We need to give action to these noble words in the case of Brother Malachy McAllister, who is facing deportation this Friday, June 5, 2020. - https://t.co/bJaSVFzwsf pic.twitter.com/iQ2UVjlsAy

Commenting on his ordeal, Mr McAllister insisted that the Trump Administration is using his case in a bid to appear “hard on terrorism”.

“The truth is there is no rhyme nor reason why the Trump Administration has chosen to deport me after 24 years in America,” he said.

“This was confirmed in a tweet by Congressman Peter King a long time supporter of mine and the GFA.

“My family and I were the victims of collusion in Northern Ireland by the British crown forces and loyalist paramilitaries. We fled Ireland in 1988 after an assassination attempt by the Red Hand Commandos.”

He continued: “However, we have to get past our history and build a future for all the people in Northern Ireland but the British government has to take responsibility for their actions if are to fulfil the tenets of the GFA and continue the peace process.

“Since leaving Ireland I have built a business, employed American citizens and been a good citizen of the U.S.

“Yes I am a republican and a former political prisoner but I have supported the GFA from its inception and campaigned across America for the past 22 years in support of the peace accord.

“I have great bipartisan support from congressional leaders, the Catholic Church Archbishop Cardinal Dolan, The Irish Consulate, The Irish Ambassador Dan Mulhall, Groups such as AOH whom I’ve been a member of for the past 22 years. They have lunched a campaign on my behalf in an effort to keep me here."

"They have all tried to get this administration to see the folly of there ways but to no avail," he says.

“Now I am going to be the sole and only sacrificial Irish lamb for the Trump agenda to let the world know they are hard on terrorism and no one will be spared when it comes to deportation and applying immigration law. But even President Trump's Sister Maryanne Trump Barry when she heard my case in 2006 said that my family and I should not be deported from the U.S. and called on the Attorney General to stop my deportation."

And Malachy says he sees clear links between the persecution of African American men by police officers in the US and his own experiences.

“There is a correlation between what is happening in America now, the past history of civil rights in America in the sixties and civil rights in Northern Ireland. Racism and Social Injustice especially in the Black community is very much evident today given the murder of George Floyd at the hands of the Police

“The stigma of being an ex-political prisoner will always hunt us and the criminalisation policy and convictions by the British Government on the nationalist community will follow us to our graves unless laws are changed though our elected representatives. Republicans and nationalists who fought against the Brits should not be branded as criminals. I have proved for the 32 years I have been out of Ireland that we are good people and law-abiding citizens of the world.”

Our homepage photo shows Malachy McAllister with staunch support of his bid to remain in US, Cardinal Timothy Dolan of New York.