Clonard sculpture was carved by an inmate of Nazi concentration camp 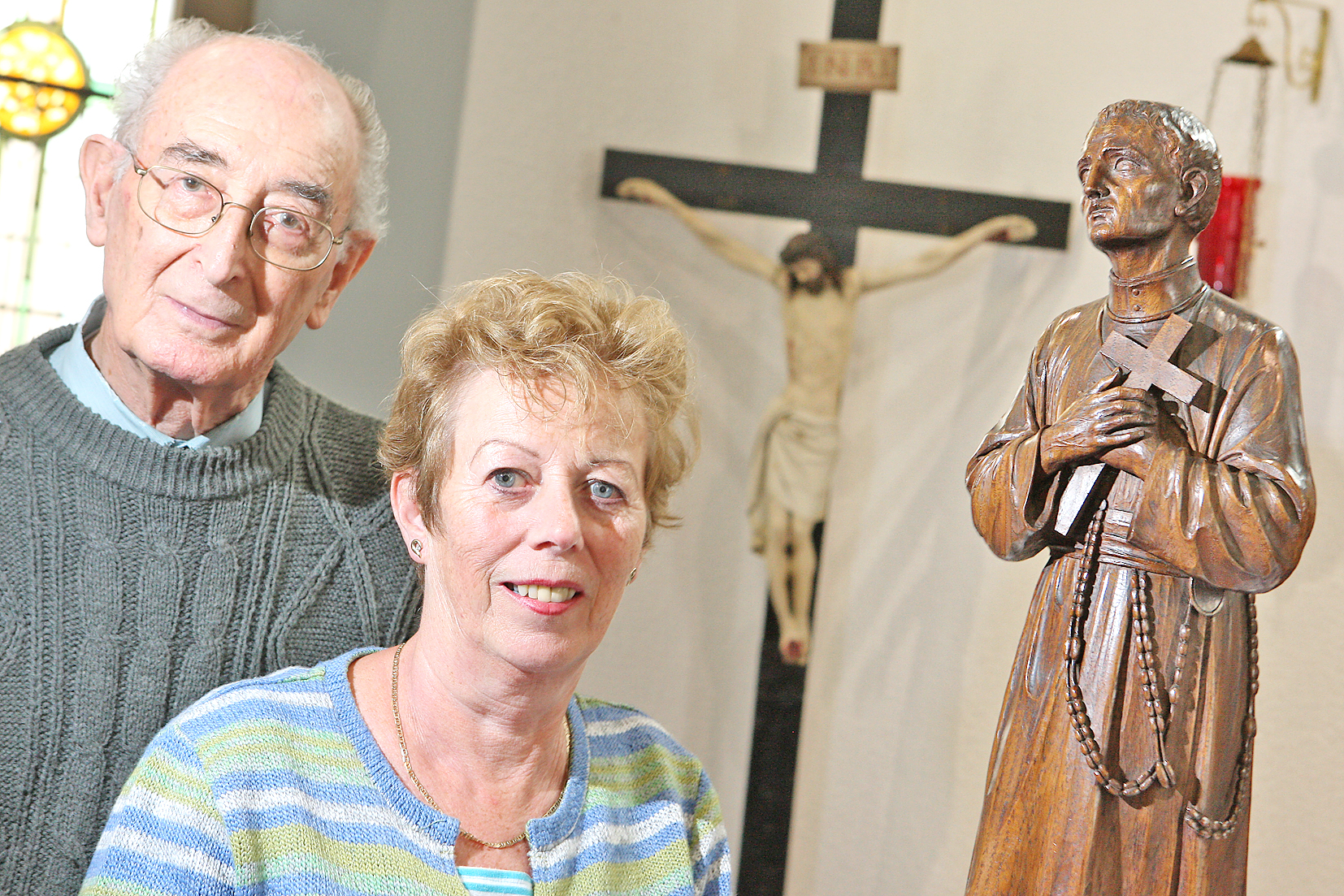 Clonard Redemptorist Fr Sean Moore and Rosemary Doherty beside the beautiful carving of St Gerard Majella, made in Bergen-Belsen

THE fascinating and hidden history of a statue which takes pride of place at the entrance to the Oratory in Clonard Monastery can be revealed today by Daily Belfast.

The carving was made by an inmate of Bergen-Belsen concentration camp, a German Redemptorist priest. The statue of St Gerard Majella was given by the priest to Belfast-born Fr Daniel Cummings who was Chaplain there during World War II. In 1946, Fr Daniel, himself a Redemptorist, returned home with it and the statue has remained at the monastery ever since.

The story came to light when Fr Daniel’s niece, Rosemary Doherty, was planning the launch of her late uncle’s memoirs during Féile an Phobail, as she explained.

“My uncle, Fr Daniel, died in 1977 and I got an old manuscript of his handwritten accounts of all that he had done,” she said. “This year I got it published and the launch was at Clonard during Féile in the summer. I just happened to be speaking to one of the priests, Fr Willie, when he told me about the statue. I couldn’t believe it as it isn’t mentioned in the book at all.

“We are not sure if the carving was done in Belsen itself or in the rehabilitation hospital afterwards as my uncle was there for a year after the war ended, but we do know it was done by a prisoner of war.”

The detailed carving stands around three feet tall and depicts St Gerard with a cross and rosary beads.

“It’s absolutely beautiful,” said Rosemary as we observed the figure this week at its Clonard home. “From the veins in the hands to the hair and the creases in the robes, you can see how much time was spent on it. It is truly beautiful and with such an interesting history too.”

While the statue is in an off-limits part of the monastery all year round, it will be making its annual appearance in the adjoining church next month for the Novena of St Gerard Majella which takes place in mid-October.

A portrait of Fr Cummings pencilled by another Belsen survivor, Hans Baumeister, in 1946 is also in Rosemary’s possession.

Fr Cummings’ book, ‘Rest And Be Thankful: Autobiography Of A Belfast Missionary’, is available to buy now at the monastery.