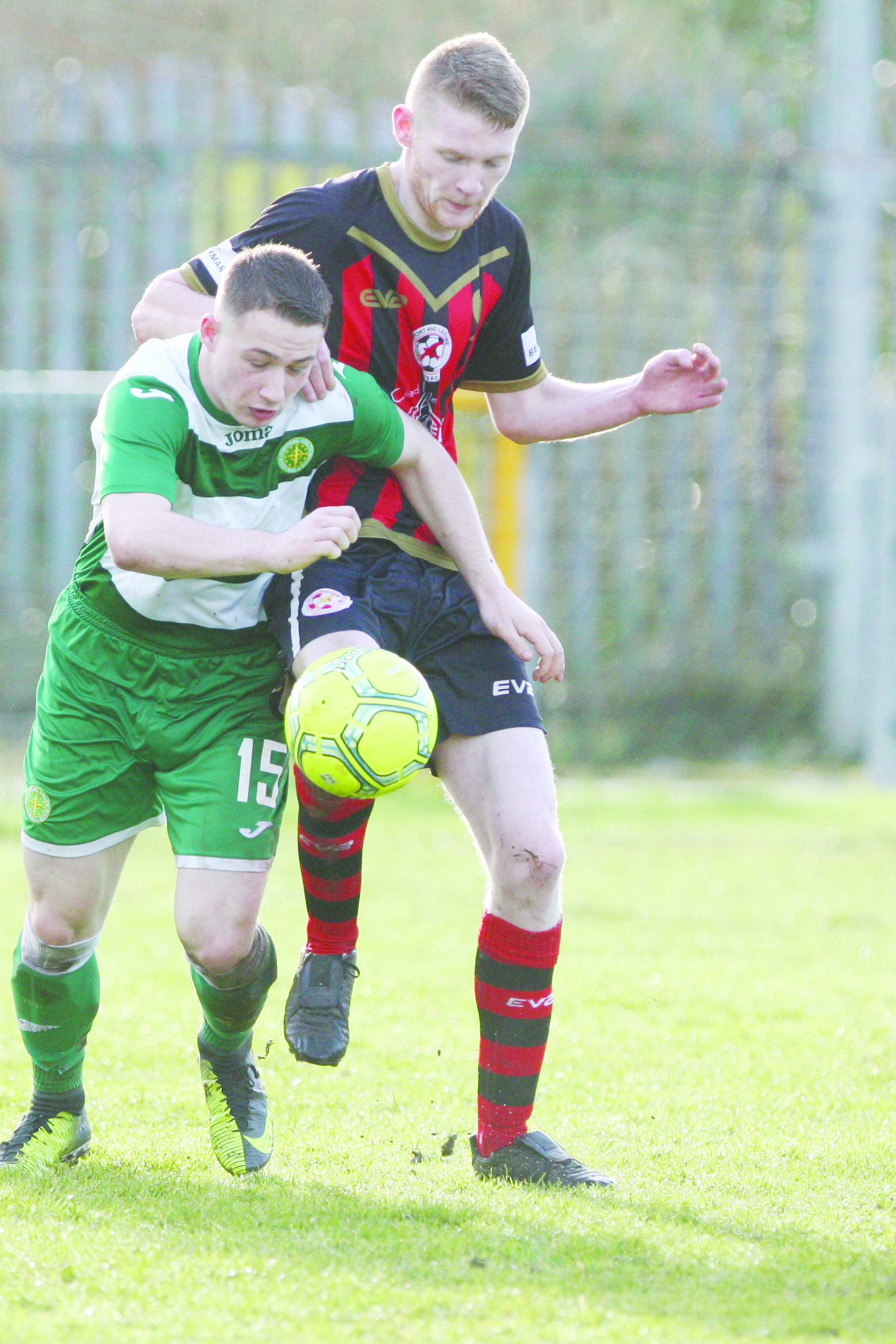 Donegal Celtic’s Paul Ryan in action against Sport and Leisure Swifts. DC will be hoping to return to form when they host Linfield Swifts in the Intermediate Cup on Saturday

DONEGAL Celtic boss Stephen Hatfield has hit out at authorities for the postponement of his side’s Intermediate Cup quarter-final against Linfield Swifts last weekend.

The sides clash this Saturday at Suffolk Road (1.30pm) one week after the IFA informed DC that their game wouldn’t be going ahead as planned after the PSNI expressed security concerns.

With Linfield’s Danske Bank Premiership game at Cliftonville being played last Monday night, a large travelling support was expected at Suffolk Road. In anticipation, Donegal Celtic made the game an all-ticket affair and reduced the capacity but their efforts were in vain as the game was put back by one week, much to the annoyance of Hatfield.

“It was called off for security reason because Linfield firsts had no game,” said Hatfield.

“The powers that be felt it was unsafe to play the game but they feel it is okay to play it on St Patrick’s weekend.

“We did everything we could from making it all-ticket to reducing the tickets, we gave various assurances to get it played.

“We even offered to play it behind closed doors but we were the only party out of the four that wanted the game to go ahead.

“I found the whole process to be very frustrating but those decisions aren’t in my hands.”

While Hatfield would have preferred for the game to go ahead as planned last weekend, the week off proved the silver lining for the DC boss.

Recent league results have been poor and a few days rest gives his embattled side the chance to regroup. Since the turn of the year, the West Belfast side have won just one league game in five and suffered a 5-0 hammering at the hands of league leaders Limavady on their latest outing.

“It is well documented that our last two league results has been a complete disaster for us,” stated Hatfield.

“The free week last Saturday probably didn’t do us any harm.

“It takes the pressure off a bit and, hopefully we will be fresh coming into the cup game.

“It gives us an opportunity to get the show back on the road.

“Linfield Swifts are a very good side and they are having a good season – obviously they have already won the Steel and Sons Cup.

“It won’t be an easy task for us but it will probably be a distraction from the league for us.”

When asked for the reasons for his side’s sudden and sharp loss of form, Hatfield gave a typically honest assessment.

“The Queen’s and Sport and Leisure games were quiet similar,” he said.

“These things happen when teams have fighting for points at the bottom. “In the game itself, against Queen’s we dominated possession.

“We had by far the better chances and they hit us on the counter. Against Sport and Leisure, again, we controlled the majority of the game.

“We had a man sent off and we still went for it. A draw wouldn’t have been a bad result.

“They caught us on the counter and we equalised. We tried to push on and get the win and they hit us again.

“They deserved the win. They came with a gameplan and they frustrated us.

“Looking back on it, we probably should have been happy with a point.”

He added: “Limavady were a class above – their centre forwards were top class.

“We made two very poor mistakes to let them take a two-goal advantage.

“Once they get on top, they were able to pick us off. “Sometimes you have to hold your hands up and say they were too good.”

While DC have lost the lead at the head of the Premier Intermediate standings, their manager remains hopeful that promotion is still within their grasp.

“We have four games before the split and five games after so there is still 27 points to play for,” said Hatfield.

“We have given ourselves a bit of a mountain to climb in terms of winning the league but we are pushing to try and get that second play-off place.”

Hatfield will be without the services of the suspended Kevin Hughes for Saturday’s clash with Linfield Swifts while both Artur Kopyt and Matthew McCafferty remain sidelined through injury.