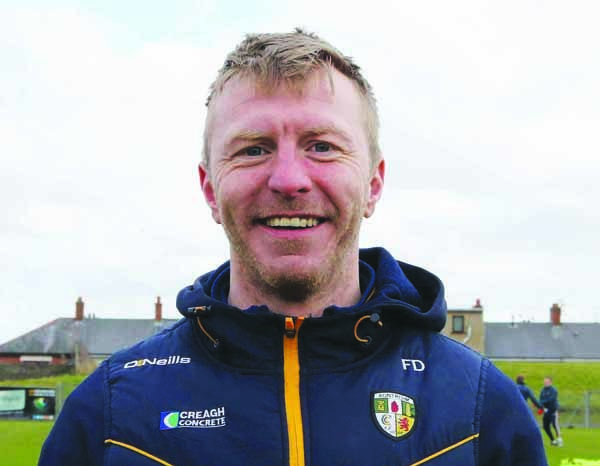 ANTRIM football trainer Fionntan Devlin feels the GAA has a duty of a care to ensure that players are looked after both mentally and physically during the ongoing Covid-19 crisis.

As with all sporting organisations, the GAA has suspended activity until Sunday, April 19 and it seems likely there will be a further extension for the remainder of the month at the very least.

With no games, pitch sessions or gym work to do, GAA players have been coming to terms with a sudden and dramatic change in their lifestyle. In a strictly sporting sense, removing what is a such an integral part of people’s lives is something which must be managed properly and Antrim have taken measures to ensure they are doing their bit.

Devlin, who devised individual training programmes for the Antrim footballers, says that the stress and anxiety caused by the pandemic will have to be considered as much as the physical training of the team.

“When you look at everything that’s happening, sport and football is secondary at the moment,” said Devlin.

“For the players, they are very aware for how serious it is and they know they have to adhere to social distancing and working as individuals as opposed to coming together as a group.

“Our players have been working on their own programmes and they are taking every precaution they can. You can see what our boys are like on social media – they are role models. You know when you are giving them a programme to work on they are following it.

“We are trying to keep in contact with the players and, without the groups, boys are talking to each other through social media and Whatsapp and through conference calls. We have to make sure the players are linked into the group and still have a focus on what we are trying to so. They do thrive in structure and that’s the good thing about the GAA.

He added: “From a mental health capacity, there are some serious concerns there. There is a level of confinement for people who are used to a totally different lifestyle.

“It isn’t an easy one to manage and perhaps the people who are involved in sport and can carry on are the more fortunate ones.

“When you see people having to work from home and people being out of work, you realise that some of the GAA players are maybe in a privileged position in that they have something to focus on.”

Insight
Devlin also gave an insight into what the Antrim players have been working on in recent weeks as their league campaign came to a shuddering halt.

With five games of their Division Four campaign gone, Antrim were well-placed to challenge for promotion.

At this stage of the season, the vast majority of strength and conditioning work would have been completed. In a regular season, injury management and recovery becomes the primary focus at this time. However, teams are almost going back into pre-season mode with the campaign on hold.

Devlin says managing individual workloads for the Antrim players has been a challenge as every player will have their own requirements and limitations in terms of space and equipment.

“It isn’t without its challenges and some players might have to deal with a lack of facilities or a lack of space so you have to be creative in terms of what you can set them,” said Devlin.

“Some players will have equipment and you can tailor a programme to their needs. Generally, you are giving them things which they can nearly do in their own back yard and in their home.

“The latest advice still allows people to exercise outside once a day and that’s very useful for people both physically and mentally.

“A lot of inter-county players and most clubs players will be doing something every day anyway either in terms of their physical development or their recovery. When you look at it now from going from that level of activity to inactivity must be difficult mentally as well as physically.

“The programme we are rolling out is trying to mirror the workloads we have been doing in training. If their GPS is saying they are covering a certain sprint distance in training, you are trying to get them to mirror that in running blocks and sprint and speed development work.

“Some of the city-based lads might not have that outside space whereas someone in the country might have a larger area to work with. Some players might have gym equipment so we tailor the programmes based on what the players have available.

“At this time of the season, you’d usually be doing a lot of speed and strength maintenance work. In between league and Championship, you usually have a chance to revisit your pre-season speed and strength development work. We are nearly trying to go back to that stage of development work again. All the counties are in the same position so nobody is at an advantage or a disadvantage in that regard.”

The Antrim coach has also urged club players and underage players to use this time to work on their skills at home in whatever way they can.

Social media has been awash with clips of various teams doing and setting challenges in recent weeks and Devlin believes any training, no matter how small, can benefit players.

“There have been some great challenges doing the rounds on social media to keep people motivated,” added the Loup native.

“Certainly, people can work on passing with their weak hand, weak foot – small skill sets that they mightn’t have the chance to focus on.

“It is not only the children, but right the way through to senior. Sometimes the basic skills are neglected through the likes of tactics and conditioning and everything else. It is a good time to focus on those skill sets. You’ll hopefully see the benefit of that when games do resume.”

Resume
As to when things might resume is anyone’s guess and various commentators and pundits have offered their views on how a revised and condensed GAA season might look like.

A number of people had floated the idea of a return to a knock-out format for this summer’s Championship, but that idea was firmly rejected by the Ulster GAA secretary Brian McAvoy earlier this week. However, Devlin added his voice to those calling for a knock-out Championship, albeit the Derry man has his own take on what format it could take.

“There will come a time when the GAA will have to look at how the season will look in terms of structure. There are certainly some very creative ideas floating about,” stated Devlin.

“We’ve seen the likes of Paddy Tally (Down manager) giving their views. Being involved with Antrim, I’d like to see the league concluded. That would give two or three games as a warm-up for the Championship. I like the idea of a straight knock-out for the Championship and place the provincial Championships on hold.

“We are talking strictly in terms of the county season, but you’ve club players who have invested a lot of time and effort into preparing for their season and that hasn’t even started yet for most teams. Any change has to leave time for some form of a club campaign as well. When things do resume, there’ll be a real buzz and sense of enthusiasm for our games.”

Certainly, Antrim appeared to be on an upward trajectory at the beginning of March before all GAA activity stopped.

Sitting second in Division Four, the Saffrons would be assured of promotion with wins in their final two games against Wicklow and Waterford.

In their last outing against Limerick, Antrim delivered their finest performance of the season to defeat the Treatymen 2-21 to 1-12 in Portglenone and Devlin feels the players had been building towards that kind of display in previous rounds.

“The lads have kept the heads down and they were just taking in game-by-game. They’ve always believed they could improve on some of their earlier performances in the league,” said Devlin.

“It was a case of keep working away and keep believing in the process and the performance will come.

“In terms of the Limerick performance, there were probably segments of that play in our previous games, but it just didn’t come together as well as it did against Limerick. That’s football – some days things come together better for you than others.

“Right across the panel and every county team is the same, there’s a sense of disappointment that they haven’t got a chance to express the efforts they’ve put in, but now the boys understand how sensible that call was.

“Everyone is hopeful that things will resume and the leagues will be finished. When the GAA called a halt to all activity, and in hindsight that looks like a very smart move and they deserve immense credit for it.”

Impacted
While every county panel in all codes of the Association are impacted in the same manner, talk of declaring the leagues ‘null and void’ and giving the season over to club games won’t sit well with a number of player, least of all the likes of Paddy Cunningham and Michael McCann, who returned to the county fold this season.

Indeed, it was the decision of the Antrim management to condense their training schedule which helped coax both men back to the county squad.

The Antrim footballers now do gym work before pitch sessions to allow players more down time and Devlin believes it was the right call to make for the benefit of the team.

“For the boys, the condensing of night certainly suited the older players who have family and work commitments and it would have left it difficult to join up with the country in previous years,” stated Devlin.

“At this stage, it suits a lot of players in the group. Training sessions are condensed and they are doing a more sustained session when they are there and it gives them maybe that extra night of freedom to do a recovery session on their way or have a night out with the family.

“The guys like Paddy (Cunningham) and Michael (McCann) have been great coming back in, not only because they’ve experience, but also because they’ve a motivation to try and move the thing forward.

“The demands of an inter-county GAA player can be exhaustive and, if we can alleviate some of that from them, then it becomes more appealing. As a management group, that was our thought process, but all of these things are judged on success. Whether it was the right decision or the wrong decision will be viewed by the results at the end of the season.”

When the 2020 season will end or when it will resume isn’t unclear right now. For the time being, the Antrim footballers, with Devlin’s help, must try and keep themselves ticking over in the hope they’ll be given a chance to clinch that coveted promotion berth when football returns to being their main focus.