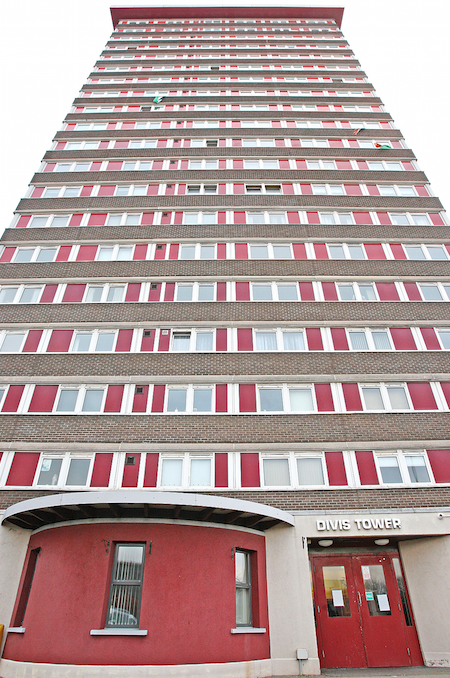 A WEST Belfast MLA has claimed that elderly residents living in Divis Tower have been reduced to tears because of their living conditions.
Sinn Féin’s Fra McCann made the claim in a letter to the Housing Executive. This week he joined a protest alongside the Falls Residents’ Association at the Housing Executive headquarters in Belfast to highlight the conditions faced by residents who live in Divis.
Mr McCann handed in a letter to the Housing Executive expressing his concerns that “residents have been left to cope with terrible conditions, particularly during the winter months, with no timeline laid out for work to resolve some of these issues”.
His letter states: “I appreciate that there is a tower blocks strategy. I also understand that this process is in the hands of the Board. The problem I have with the process is the suffering of the residents. They come up against delay after delay, promise after promise and are being told that their plight is being taken seriously. These tenants have had to endure freezing conditions; in many cases sitting with blankets and coats wrapped around them to try to get some heat and comfort.
“I have been informed about older people crying in their homes because of the conditions. I realise that heaters were provided some months ago but this in no way protects people from the cold and an uncomfortable existence in their home. Many of these tenants suffer from illness which is being exacerbated by the conditions in Divis Tower.”
Speaking to the Andersonstown News the West Belfast MLA said: “These residents have been campaigning for decent accommodation and to have necessary works carried out for a number years now. They have been left to cope with terrible conditions, particularly during the winter months where residents have sat with blankets and coats wrapped around them to try to get some heat and comfort.”
Mr McCann continued: “I spoke with the Chair of the Housing Executive Board and stressed to him the need for investment in Divis Tower to deal with the serious problems faced by residents.
“He informed me that Divis Tower will be dealt with at this morning’s Board meeting as will the other tower blocks owned by the Housing Executive.
“I have also advised him that the Divis residents will wait and study the outcome of the boards suggestions before deciding on what actions they will take in terms of future protests.”
A Housing Executive spokesperson said: “Since 2015, the Housing Executive has been reviewing the condition of all of our housing stock in order to plan what investment is required in the future.
“On 30 May 2018 the Board of the Housing Executive considered a plan regarding the future of each of the 33 tower blocks that we currently own.
“The health, safety and comfort of our tenants is our priority, however, our tower blocks are now reaching an age at which significant investment is required – over £300million over the next 30 years – to ensure they are of a decent standard.
“The approach that has been agreed by the Board is to consult with residents, political representatives and the wider community about future plans for each of the tower blocks and surrounding neighbourhoods.
“This includes the decommissioning of tower blocks over an agreed extended time period and further exploration of future housing options available at each location.
“Once these plans have been developed, we will seek business case approvals from the relevant government departments.
“In the meantime, we will continue to maintain all our tower blocks and ensure health and safety and other work is carried out as required.”