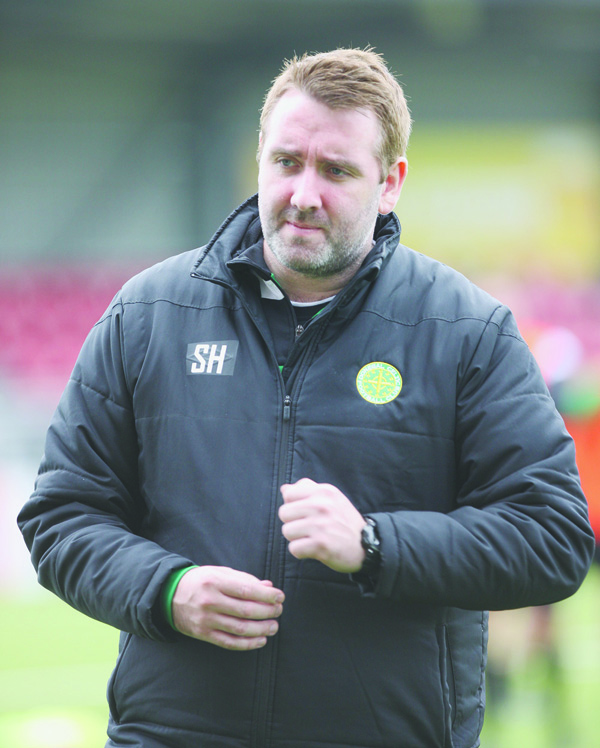 DESPITE facing the prospect of being at the foot of the table if results don’t go favourably over the next week, Donegal Celtic manager Stephen Hatfield insists he isn’t concerned by his side’s erratic form this season.

On that occasion, the Portadown outfit came away with a much-needed 3-2 victory and Hatfield admits it is slightly unusual to be facing the same opposition this weekend.

“It is slightly unusual but it is just the way the re-fixture fell,” said Hatfield.

“We have to play everybody twice before the split anyway. I suppose it gives us a good chance to put right the wrongs from last weekend. We were extremely disappointed with the result. I think we had the majority of possession and we were camped in their half for the majority of the game.

“That has been pleasing in one sense, that we are creating periods of dominance. On the other hand, the Armagh game followed a similar pattern and we had so much possession, but didn’t create enough clear-cut chances and teams are hitting us on the break. That is a big issue for us at the minute, but it would be a bigger issue if we were being outplayed. We are just lacking that bit of quality in the final third. Once we get that right, we’ll pick up a lot more points over the next few weeks.”

DC’s inconsistent form is illustrated by their three league results so far in 2018.

After losing 1-0 to Armagh at Holm Park, Hatfield’s men produced a fine display to see off Moyola Park 3-2 at home.
However, one week later, that scoreline was reversed as they lost out to Annagh. Yet, the DC boss insists his side’s performances have been better in recent weeks and believes a few minor tweaks will yield more victories.

“Over the last few weeks, our performances have been good,” said Hatfield.

“I think back in September and October, we lost games and we could have no complaints about the results. We were playing seven or eight players who were U20 and that will always catch up to you. It might be a bit of a cliché, but we just need to tighten things up at the back and be a bit more clinical in the final third.

“It comes down to small differences, but football at this level is decided by small margins.”

One reason why Hatfield remains calm despite his side’s precarious league position is the influx of fresh talent at Donegal Celtic Park.

The injection of so many new players could be the difference in the ‘Wee Hoops’ moving clear of the relegation zone – something Hatfield wants to happen sooner rather than later.

“The teams at the top of the league (Dundela) have just four wins more than the team at the bottom (Annagh). I think in any league, that is quite incredible. It is just about trying to put a good run together which would see you move into the top half of the table.

“After what happened last week, we will be keen to move out of the relegation zone as quickly as possible. Hopefully we can be in the top half of the table by the end of March. It is probably too late to be doing anything at the top of the table, but we want to finish the season strongly to give us a platform for next season.”

Apart from defender, Noel Healy who is suspended, Hatfield has a full squad to pick from for Saturday’s trip to Portadown.