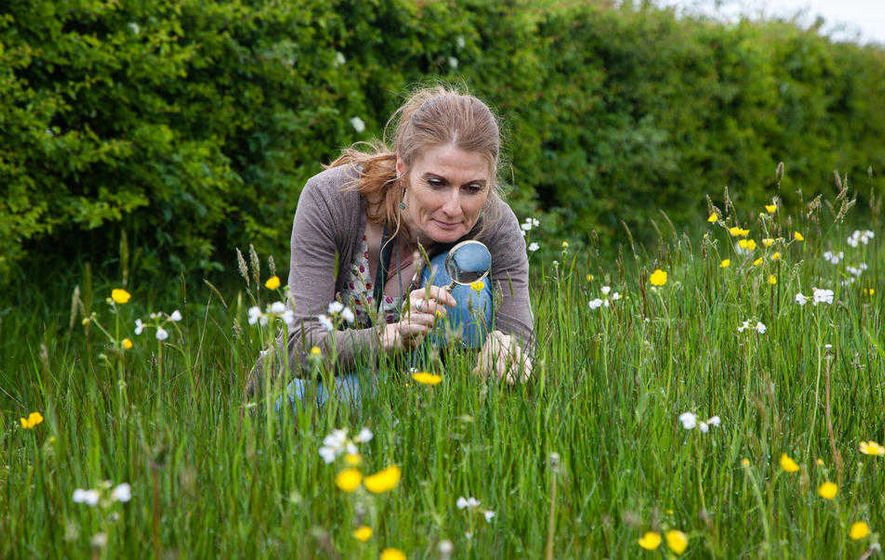 IN HER ELEMENT: Donna Rainey is in the vanguard of rewilding

And so nature-lover Donna – a nurse in Causeway Hospital in Coleraine – decided to put her money where her mouth is and actually buy some of the land she loves.

“I paid off my mortgage a while ago and I’m going to save the money I used for mortgage payments to buy land and give it over to nature,” she said.

Last month she was able to acquire three acres that are close to her heart – a wildflower meadow near her home in Garvagh, Co Derry.

“I’ve walked here for 20 years, it’s a beautiful meadow with the most amazing display of devil’s bit scabious, a wildlife haven,” she said. “I spoke to the owner and since he doesn’t use it and sees no value in it he agreed to sell it to me.

“I can’t believe I’ll now be able to look after this place and ensure it is never destroyed. So, so happy!”

Donna is among a growing number of people hoping to bypass officialdom and create a mosaic of mini-nature reserves all over the country, a patchwork of life in a country which has become, in Donna’s own words, a “green desert”.

“Every wee wet corner or wet meadow is being drained by farmers,” she said. “Nature is being obliterated everywhere.”

A friend of Donna’s has just bought 10 acres of bogland - a precious habitat that successive Irish governments allowed to be destroyed for peat until Europe finally stepped in. Bog is among the cheapest land – around £1,000 an acre – and it’s a sad indictment that environmentalists believe that buying it is the only way of ensuring what’s left won’t be destroyed.

Donna added: “This week I was contacted by a professor in Dublin who wanted to rewild six acres of land he had. It’s really taking off.

“There’s a hillside near me which is brilliant for wild flowers. It’s so beautiful and it was put up for sale but well beyond my means. But when there were no buyers they ripped out all the hedgerows and trees and turned it into a cattle farm. It’s now a green desert.”

Donna, who is originally from Loughguile, County Antrim, spends every free moment in the outdoors, walking our meadows, woodlands, beaches and hilltops.

“On our family farm in Loughguile there were five acres which were used for silage, they had been sprayed so many times. Then five years ago I took over and managed it for wildlife and this year there were thousands of orchids. I was going to cry with happiness.”

Donna’s example has spurred a group of local bird lovers to start a GoFundMe page to collect money to buy land in the outskirts of West Belfast where curlews could breed in safety.

The curlew – crotach in Irish – used to breed all over the Belfast Hills, but in the last few decades they’ve been squeezed out by agriculture. This bird could be extinct from Ireland as a breeding species in a matter of years.

It seems that, for many environmentalists, it’s time to take things into their own hands.

If you’ve seen or photographed anything interesting, you can text Dúlra on 7801 414804.