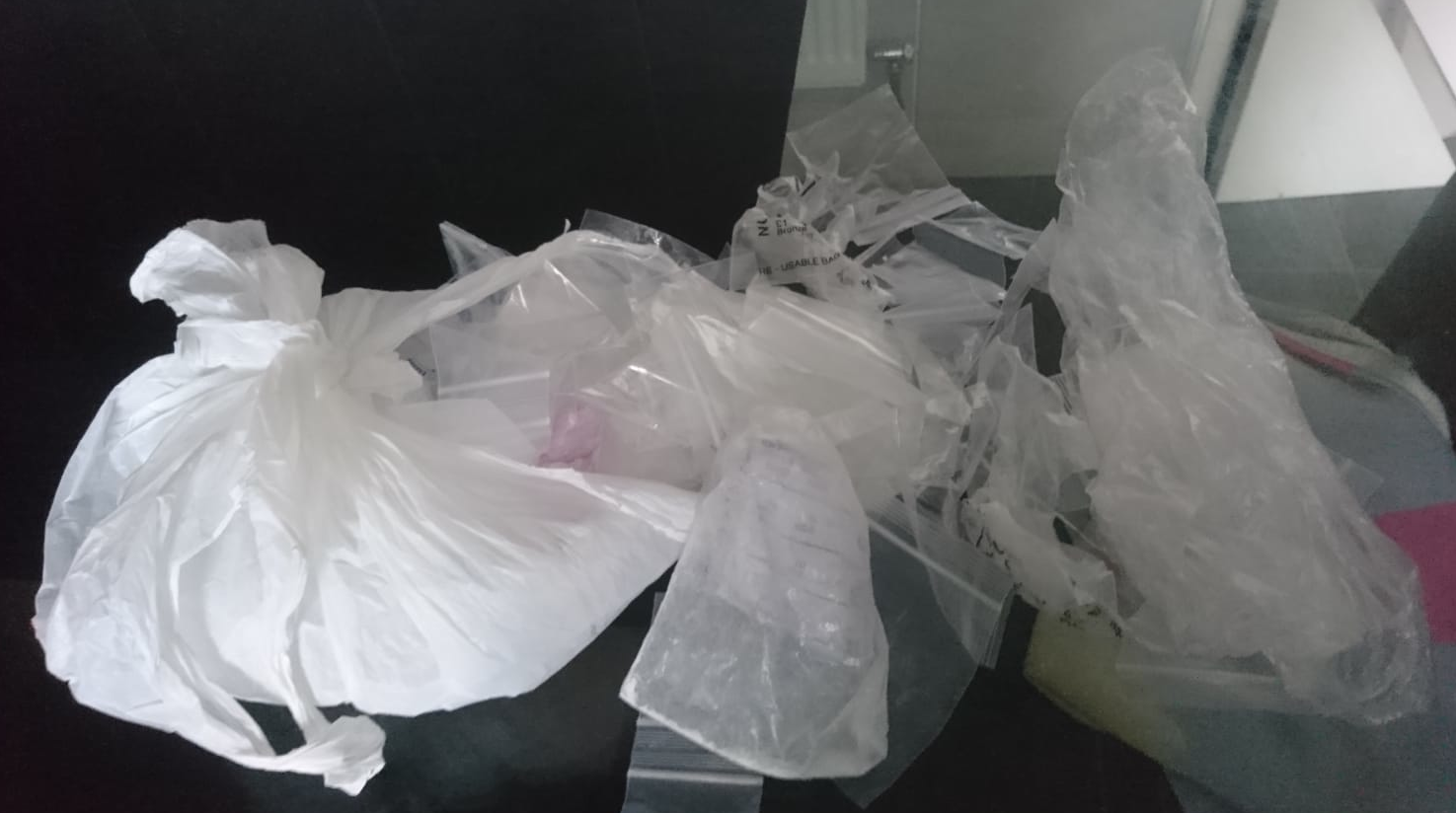 FIND: The large amount of drugs destroyed by the IRSP – several other bags that had formerly contained drugs can also be seen

THE FATHER of a Belfast teen whose son was threatened and forced to store a large quantity of drugs for a local criminal gang has spoken to the Andersonstown News about his family’s ordeal.

We’ve learned that several young people from the lower Falls/Divis/Grosvenor area have also been threatened by the same drugs gang and forced to store drugs against their will.

In recent days, the IRSP was approached for assistance and advice by several distressed parents within the area who had become aware of the involvement of their children in the drugs trade in West Belfast.
Parents in at least seven families have discovered that their children – aged from late teens to early twenties – have been recruited through threats and/or the wiping of drug debts to store large amounts of high grade cocaine in their homes unknown to their parents, from which it was being retrieved by local dealers for cutting and distribution on the streets.

Having become aware of the extent of the problem through a series of discoveries, tough questions and frank conversations with their sons, the parents concerned made contact with local IRSP activists to tell them of a danger that was spiralling beyond their control.

The IRSP told us that after confirming that the young people involved were living in fear and debt, they spoke to those involved assuring them of their support and encouraging them to break the cycle of supply while raising public awareness of the extent of the problem.

In the presence of IRSP members, drugs in their homes were destroyed on camera. Still photographs and a video were given to us by the IRSP as well as the names of two leading figures in the drugs gang that used and exploited local families.

The worried father, who wishes to remain anonymous, told us: “His mummy was cleaning his room on Saturday night, she was putting stuff in his wardrobe when she came across a large bag containing white powder. As she was lifting it out the stuff went all over the bedroom, he shares a room with his brother, she was in total shock, she couldn’t believe it. He has never brought trouble to our door or been in any kind of trouble in his life, he’s a good kid, this is not like him.

“When I found out I was devastated, we are still in shock, I never thought he would do something like this, to be totally honest I didn’t know what it was but I knew it was drugs because there was a bag of white stuff among it. It’s crazy to think that my son was storing this stuff, this could have ended very badly, there are other kids in the house.”

The worried father spoke to his son to find the truth.

“I’ve been questioning him for the past few days, but he’s just shut down, he has gone completely into himself and is refusing to tell us, we are worried sick about him. He won’t tell me who the stuff belongs to. I took his phone from him and texted people telling them to stay away from my son and that I had put the stuff down the toilet.

“He has promised us that this stuff was only in the house a matter of days before his mummy found it. I’m furious that this stuff was in our house, he could have gone to jail for a very long time. He is so down now, we are having to constantly keep an eye on him. I told him he has to come to me straight away if these people try to contact him again.”

Asked what he would say to those who are threatening kids, he said: “Stop it now, before it’s too late. Some poor child could die or take their lives out of fear. An innocent child could be put behind bars for years because they have been forced to keep this stuff, leave our kids alone.

“I contacted the IRSP on Saturday night and asked them to come and get this stuff out of my house and to dispose of it. The people down here have absolutely no trust in the PSNI, the best thing for me to do was to go and see the IRSP and ask them to deal with it. I hope this stops, because I don’t want another family going through what we are going through now.”

Gerry Foster of the IRSP said “These families should be commended loudly for breaking the silence, defying the fear and basically doing the right thing. By their own intervention and by seeking help they have broken a significant chain of supply of hard drugs in the lower Falls. They may well now feel vulnerable to the pushers whose nefarious income has been disrupted, but they can be sure of the steadfast support of the IRSP from here on, indeed we would encourage the whole community to rally behind these families and against the few social parasites who preyed upon them. Any other persons in a similar predicament should feel free to approach the IRSP in full confidence of anonymity and impartiality.”­