Drugs warning ahead of Belsonic 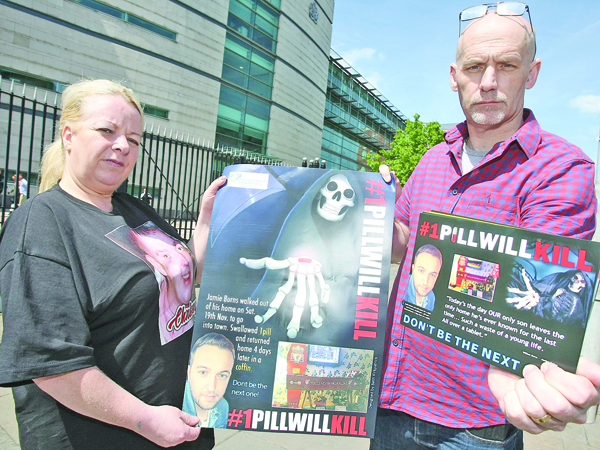 A LOCAL drugs campaigner has raised his concerns ahead of another huge Belsonic concert in Belfast tonight (Friday).
Last Friday, a train full of young people heading to the Ben Nicky concert was stopped at Mossley West train station when it became apparent many teenagers on board were drunk and high on drugs. One distressing online video this week showed a young reveller in a state of extreme distress due to drugs.
World-renowned DJ Tiesto will play a set in front of an estimated 10,000 people at Ormeau Park tonight. William Burns, whose son Jamie (23) died in hospital after taking one ecstasy tablet on a night out at Queen’s University Students Union in November 2016, said he hopes last Friday’s scenes at Mossley will not be repeated.
William setting up the #1PILLWILLKILL campaign after his son’s death.
“A ten minute journey from Carrick to Mossley took 40 minutes because the train had to keep stopping,” he said. “There was that many people on it. It was eventually stopped when it became apparent the train was full of teenagers, many of whom were drunk and/or high on drugs.
“I understand it was absolute chaos at Mossley station. Young people were blocked and/or off their faces on drugs
“A lot of kids were standing about. There was not enough buses to get them to the concert.
“On Saturday morning when I woke up, I had three nurses message me to say there was an emergency plan put in place.
“Stage one was called – that is when there is a threat of mass casualties. Doctors and nurses were called and put on standby.
“Stage two thankfully did not happen when casualties are brought to hospital and treated. It went from stage one to three.
“I received hundreds of messages from people telling me the same thing about the chaos at Mossley. Why would so many people say the same thing if it wasn’t true?
“It is only a matter of time before somebody will die. Masses of young people will descend on Belfast for the Tiesto concert this Friday night.
“These 16 and over concerts are notorious for underage drinking and drug use.
“People need to realise that there is a major drugs problem in Belfast instead of denying it.”
Regarding last Friday night’s situation at Mossley West station, a spokesperson for Northern Ireland Ambulance Service said: "Hundreds of kids were taken off the train at New Mossley for being drunk and disordely.
"We treated four children. Three were discharged at the scene and one was taken to the Mater Hospital."