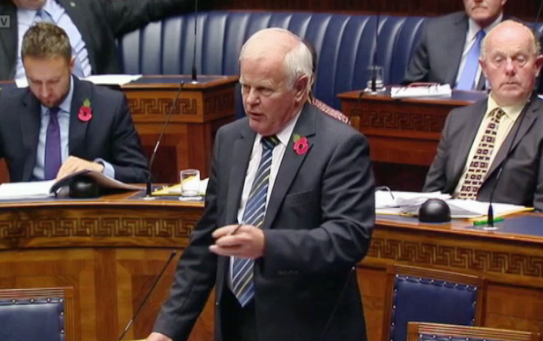 THE embattled DUP has come in for more withering criticism both at home and abroad after it used a petition of concern to block yesterday’s historic Stormont vote in favour of same-sex marriage.

105 MLAs voted yesterday, with 53 voting in favour of same-sex marriage and 52 voting against. A change of heart by members of the SDLP and Alliance proved decisive, although once again the SDLP’s Alban Maginness did not turn up for the vote. Just one MLA abstained – UUP leader Mike Nesbitt, who in recent days has been making a series of seemingly contradictory interventions on the issue. He warned his party at its annual conference last week that they risked ending up on “the wrong side of history” if they continued to oppose same-sex marriage, but later said he wouldn’t be changing his mind to vote in favour.

Yesterday he entered both the Aye and No lobbies to spoil his vote, as Assembly rules contain no facility for members to abstain.

It was the fifth time that the Assembly has voted on the subject, with the main unionist parties growing increasingly irritated this time around by the latest debate, arguing that the four earlier votes against had put the issue to rest. But the persistence of the yes lobby paid off yesterday, securing a vote in favour of same-sex marriage which, while negated by the DUP’s manoeuvre, has been a massive morale boost for the LGBT community and their supporters.

It’s been a tempestuous few months for the DUP, which has emerged a poor second in its row with the UUP after the murder of Kevin McGuigan in the Short Strand in August. The party was badly wrong-footed by Mike Nesbitt’s decision to withdraw his minister from the Executive and the DUP’s subsequent in-out ministerial policy was widely derided. The appointment last week of unelected co-optee MLA Emma Pengelly as a junior minister provoked a torrent of negative headlines not only about her lack of votes, but about her salary and hefty severance payment. The decision to void the same-sex marriage vote with a petition of concern – ironically a technical tool designed to bolster equality and protect minorities – has seen the DUP come in for another round of heavy criticism.

“The result of the vote today is an important symbolic victory. The majority of MLAs voted in favour of this motion,” he said. “Sinn Féin has shown leadership on this issue and a number of councils in the north have supported marriage equality. However, I am disappointed with the ultimate outcome of what was such a positive result. I believe the DUP’s use of the petition of concern in this instance amounts to an abuse of process.

“I would appeal to the DUP to respect the wishes of the majority. We have reached a new dawn in Ireland with the monumental result on May 23rd in the south in support of marriage equality.”

Patrick Corrigan of Amnesty International said: “The abuse of the petition of concern, to hold back rather than uphold the rights of a minority group, means that Stormont has once again failed to keep pace with equality legislation elsewhere in the UK and Ireland.

“The battle for equality will now move to the courts, where same-sex couples have been forced to go to secure their rights as equal citizens in this country.”

“The abuse of the petition of concern by the DUP in this way is wrong and it cannot continue,” said the Derry MLA. “These institutions must be reformed so that no party can pervert such a critical instrument for protecting minority communities.”

“Whilst this is the first time that a majority of MLAs have voted in favour of same sex marriage, many people are notably quick to dismiss the other four occasions that a majority rejected this same proposal,” said the North Down MLA. “It is for those whose position has changed to outline how the arguments have altered their view.”