Excitement ahead of Pope visit 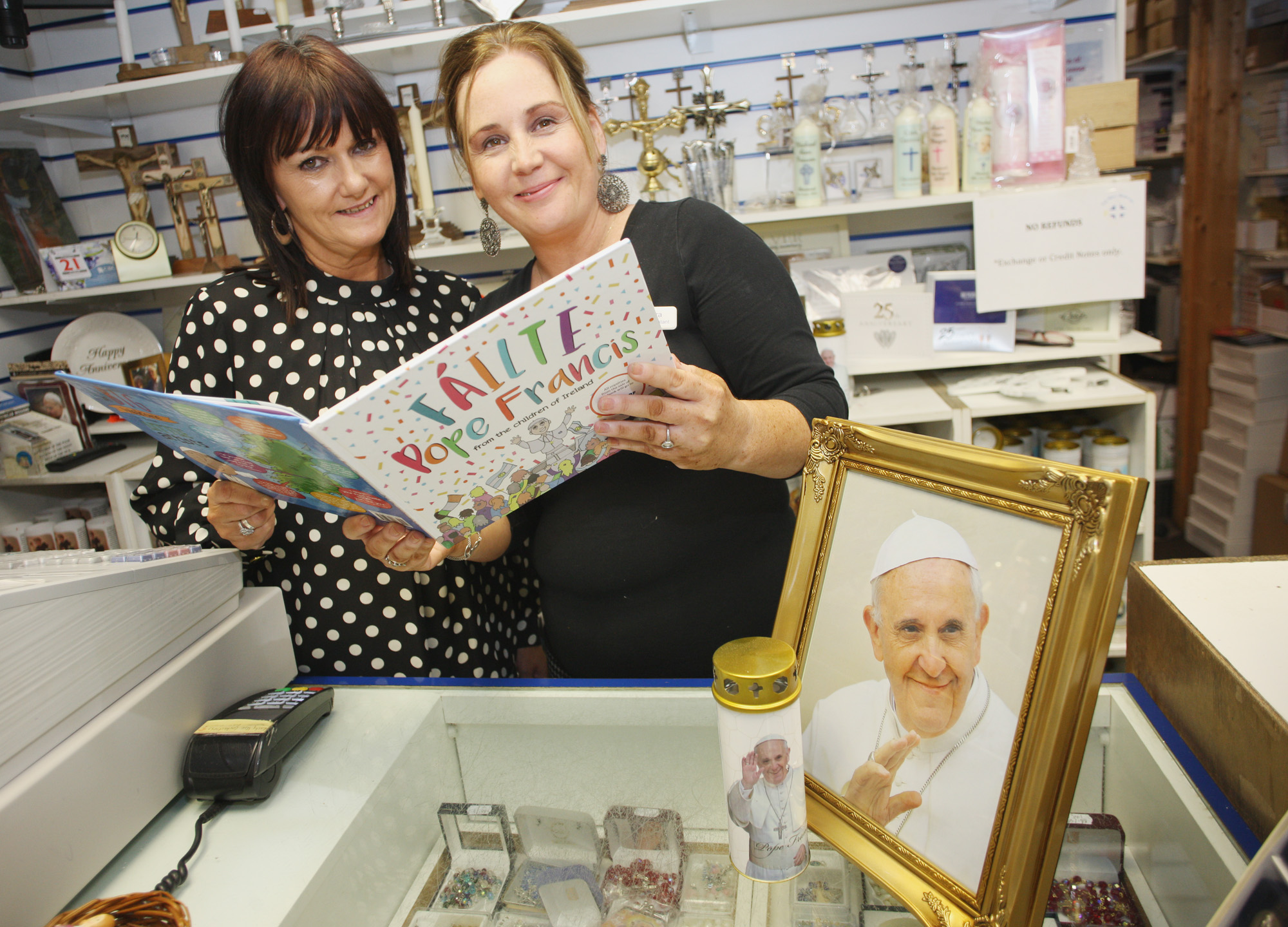 Teresa Nolan and Maura McShane in the the Holy Shop, Chapel Lane

CATHOLIC churches around the city are bedecked with bunting and Papal flags as excitement builds ahead of the historic visit from the Holy Father Pope Francis to Ireland this weekend.
The momentous visit is being held to mark the World Meeting of Families (WMOF), staged every three years for families to celebrate, pray and reflect together. This is the first time the event has been staged in Ireland.
Pope Francis will arrive in Dublin on Saturday, almost 40 years since Pope John Paul II came and addressed the faithful at capacity Masses in Drogheda, Knock and Phoenix Park. Pope Francis’ first engagement will be meeting President Michael D Higgins before visiting St Mary’s Pro-Cathedral and then the Capuchin Day Centre, which provides hot meals, clothing and showers for the city’s homeless. Pope Francis will then preside at the Festival of Families in Croke Park.
His visit will conclude on Sunday with a closing Mass at Phoenix Park. An estimated 500,000 people are expected to attend with thousands more watching the live footage from around the world.
Rector of Clonard Monastery Fr Noel Kehoe said that the parish is running a bus to the weekend events in Dublin “on Friday” and that he will be staying “to attend both the festival of Families and attend the Papal Mass”.
Parish Manager at St Oliver Plunkett Parish Glen Phillips told the Andersonstown News that Pope Francis’ visit had created “such a buzz within the parish”.
“We have a coach leaving tomorrow (Thursday) so that parishioners can attend the WMOF Congress in the RDS.
“A number of families from the parish will also be attending the Festival of Families in Croke Park on Saturday and we are also running a coach to the Papal Mass in Phoenix Park on Sunday.
“There is such a buzz around the parish as the Papal visit approaches. Many older parishioners remember Pope John Paul II’s visit and many young parishioners were brought up on stories about it. Pope Francis is re-invigorating the Church and many parishioners want to be part of that and show support for him,” he said.
St John’s Church was proudly displaying its bunting and Papal flags as parishioners filed out from Mass on Wednesday morning. Parish Manager Conor Neeson explained how some of the decorations had stood the test of time and dated back to John Paul II’s visit.
“We will have a number of buses on from Friday morning taking parishioners down to Dublin for the Pope’s visit. As part of the Falls Road Pastoral Community, parishioners from Corpus Christi, St John’s, St Mary’s, St Paul’s and St Peter’s Cathedral will all be travelling this weekend. There is a great sense of occasion and I’ll be staying behind to organise the parish hall for the Mass on Sunday as we will be screening it live,” he said.
Chair of the Pastoral Council Annette Hinchcliffe said she will be attending the Mass along with her teenage children and had also been part of history when she travelled down on the train to see John Paul II say Mass in 1979.
“Many of our elderly population in the parish would have loved to have attended the Mass on Sunday but a lot of the instructions about once people get off their buses is the walk to Phoenix Park which is a possible three miles. We thought it would be nice to bring everyone together to give them a flavour of the day so that they wouldn’t just be watching it in the house. Our parishioners will have an opportunity to come to the parish centre to watch the Mass and be with the other people in their parish,” she said.
Parishioner Frances McEvoy told us: “I’m going down today (Wednesday) for the different discussions and events that are taking place over the next couple of days each day ending with a Mass and I’m looking forward to enjoying the weekend celebrations as well.
“I was in Phoenix Park whenever John Paul II came and I think this Pope has the same charisma. I think he will be very welcomed despite all that is going on at the minute.
“It’s very exciting. I was in Rome before Christmas staying with friends and I was at one of his meetings, when he meets the people on a Wednesday. The atmosphere when he walks in is just incredible. There is definitely something about him. I think despite in terms of some of the negative publicly there has been around the visit he will speak to the people and he speaks from his heart,” she said.
At an extremely busy The Holy Shop in city centre’s Chapel Lane sales assistants Maura McShane and Teresa Nolan told us how there had been “great interest” in their Pope Francis memorabilia ahead of the highly anticipated visit.
“We have rosary beads, candles, framed photos of Pope Francis and prayer cards all to mark his visit for the World Meeting of Families,” explained Teresa. “He is a very popular Pope and the amount of our customers going this weekend to see him is unreal,” she said.
Maura said that many people were calling in since staff created their window display and there was a real “excitement” with people ahead of the weekend.