EYE ON THE PAST: Double funeral for Belfast Celtic legend Jackie Vernon and wife Jean 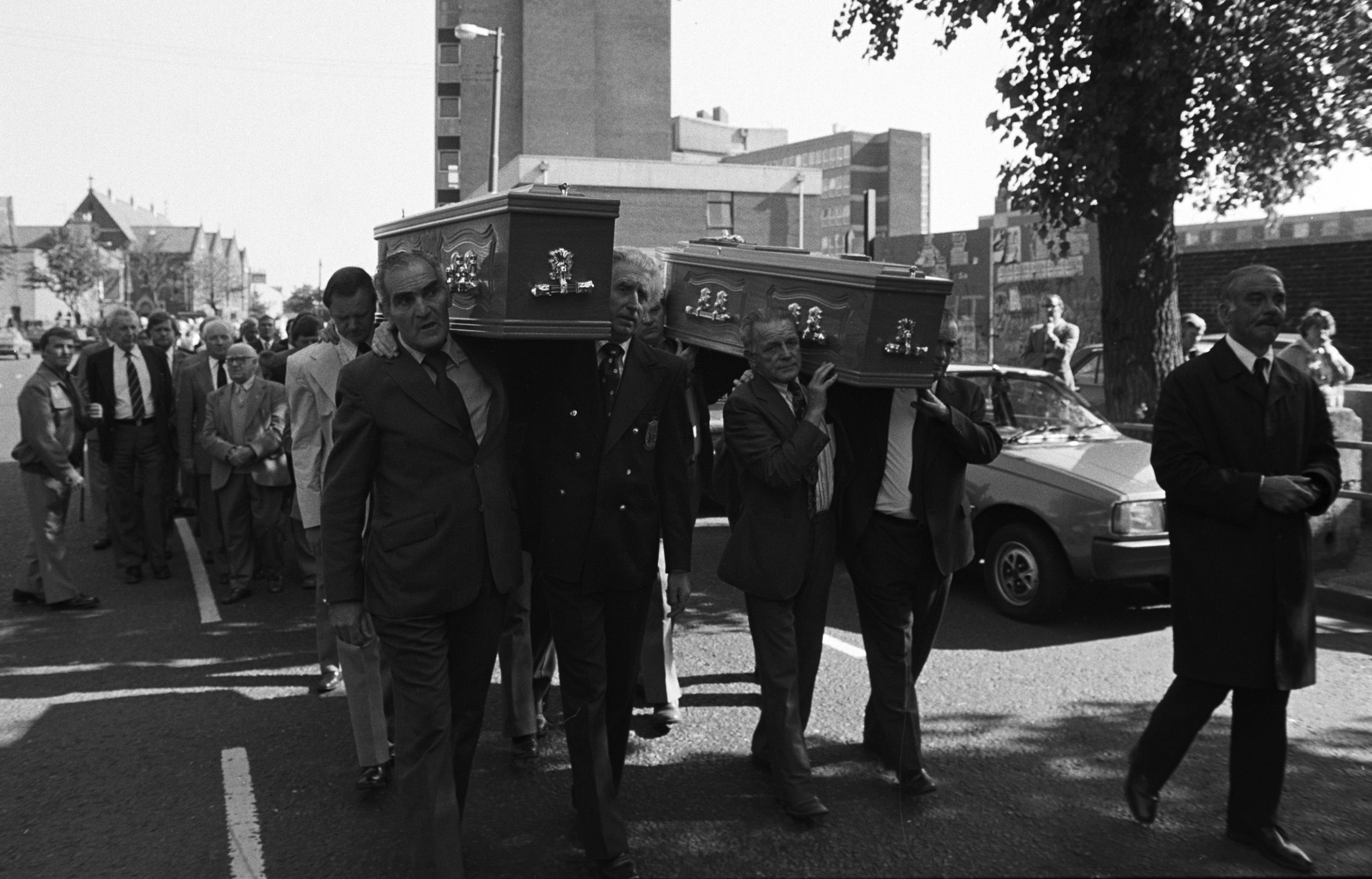 FINAL JOURNEY: The double funeral of Jackie and Jean Vernon on the Falls Road

Jackie and Jean Vernon pass away

Jackie was a well known figure on the Falls Road during the Second World War and was a hero to the many followers who followed Celtic.

In 1947 Jackie was transferred to West Bromwich Albion, whom he captained until he returned to his native Belfast to play and manage the local Crusaders on the Shore Road. He was unique in that he played for the Irish Football Association (six county) and the Football Association of  Ireland (26 counties).

In a recent book ‘Belfast Celtic’ by Mark Tuohy, the times of the great Celtic team were recalled and Jackie’s name appeared time after time. He appeared on the cover of the book and famous contemporaries included Bud Ahearne, Paddy Bonnar, Tommy Breen, Johnny Denver, Hughie Kelly and Charlie Tully.

Those present at yesterday’s double funeral included Tommy Breen, Sean McCann, Paddy Bonnar, Hughie Kelly and the famous Joe Bambrick, and the Falls Road was packed with people who had known or known of the great Jackie Vernon.

AN organisation of families of Catholics murdered by loyalist groups/’security forces’ has been formed.

At a meeting held last Sunday at a New Lodge Road venue, families of eighty murdered Catholics came together and decided to call their action group Silent Too Long.

A nine-person committee representing families from New Barnsley, Turf Lodge, Unity Flats, New Lodge, Ardoyne, the Bone, Newington, Twinbrook and Short Strand was formed under the chairmanship of Mr Séamus McAloran who was responsible for placing the adverts in the Irish News which led to the meeting. Letters were received from murder victims’ families in Derry, Cookstown, Castlewellan, Dungannon, Armagh and other places.

AIMS: Bringing the families together was promoted by the recent spell of publicity given to families of RUC and UDR men killed by the IRA/INLA, and also by the remarks made by loyalist leaders and in Westminster about the “2,000 victims of IRA violence”. These remarks when made were unchallenged by television and newspaper reporters and by Westminster politicians.

1. To create unity and support among the relations of those who have suffered at loyalists’ hands.
2. To press for the proscription of the UDA (who have openly boasted of their involvement in the murder of innocent Catholics.)
3. To show security forces’ involvement in sectarian murders and other crimes.
4. To highlight the dual-membership of ‘security forces’ and loyalist groups.

BOOK OF EVIDENCE: A complete dossier on every one of the murder victims, going back over twelve years, is to be compiled and these, along with other information on the campaign, official and unofficial, against Catholics will be sent all over the world.

Silent Too Long will also arrange world-wide speaking tours for representatives of the murder victims’ families.

Messages of support and offers of assistance have been received from Fr Denis Faul, Dungannon, and Fr Brian Brady, Belfast. The newly-elected committee will visit the families in their own areas in the immediate future.

IN the wake of Owen Carron’s victory in the Fermanagh/South Tyrone by-election, Gerry Adams, vice-president of Sinn Féin, announced that his party would in future contest elections in the Six Counties; and this week Sinn Féin is appealing to all its supporters to get their names on the Electoral Register.

This represents a considerable change in emphasis by Sinn Féin and highlights once again the inherent conflict in the republican movement – whether or not to enter the political arena.

If the Nationalist people of the Six Counties have learned anything over the last sixty years it is that playing the political games according to Britain’s rules, while Britain holds the referee’s whistle, is an exercise in futility and a recipe for violence.

After the traumatic upheaval of 1969 and the proroguing of Stormont in 1972, the only thing that kept the Six County ‘state’ alive as a political entity were the Westminster and local government elections; and Britain protected these last remaining lifelines diligently, even to the point of supplying dozens of armed escorts for the ballot boxes, something she wasn’t prepared to do for many a harassed citizen.

England understands the importance of the system for the maintenance of the Six County ‘state’ and is not too worried who wins or loses or whether they attend or abstain on being elected. The all-important thing is the system and all it represents.

It would be ironic that, just as the SDLP is becoming more and more disillusioned with the political system and what can be gained from participating in it, the Sinn Féin political party come forward and give it a much-needed transfusion.