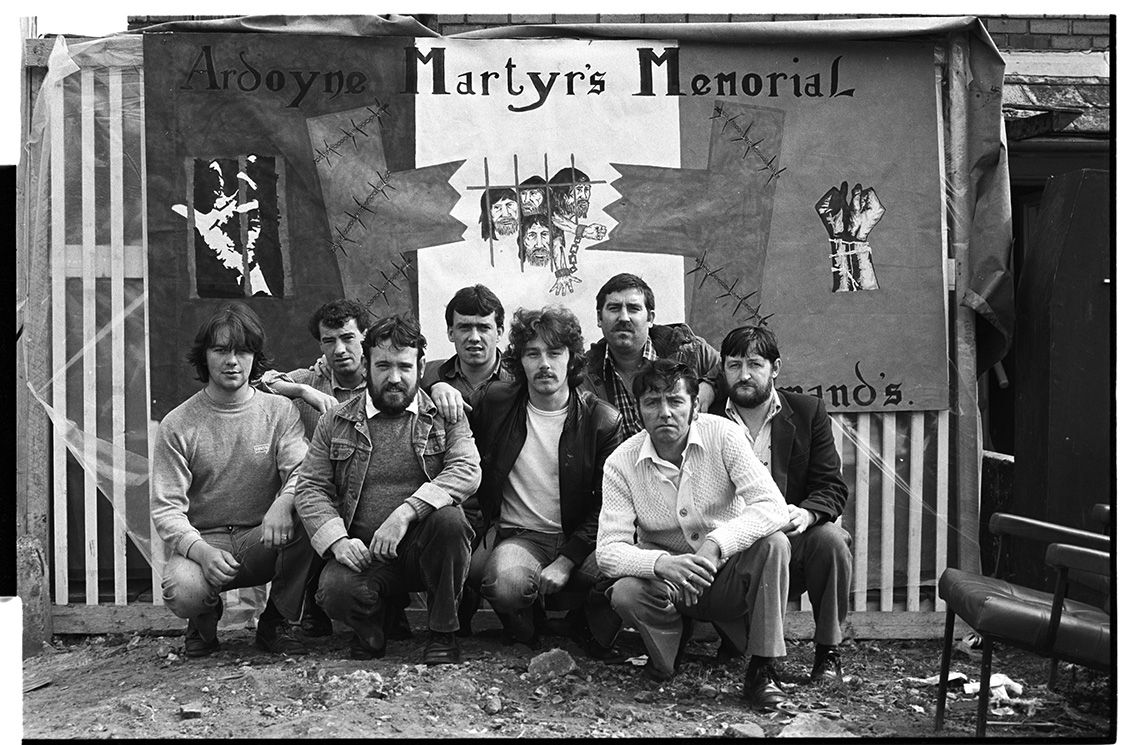 With Andersonstown man John Pickering joining the hunger strike on Monday morning, there are now a total of four West Belfast men on hunger strike.

He joins Jackie McMullan from Andersonstown Park, Pat Sheehan and Bernard Fox, both from the St James’ area. Jackie McMullan is reported to have been sick during a visit on Monday, and when his visitors asked for water for Jackie, the wardens refused to give him any. He had walked all the way to the visiting area, and this had put a lot of exertion on his weakened body. Liam McCloskey from Dungiven is now the foremost hunger striker.

With two Andersonstown men now on hunger strike, the local H-Block Committees are expecting the same show of massive support for their families as was shown for the families of Joe McDonnell and Kieran Doherty.

The Committees are now drawing up plans for an escalation of local protests in support of the prisoners and it is expected that efforts will be concentrated in demonstrating the continuing mass support there is, for the five demands of the hunger strikers.

Relatives of prisoners from West Belfast will be included in the 100 strong delegation to London, where MPs will be lobbied to support the five demands. The determination of H-Block supporters was re-affirmed at the National Conference in Dundalk last Sunday.

With the election of a new, enlarged, committee and the drawing up of plans for the days ahead, it is anticipated that the national and international campaign will grow in intensity and depth until the prisoner’ demands are won. The local H-Block Committees are appealing to people, especially in the greater Andersonstown area, to re-dedicate themselves to attending all local and national demonstrations.

Seven members of the Shamrock Sports and Social Club in Ardoyne held a seven-day fast in protest against the continuing arrogance and sheer vengeful vindictiveness of Margaret Thatcher and her Tory henchmen, who have maliciously turned aside all endeavours and requests from the most reasonable and responsible of sources, including the Catholic hierarchy, the Commission for Justice and Peace, and the Papal Envoy.

They have twice now recently flaunted the wishes of 30,000 voters in Fermanagh/South Tyrone expressed in support of Bobby Sands, and then after changing the rules, in support of Owen Carron. All this in the space of five months.

Ten prisoners have now been allowed to die on this altar of British hatred, because the Wesminster Government still refuses to concede in its blind malevoence that its ‘criminalisation’ policy, lies in ruins.

The seven members, who included William Mallaghan, Christopher Keenan, Patrick McCann, John Christie, Anthony Barnes and Belfast city councillor Laurence Kennedy, were joined by over 50 other members and friends each day on a 24-hour rota basis.

They hope that surely the British government must now recognise that when even moderate Catholic opinion has become so incensed and disillusioned, that it should desert its middle-of-the-road social democrat spokesmen, and turn to those whose extremist methods would seem to offer, however unpalatable, an outlet for their political beliefs and aspirations.

Bishop Daly for Down and Connor

Speculation is mounting in the Diocese of Down and Connor, that Bishop Cathal Daly of Ardagh and Clonmacnoise will take over when Dr Philbin retires next year.

Some influential members of the hierarchy are known to be of the opinion that he is the person most suited to fill this most arduous See in Ireland. Down and Connor is the second largest diocese in the country, and contains about half of the Six Counties’ 600,000 Catholics.

Bishop Daly was born 64 years ago in Ballycastle, Co Antrim and spent a number of years as a philosophy teacher in Queen’s University before being appointed Bishop of Ardagh and Clonmacnoise in 1967.

Dr William Philbin will be 75 years of age next year, and has been Bishop of Down and Connor since 1962. Before that he had been Bishop of Clonfert since 1954.

Dr Philbin is a man of great academic and intellectual ability, but his performance as Bishop during the most turbulent and tragic era in the history of Down and Connor has been looked upon as something of a failure. As the troubles became acute and suffering of his flock became intense, he more and more withdrew into the solitude of his residence on Somerton Road, and cut himself off almost completely from the outside world. His retirement next year will not be viewed with any great regret by the majority of the people in Down and Connor.

Dr Daly, on the other hand, is one of the most vociferous and politically minded bishops in Ireland, having spoken and written frequently on the political situation in the North. His pronouncements have been marked by a serious lack of understanding of the true situation of ordinary Catholics in Down and Connor, and especially in the Catholic ghettoes of Belfast. This is not surprising, given his academic background, and the fact that his present diocese contains only 1,500 Protestants in total.

This lack of understanding and the fact that he is 64 years of age could mitigate against his being appointed. But, we can be sure that a Cathal Daly in Somerton Road would be controversial and interesting.