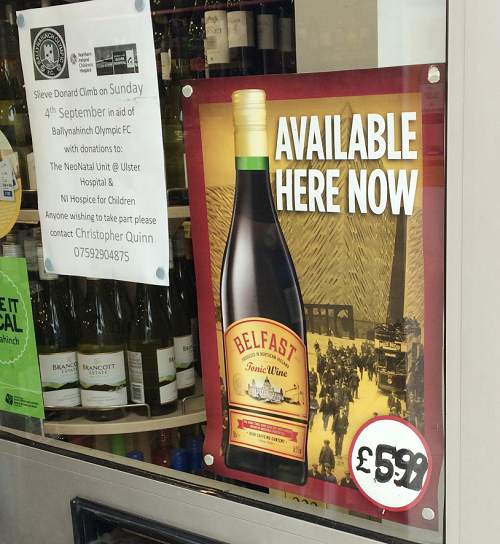 Squinter never really understood why Buckfast never took off in Belfast. Oh, you’ll see the odd bottle lying in the gutter after an Orange parade, but it’ll have been left there by visitors from up the country. And you’ll see it being happily necked in the Holyland on Paddy’s Day but, again, them’s the hicks from up the sticks. Armagh ones, mostly, for the tonic wine made by Catholic monks in Buckfast Abbey, Devon, is so popular in the Orchard County that it has come to be known as ‘Lurgan Champagne’.

All that could be about to end if this new venture catches on. Belfast Tonic Wine is now advertising its wares on the doors of offies the length and breadth of Our Wee Country and we wait to see whether they will make any inroads into a) the pre-eminence of Buckfast in the Smick tonic wine market and b) the disinterest in the product of the greater Belfast public.

It looks remarkably similar to Buckfast, which won’t do its prospects any harm. The bottle’s identical, the label’s the same colour, so the chances are it’ll get picked up by mistake – particularly if the buyer already has already downed a bottle or two – and that won’t do sales any harm. Plus you’ll see there on the sign that Belfast Tonic Wine is £5.99. Not being a Buckfast aficianado, Squinter had to go online to ascertain the average price of the same-size bottle of Buckie, and it turns out the Belfast job is around a pound cheaper, not insubstantial when you’re downing these bad boys as frequently as they do in Kilwilkie; that works out at a saving of around 16 per cent, or an average of three grand a year.

Good luck to Belfast Tonic Wine – they’ve a tough job weaning the blue bag brigade away from jumbo boxes of Budweiser and the pastel-coloured delights of the dizzying range of alcopops lining the offie shelves. Can we expect to see empty Belfast Buckie bottles round the remains of the wheelie bin fires on Monday mornings any time soon?

We’ll see, but in the meantime Squinter’s holding on to his shares in WKD.