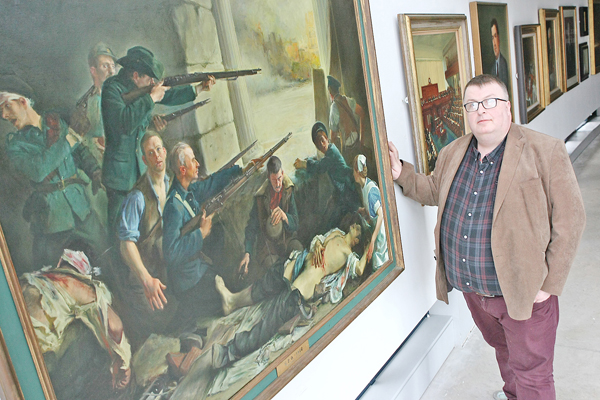 AS Easter approaches and the patriotic spirit is on the rise, there’s no better time to visit the Gerard Dillon Gallery in the Cultúrlann where a rarely seen depiction of the 1916 Easter Rising is on display in an exhibition by renowned Irish artist Thomas Ryan.

The painting depicts rebels firing at approaching British forces while under heavy fire themselves. On the ground behind the rebels a mortally wounded volunteer is being tended by a nurse while on a table beside them another volunteer lies dead.

Thomas Ryan painted GPO 1916 in 1966 to mark the 50 years commemoration of the Rising.  He presented it to the State on loan, along with other paintings. The 1916 painting was hung in the office of the Ceann Comhairle where it remained out of public sight virtually until a few years ago when the artist sought its return along with the other paintings.

“I’m delighted that the painting is now reaching a wider audience and I am thrilled with the prominence being given to it by the Gerard Dillon Gallery in the Cultúrlann,” said Thomas Ryan.  “It’s hard to believe, maybe, but there’s only one other painting of the 1916 Rising and that’s by an English artist.”

Among the other paintings on display is a scene from the Dáil in 1963, a work which was also displayed in Leinster House. The collection includes a portrait of John Hume in his younger years and two other works of Belfast interest.

There are several other paintings by the artist – who spent many years as President of the Royal Hibernian Academy in Dublin – on display, some with religious themes reflecting the artists deep spiritual convictions and others showing scenes from Irish history as well as household and garden scenes.

The exhibition remains on display in Dánlann Gerard Dillon in the Cultúrlann until the end of April. Upstairs in the Ballaí Bána Gallery is an exhibition of humourous cartoons by illustrator Seamus Dunbar, a series which featured in a book by Irish language author and Kila member Rossa Ó Snodaigh about Irish language homonynms, words which sound alike but have totally different meanings.

The Cultúrlann galleries open daily from 10am to 5pm each day.  They’re often open in the evenings too as they host different events. On April 13, singer Diane Cannon, who hails from Gort a’Choirce in the Donegal Gaeltacht, will launch her first single at an event in the Gerard Dillon Gallery.