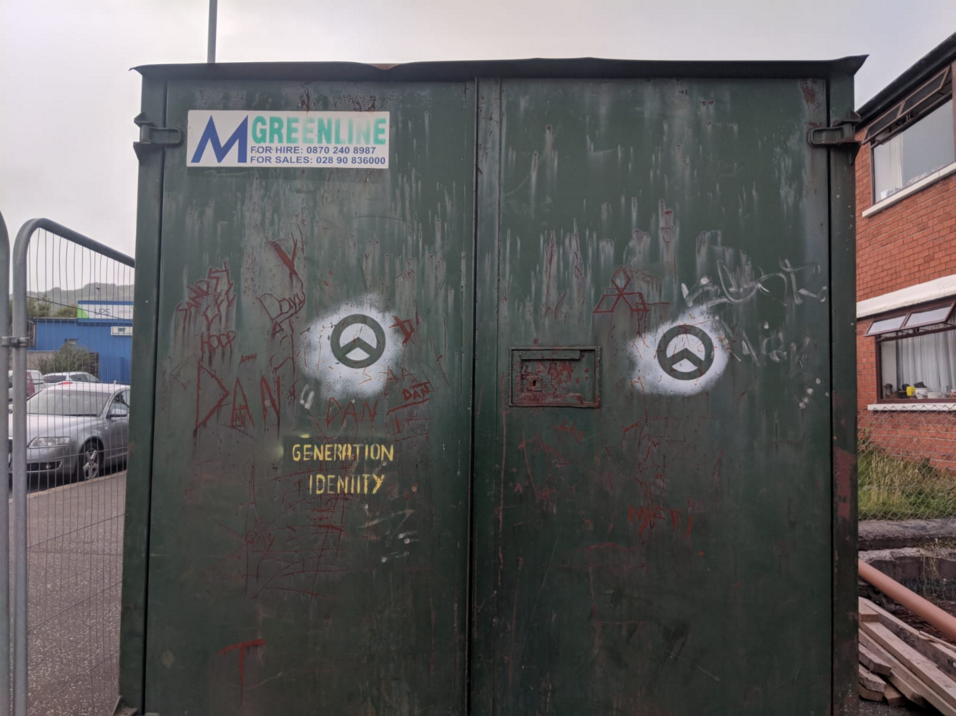 The graffiti appeared on the Cavehill Road

A SINN Féin councillor has stressed the importance of challenging the far-right after the appearance of graffiti promoting a new fascist group in North Belfast.
Logos representing the white supremacist Generation Identity movement were daubed on street furniture on the Cavehill Road, but were quickly removed due to the fast actions of Cllr Mary Ellen Campbell and maintenance workers from the Belfast City Council.
Generation Identity describe themselves as a “movement aimed at preserving the ethnocultural identity of Europe”, and are active in 13 countries across Europe and North America.
The shadowy group has been trying to gain a foothold in the North and have already been involved in a number of public demonstrations.
Last month they were part of the “Free Tommy Robinson” rally at City Hall where demonstrators were pictured giving Nazi salutes.
Speaking to the North Belfast News, Cllr Campbell said that fascist graffiti has become a more common occurrence in recent times.
“It’s about the fourth or fifth time I have had to get this type of graffiti removed in the area,” she said.
“We need to keep challenging them to prevent them gaining a foothold.
“More and more people are questioning what it is because they started putting their logo up. If you look at their logo it isn’t immediately recognisable, it’s not a swastika, but people need to be looking at it as such.
“North Belfast is a very culturally diverse area and we don’t want anybody with that negative agenda organising here.
“We can see what they are doing outside City Hall and we can see what they are doing in other countries. North Belfast is a welcoming area and that’s the positivity that we want to promote.
“Thankfully the Council removed the graffiti almost immediately after I reported it.
“The people of this area have been very welcoming to families that are here from Syria and other countries. We’re a diverse part of the city and that’s the part of the city that I want to live in and promote.”