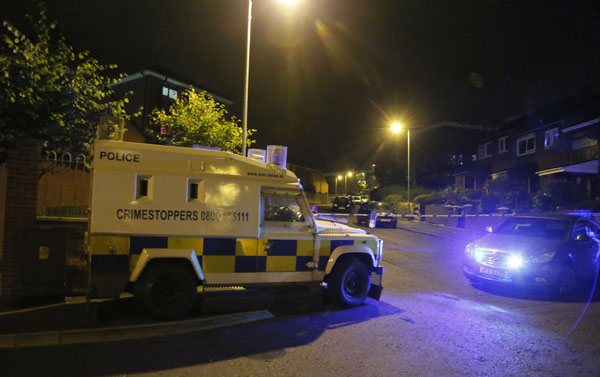 A FEARED UDA gunman who built up a lucrative criminal empire in the wake of the Troubles, was shot dead last night in North Belfast.

John ‘Bonzer’ Boreland was gunned down in Sunningdale Gardens near Ballysillan shortly before 10pm with speculation on who carried out the hit focusing on other UDA factions or members of the criminal underworld.

Boreland, who was a close associate of prominent loyalist Andre Shoukri, had served a number of sentences for UDA-related activity and was killed almost two years to the day he suffered gunshot wounds after a clash in Ballysillan.

Two leading loyalists, John Bunting and John Howcroft, were arrested and charged with the attack but they were later released when the victims withdrew their statements.

That shooting followed the ousting of a pro-peace process faction of the UDA from power in North Belfast and came after a number of people had been forced from their homes in Tigers Bay.

However, a source close to the dissident UDA faction that eventually gained the upper hand told the North Belfast News that Shoukri and Boreland were not behind the overthrow.

Boreland, who served time in prison for extortion, was heavily involved in sectarian violence that flared in North Belfast around 15 years ago and was suspected to be the gunman in the attempted murder of a Catholic publican who only escaped when he ran from the back of his premises after recognising Boreland as he approached him with a weapon.

There’s speculation that he was killed by another UDA faction or because of a fall-out within the criminal circles in which he operated.

Sinn Féin MLA Gerry Kelly condemned the killing.The shooting dead of a man in the Ballysillan area of North Belfast last night was wrong and I condemn it unreservedly,” he said."I call on anyone with information on this shooting to bring it forward to the police so those responsible can be caught and taken off the streets.“The people behind this attack want to plunge us back to the past. They must not be allowed to succeed.“I am calling on local political leaders and people with influence in the community and civic society to do all in their power to prevent any further attacks or any escalation of what appears to be internal loyalist feuding.”

Nichola Mallon from the SDLP called for calm after the murder."It is shocking to hear that another life has been taken in north Belfast,” she said. “There are real concerns in the community that this could lead to further acts of violence. I am calling for calm to allow the police to carry out a full investigation, and bring those responsible to justice.

"The people of North Belfast wake up to news of this kind far too often. There was never any justification for this violence and there never will be.

"I urge anyone who saw anything or believes they may have any information about this murder to contact the PSNI."