Finishing touches being put to new Cultúrlann ahead of grand opening 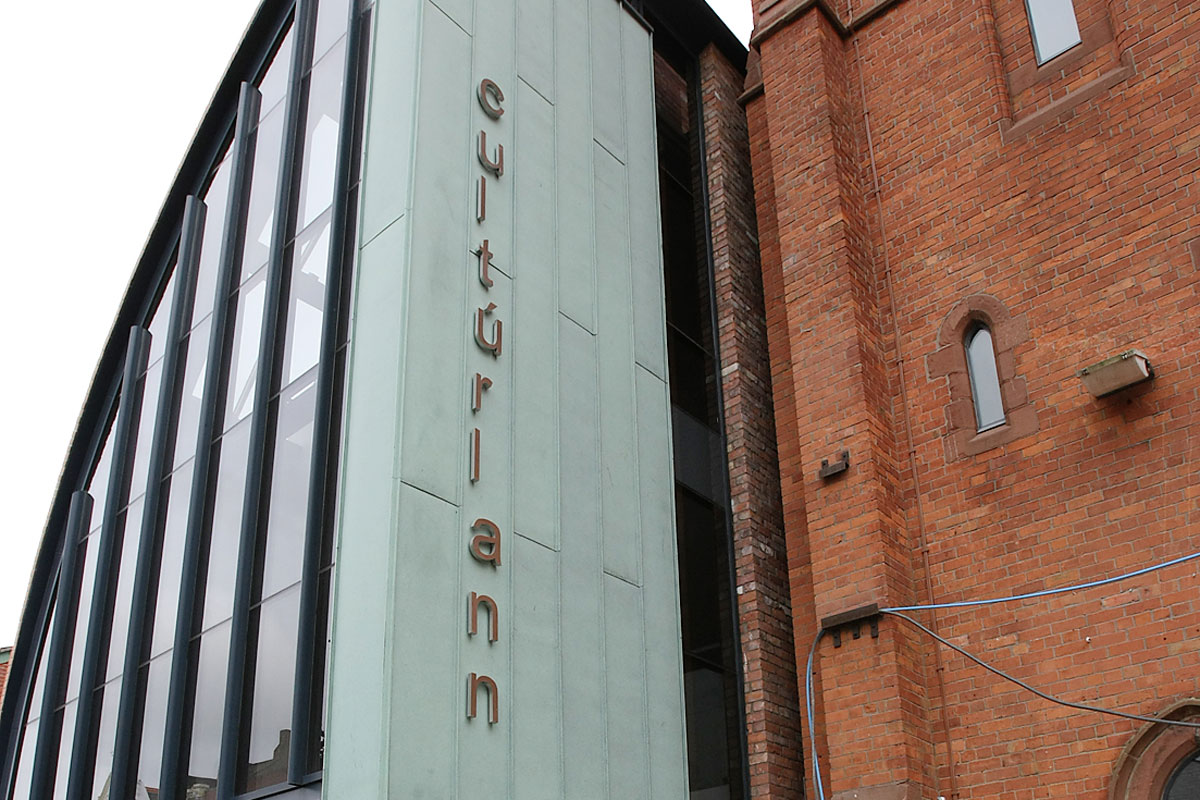 AMIDST the sound of hammering and sawing and  the smell of new paint, I watched the finishing touches being put to the Cultúrlann’s £1.9 million refurbishment ahead of its official unveiling on Monday.

A landmark building in the heart of West Belfast’s Gaeltacht Quarter, the building has been undergoing extensive work to incorporate a new exhibition area, the Gerard Dillion Art Gallery, where regular exhibitions will take place, and an interactive “interpretive space”, where visitors can learn of the development of the Irish language in Belfast.

Sitting in what will be her new office, a former dingy attic now flooded with light and colour, Cultúrlann Director Eimear Ní Mhathúna told the Andersonstown News the next few days really will be a case  of “all hands on deck”.

“We are all so excited at the extension to the building,” she said. “We have been waiting on the funding to make this type of development happen since 2003 and now we have it, which is fantastic.”

Eimear said she hopes the new Cultúrlann can be a catalyst for other things to happen in the Gaeltacht Quarter.

“There is a great sense of excitement in the area, not to mention among the staff. People are proud to see this happening in their own area. I think it’s a massive boost for everybody, the Gaeltacht Quarter is starting to happen and there is a real multicultural feel to the place and a real celebration of diversity. People are always made to feel welcome here – the Cultúrlann is, and always has been, open to everybody,” she said.

The new art gallery with its striking glass is the sight that will grab commuters the most as they travel up and down the Falls Road. The Cultúrlann has also built on a roof-top terrace for sessions, poetry readings and an extra event space. President Mary McAleese will officially open the new extension on Monday, a fitting choice, as Eimear says she has been “great for Ireland”.

“For ages people were saying ‘Oh, you have to invite her for this and that,’ but I wanted to invite her for this and it’s really cool that just before she leaves office we have managed to get her. She has been great for the North of Ireland, there is no doubt about it. She has been really inclusive and she, more than anybody else, should be with us when we celebrate on Monday.”

But the opening is not the end of the hard  work.

“Following on from the launch we have a string of events happening over Culture Night with a street céilidh planned, a family fun day for the Saturday and a concert on the Sunday. We intend to start offering tours of the building twice a day and that is really what it is all about – we want people to come in and see the building for themselves and what the Cultúrlann has to offer.”

Describing the development as “an exciting new centre”, a spokesperson for the Arts Council said: “The new multifunctional centre, which serves all sections of the community and visitors to the city, will enhance the Irish language and the arts and cultural infrastructure of West Belfast and Northern Ireland as a whole.”