DÚLRA: First-time visit to the lake by the lough 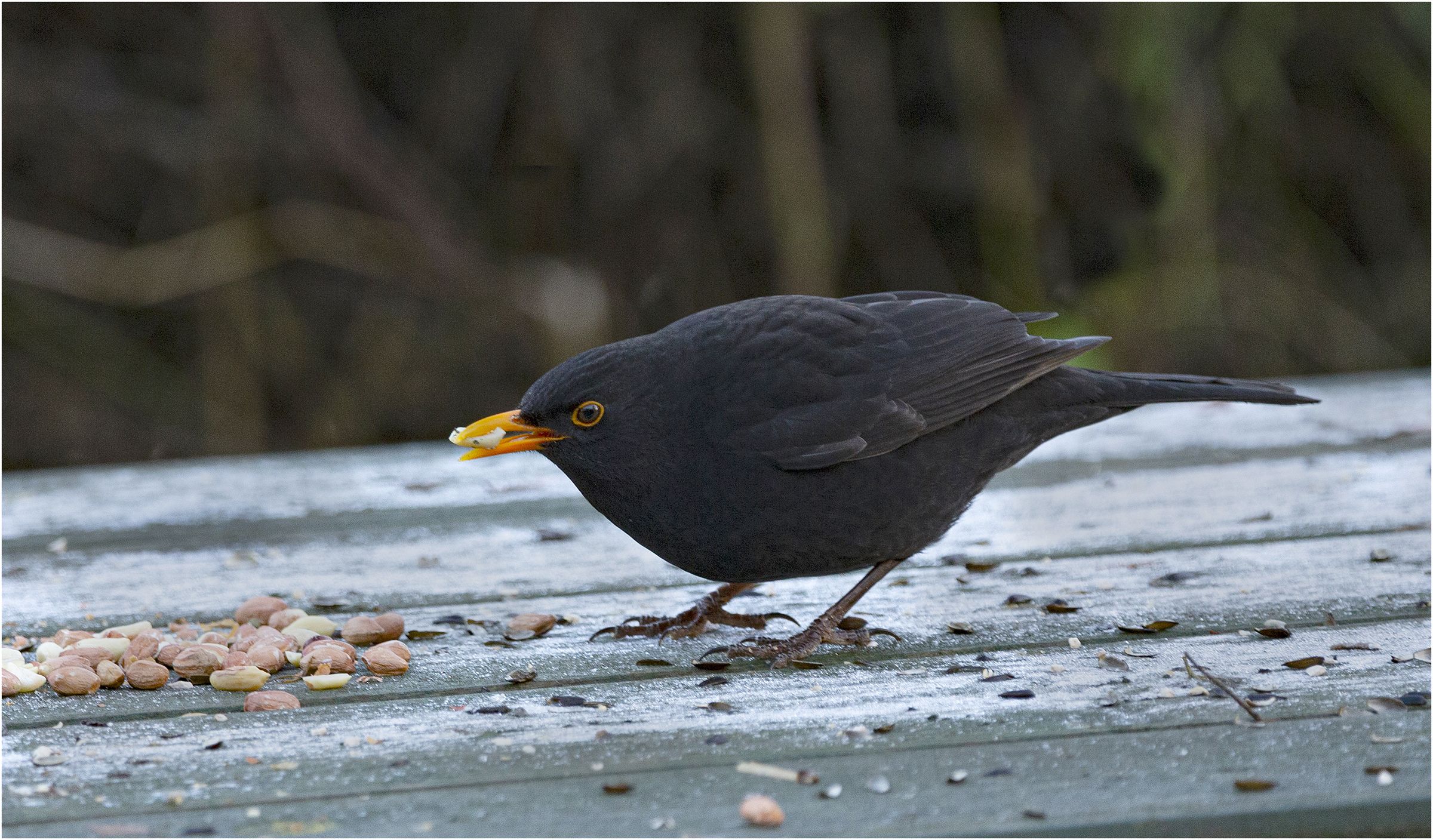 MEAL TIME: A blackbird feasts on peanuts on a Portmore picnic table (pic by Dónal Collins)

“I’M off up the country,” said Dúlra as he nipped out the back door this week.
“Enjoy,” came the reply, “pick up some eggs if you can, we’re out of them.”
Dúlra was heading for Portmore, the nature reserve a few miles from Crumlin. In all his years he’d never been there, and lockdown gave him an opportunity to tick another place off his bucket list.

Driving through Crumlin, he considered stopping at a garage to get those eggs, but decided he’d do it on the way back. The sun was low in the sky and Google Maps showed Portmore at the end of a maze of back roads.

It’s a perfectly round lake as if man-made. But Portmore – from the Irish Loch an Phoirt Mhór – is as old as the nearby Lough Neagh, which although Ireland’s largest lake, is rarely seen by anyone who doesn’t live on its banks.

Dúlra has spent half a century living 15 miles from this giant water mass, but he’s only seen it at close quarters on a handful of occasions. It’s just so inaccessible, with few if any signposts directing visitors to what should be a major tourist attraction.

This week he turned a corner as he approached Portmore and suddenly Lough Neagh opened up before him, its waves lapping the shore as lapwing and migrant swans fed on its banks. He's never seen it before in all its glory.

By the way, if anyone wants to show off their knowledge of Irish, Loch nEathach will do the trick. All nouns in Irish are either masculine and feminine – but many centuries ago there was a third gender – neutral. Neutral words eclipsed the following word – and loch was one of these ancient neutral words, explaining the ‘n’ in front of Eathach!

Anyway, Dúlra’s interest was this week in the smaller lake, Portmore. There are hides here for people to watch the water birds and a viewing platform overlooking the lake. Beyond the high reeds were huge flocks of birds – the largest was made up of around 1,000 tufted duck from northern Europe, but the others were too far away for Dúlra to identify even with binoculars.

There are plenty of forest and garden birds in the surrounding area thanks to the RSPB – although again Dúlra’s phone camera was almost useless in the weak winter light. But there was an expert on hand – West Belfast photographer Dónal Collins had an impressive camera on a stand and was taking snaps.

“I love coming here because the birds are so tame,” he told Dúlra.
His pictures – like this male blackbird and flying swans – are nothing short of amazing, with every tiny speck visible.

Portmore would have been very different in past centuries. It used to be surrounded by incredible oak forests to rival the Amazon rainforests. And it was at Portmore that one of the most famous of all the oaks stood until it was fell by a windstorm in 1760.

It was soon time for Dúlra to leave Portmore behind and head back to the city. As he was travelling up the lane from the reserve, he noticed this wee wooden yellow house at the roadside. Inside were boxes of fresh farm eggs alongside the words ‘£3 for a dozen’, with a slot cut in the wood to slide your change into. A rural transaction that depends totally on honesty.

A dozen of County Antrim’s freshest eggs under his arm, Dúlra returned home to a delighted family.